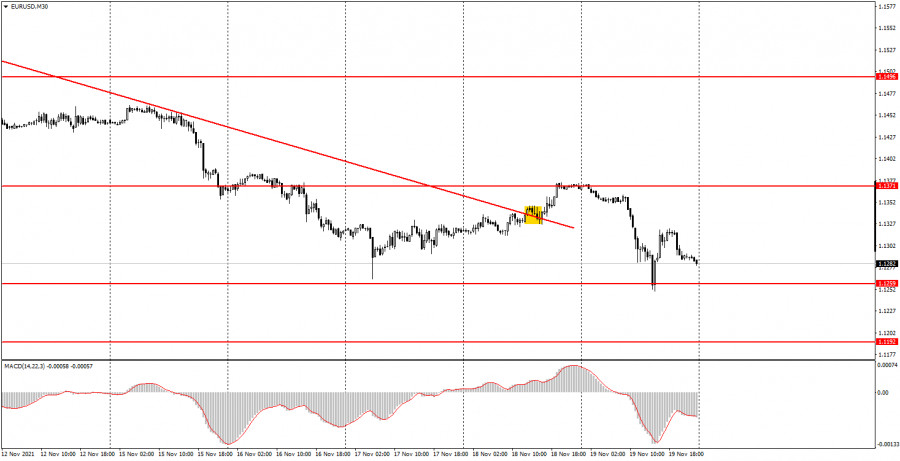 Late at night on Friday, the EUR/USD pair bounced off the level of 1.1371 and fell to 1.1259 during the day, showing very strong volatility which is extremely rare for this pair. Nevertheless, the 30-minute time frame clearly shows that the price movement on Friday was very decent. This gave hope for strong and profitable trading signals. It should be noted right away that after the downtrend was broken, the uptrend had not been formed, and the upside movement did not continue. So at the moment, the downtrend continues, but this time without a trendline. The situation is now difficult for the euro. Its fall has intensified in recent weeks. On the one hand, an upward correction is unfolding. However, markets may continue to get rid of the euro. On Friday, for example, there were two statements made by Christine Lagarde that delivered a hard blow to the European currency. Still, market participants did not rush to sell off the euro. At the same time, not much is left for EUR when the head of the ECB keeps making extremely dovish statements throughout the week. 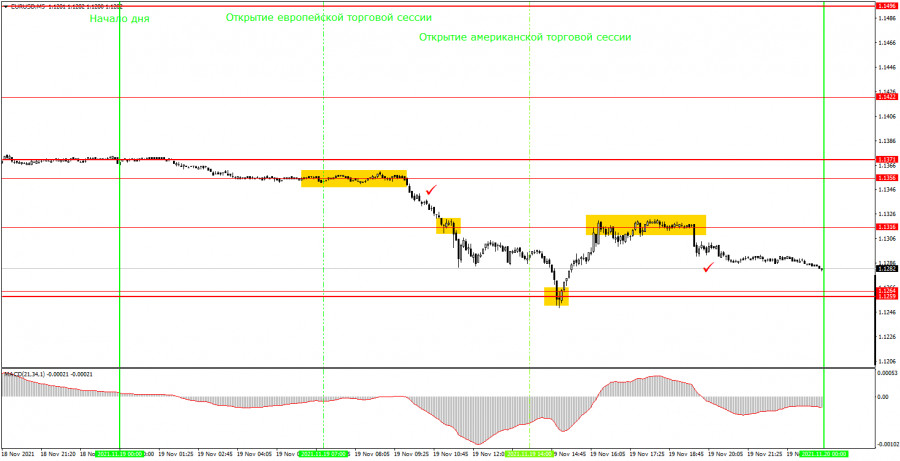 On the 5-minute time frame, the technical picture was almost perfect on Friday. First of all, as we have mentioned before, the price movement was rather strong. Secondly, as you can see in the illustration above, all the key levels have been tested with perfect accuracy. Let's take a look at the trading signals. The first was formed at the beginning of the European session when the price consolidated below the level of 1.1356. This is where novice traders had to open short positions. Subsequently, the price dropped to the level of 1.1316 and broke through it which is why it was necessary to keep short positions open. Then, the price dropped to the area of 1.1264 - 1.1259 from which it made a perfect rebound. Therefore, a sell trade should be closed either by Take Profit, which would have brought 30-40 pips of profit, or on a rebound from the level of 1.1264, which would have brought a profit of 70 pips. On a rebound from the level of 1.1264, a long position should have been opened. In the next two hours, the price tested the level of 1.1316 but was unable to overcome it, having pulled back from it as a result. Thus, the buy trade should have been closed around this level, which would have brought us another 26 pips. Thus, at least 56 pips could have been earned on Friday.

On the 30-minute time frame, the downtrend was canceled, while the uptrend has not formed yet. Therefore, the situation is now unclear, and it is better to wait for more certainty. On the 5-minute time frame, the key levels for November 22 are found at 1.1259 - 1.1264, 1.1356, and 1.1371. Take Profit should be set at a distance of 30-40 points. Stop Loss should be placed to a breakeven point as soon as the price passes 15 pips in the right direction. On the M5 chart, the nearest level could serve as a target unless it is located too close or too far away. If it is, then you should act according to the situation or trade with a Take Profit. On Monday, no interesting events and publications are planned either in the EU or in the US. Therefore, during the day, novice traders will have nothing to pay attention to. However, this does not mean that the movement will be weak. The euro may well continue to fall against the US dollar.