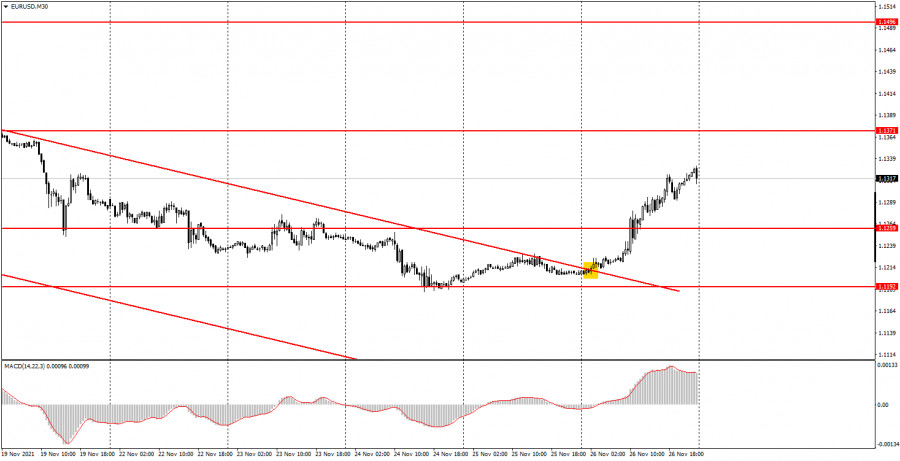 The EUR/USD pair abruptly and unexpectedly began an upward movement on Friday. However, one can talk about surprises for a long time, but strong movements are often unexpected. The main thing is that novice traders had to be ready for an upward movement, as the pair settled above the descending channel at night, thus forming a buy signal. Therefore, at that moment, on the 30-minute timeframe, it was possible to open long positions. What is important: at the time when the European trading session opened, the price moved away from the point of formation of a buy signal by only 5-7 points. Therefore, even with a delay of several hours, long positions could be opened. As a result, the pair passed about 120 points in a day, which could be obtained on this TF. There is absolutely nothing to single out from macroeconomic statistics or fundamental events. Another speech by European Central Bank President Christine Lagarde gave absolutely nothing to the markets. Thus, it was only possible to rely on "technique" when making trading decisions. From our point of view, the euro started to rise due to the need to correct from time to time. 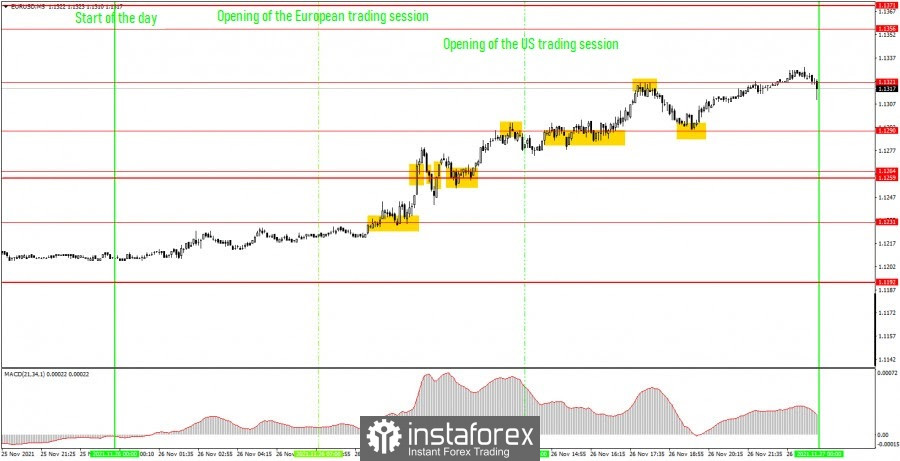 The picture was very interesting on the 5-minute timeframe on Friday. Despite the fact that at the end of the day the pair rose by as much as 120 points, which is a lot for it, it cannot be said that the movement was one-way. During the day, many levels were overcome and worked out and a lot of signals were formed. But here it is very important to understand that from the very morning we already had a buy signal at the 30-minute TF. Consequently, since we do not expect a profit of 30-40 points by Take Profit on the higher chart, the deal could be kept open until the evening. In this case, all signals from the 5-minute TF should be ignored. However, let's consider an option in which novice traders traded on the 5-minute TF. The first buy signal was formed after breaking the level of 1.1231. It was necessary to open long positions, and close them - after the price settled below the level of 1.1259. Profit - 13 points. The same signal should have been used to open short positions, but the signal turned out to be false, so the upward movement resumed, and the price almost immediately re-settled above the levels of 1.1259 - 1.1264. Subsequently, the nearest target level at 1.1290 was reached. As a result, a loss of 15 points was obtained on a short position, and a profit of 10 on a long position. Since a rebound followed from the level of 1.1290, it should also have been worked out by selling. But this signal also turned out to be false, and the upward movement resumed again. As a result, there is still a loss of 17 points. At the US session, the level of 1.1290 was overcome again - a buy signal - new longs and being able to perfectly reach the 1.1321 level. Profit 16 points. A rebound from the level of 1.1321 - a sell signal - development of the level of 1.1290 - profit for another 10-15 points. The last buy signal should not have been worked out. As a result, newcomers were left with low profits.

The downward trend reversed on the 30-minute timeframe. Thus, the euro may now continue to rise, but the movement is unlikely to be as strong as on Friday. The key levels for November 29 on the 5-minute timeframe are 1.1259, 1.1290, 1.1321, 1.1356, 1.1371. Take Profit, as before, is set at a distance of 30-40 points. Stop Loss - to breakeven when the price passes in the right direction by 15 points. At the 5M TF, the target can be the nearest level if it is not too close or too far away. If it is, then you should act according to the situation or work according to Take Profit. Neither the European Union nor the United States will have any interesting events and publications on Monday. Thus, novice traders will have nothing to pay attention to, and the volatility may be low.