How to trade EUR/USD on November 8? Simple tips for beginners. Friday was much more boring than it could have been 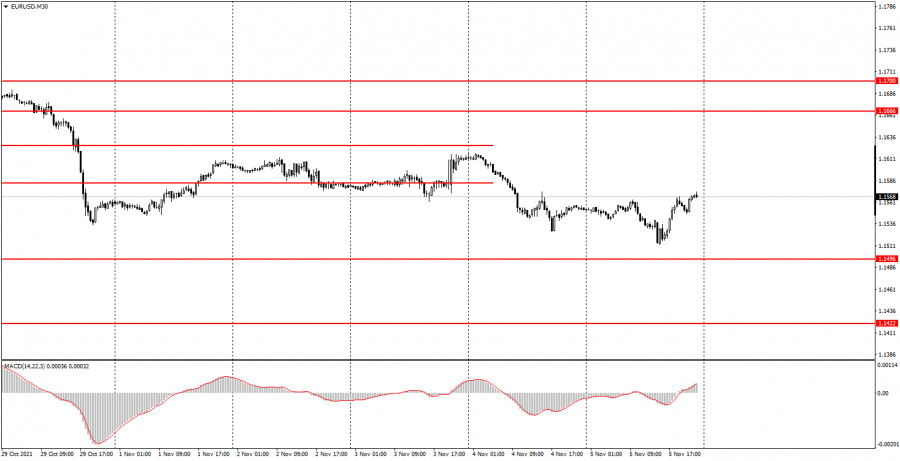 The EUR/USD pair was trading fairly average on Friday. The volatility of the trading day was just over 60 points, which is a "normal" value for the euro/dollar pair. There was also no clear direction of movement during the day. Just as it has not been observed in general on the 30-minute TF over the past few weeks. Thus, the technical picture on this timeframe has not changed at all, even after such a crazy week. We remind novice traders that the results of the Federal Reserve meeting were summed up in the United States this week, after which the US dollar fell 40 points on Wednesday, and it rose by 90 on Thursday. An equally significant NonFarm Payrolls report was published on Friday, which, however, did not provoke the movement that the markets expected. In other words, the report turned out to be stronger than expected, but this did not cause a new rise in the US dollar. This is called an illogical market reaction, and this phenomenon also happens from time to time. Thus, there is still no trend, there is no trend, there is no trend line. 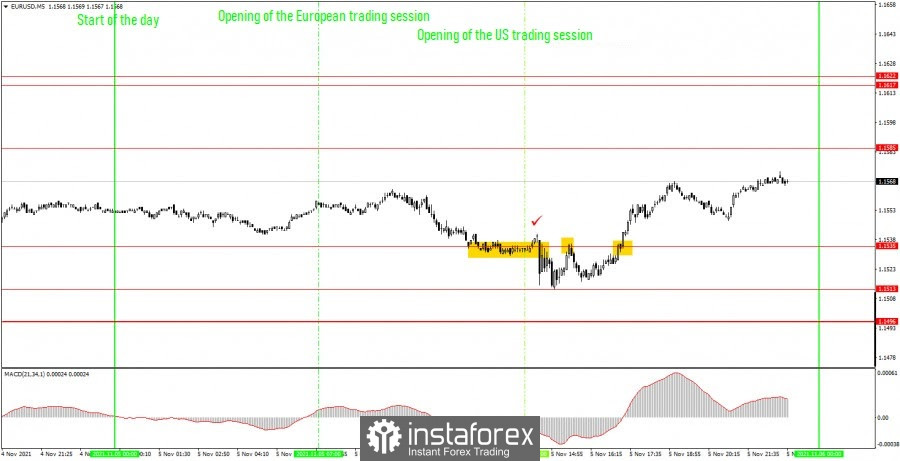 On the 5-minute timeframe, the movement on Friday was quite strange. Several trading signals were generated, but almost all of them had to be filtered out. Let's take a closer look at how to trade on Friday. The first sell signal was formed when the NonFarm Payrolls report was published in the US. In addition, an unemployment report was also published, which also turned out to be better than forecasts. However, the US currency managed to strengthen by only 20 points, and it was at this time that the rebound from the level of 1.1535 formally happened. There was no 1.1513 level on Friday yet, this level is the day's low. Thus, we do not work out the first signal. The second rebound from the level of 1.1535 happened a little later, but we would also advise ignoring it, because US reports turned out to be unequivocally in favor of the dollar, but the price was moving up at the time of the formation of this signal. Incongruity. But the last buy signal could be worked out, since by that time it had already become clear that traders had ignored important reports from America. However, the long position brought only 20 points of profit and it had to be closed manually, since the price could not reach the nearest level.

There is still no trend or horizontal channel on the 30-minute timeframe at this time. Therefore, the current movement still defies description. We still do not recommend tracking signals from the MACD indicator, but we advise you to wait for the formation of a trend line or trend channel. The key levels on the 5-minute timeframe for November 8 are 1,1496, 1,1513, 1,1535, 1,1585, 1,1617 – 1,1622. Take Profit, as before, we set at a distance of 30-40 points. Stop Loss - breakeven when the price passes in the right direction by 15 points. At 5M TF, the target can be the nearest level, if it is not located too close or too far away. If it is located– then you should act on the situation or work on Take Profit. Monday will be an absolutely boring day, since important macroeconomic events either in the United States or in the European Union are not planned for this day. Thus, volatility on this day can seriously decrease (up to 40 points, for example).

Interesting? Write a comment below.
 How to trade EUR/USD on November 8? Simple tips for beginners. Friday was much more boring than it could have been
Forward 
Backward 