How to trade GBP/USD on November 15? Simple tips for beginners. The pound started a new round of correction on Friday 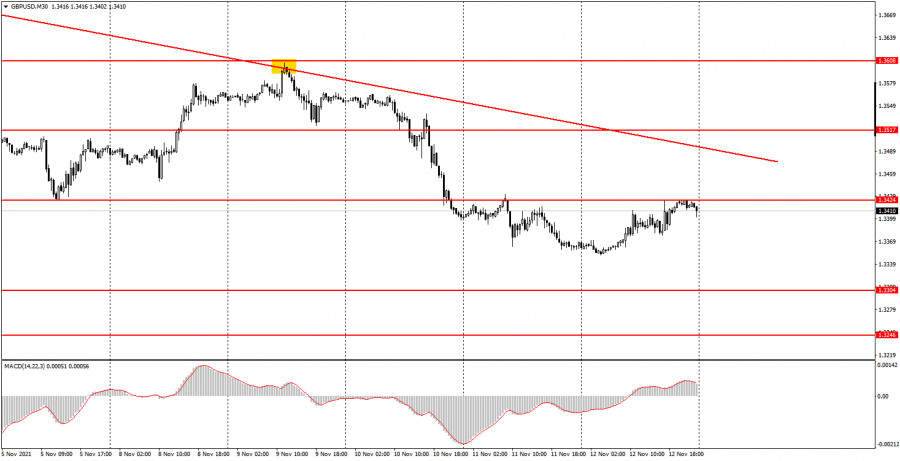 The GBP/USD pair corrected on the 30-minute timeframe on Friday, November 12. This correction was the logical end of the trading week. Recall that the pound is still in a strong downward trend with a trend line, from which the price has rebounded several times. Since no trend can be recoilless, an upward movement on Friday, especially after a strong fall on Tuesday, Wednesday and Thursday, was absolutely logical. At the moment, the pair has corrected to the level of 1.3424, from which it can bounce to resume its downward movement. Correction to the trend line may also continue. Therefore, for now, we are still considering the option with a further drop in the pound. There were no interesting macroeconomic publications on Friday. There were also no fundamental events. Therefore, traders had nothing to react to during the day. It will be possible to speak about the end of the downward trend only after the price settles above the trend line. Volatility on Friday was rather weak for the pound. Only 70 points. 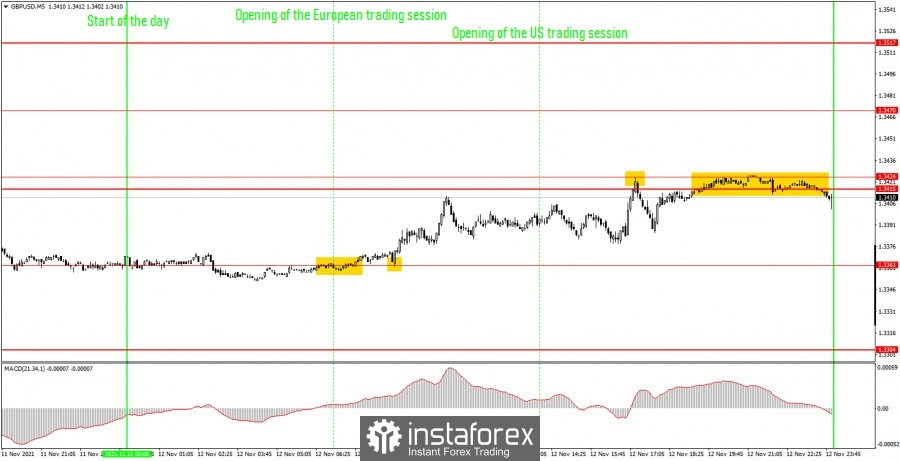 There were at least three trading signals on the 5-minute timeframe on Friday. And they were good enough and profitable. Let's take a look at them and understand how you should trade. The first buy signal was formed at the very beginning of the European trading session in the form of a rebound from the level of 1.3363. And within an hour, it was duplicated by another rebound from the same level. Therefore, it should have been worked out with long positions. After the formation of this signal, the pair went up exactly 50 points, and also reached the levels of 1.3415 and 1.3424, from which it rebounded. Thus, novice traders could get 40-50 pips of profit on this trade in almost any case. At least by Take Profit, or by manual closing. On the signal of a rebound from the level of 1.3424, a deal should also have been opened, but already for short positions. However, this time the price moved in the right direction by only 23 points, which was enough only to set Stop Loss to breakeven. The deal was closed on this order, as the price returned to the levels of 1.3415 and 1.3424. Thus, neither profit nor loss was received on the second deal.

At this time, the downward trend continues on the 30-minute timeframe. Now we need to understand whether the pair will be able to overcome the level of 1.3424, from which it rebounded several times in the past. If yes, then the upward movement will continue, if not, then the downward movement will resume. On the 5-minute timeframe, the important levels are 1.3304, 1.3363, 1.3415-1.3424, 1.3470, 1.3517. We recommend trading on them on Monday. The price can bounce off them or overcome them. As before, we set Take Profit at a distance of 40-50 points. At the 5M TF, you can use all the nearest levels as targets, but then you need to take profit, taking into account the strength of the movement. When passing 20 points in the right direction, we recommend setting Stop Loss to breakeven. Novice traders will have nothing to pay attention to on November 15, since nothing interesting is planned for the first trading day in America and Great Britain.

Interesting? Write a comment below.
 How to trade GBP/USD on November 15? Simple tips for beginners. The pound started a new round of correction on Friday
Forward 
Backward 