How to trade GBP/USD on November 22? Simple tips for beginners. A great day for novice traders 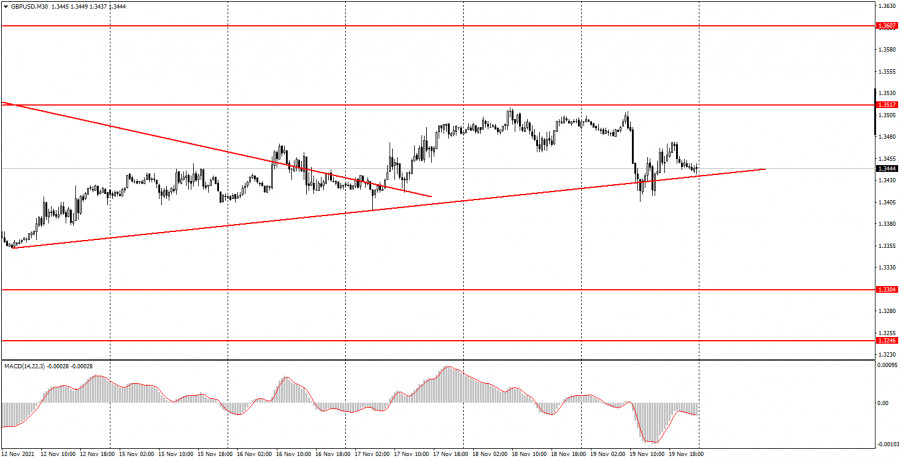 The GBP/USD pair began to correct against a weak upward trend on the 30-minute timeframe on Friday, November 19. The trend is weak because the trendline has a very weak slope, as we discussed earlier. After the quotes of the pound/dollar pair dropped to it, there were two breakouts. Thus, at this time it is impossible to make an unambiguous conclusion that the upward trend has continued. Thus, the situation is ambiguous on the 30-minute TF. There were very few macroeconomic statistics on Friday - only the report on retail trade to the UK. Despite the fact that this report turned out to be better than forecasted, the pound collapsed in sync with the euro on the last trading day of this week. Thus, we can say that the macroeconomic background had no effect on the movement of the pair. Now you should analyze the lower timeframe, as the current picture is ambiguous. 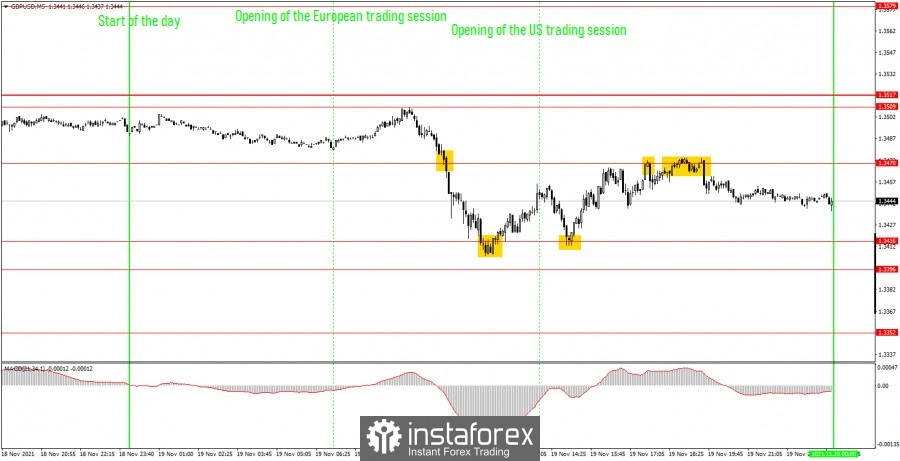 On the 5-minute timeframe, the movement of the pound/dollar pair last Friday was pretty good. Unfortunately, we failed to catch the morning movement, as the first sell signal was formed with a delay. The 1.3509 level is Friday's high, so it simply wasn't on the chart on Friday yet. Consequently, the first signal was to overcome the level of 1.3470. Novice traders should have opened short positions at this point. This signal did not turn out to be false, but the price dropped to the level of 1.3416, from which it rebounded, having already formed a buy signal. Short positions should have been closed in profits of about 25 points and long positions had to be opened immediately. The long position did not bring profit to the newcomers, as after 30 points of the upward movement, the pair returned to the level of 1.3416. Stop Loss should have been set at breakeven in 20 points, so the deal was closed at it. Nevertheless, another rebound followed from the level of 1.3416, which should have been worked out again with a long position. And this time the price reached the closest level of 1.3470, from which it bounced twice. Consequently, long positions should have been closed (profit - 28 points) and one could even try to play a fall, since a new sell signal was immediately generated. However, it was formed quite late, so it could no longer be worked out. In any case, it also turned out to be profitable. Newbies could have earned at least 53 points on Friday.

At this time, on the 30-minute timeframe, the upward trend still persists, but it itself was weak, and now there is still no confidence that the trend line will remain relevant. Therefore, we would not draw any conclusions on this TF. The important levels on the 5-minute timeframe are 1.3352, 1.3396, 1.3416, 1.3470, 1.3509 - 1.3517. We recommend trading on them on Monday. The price can bounce off them or overcome them. As before, we set Take Profit at a distance of 40-50 points. At 5M TF, you can use all the nearest levels as targets, but then you need to take profit, taking into account the strength of the movement. When passing 20 points in the right direction, we recommend setting Stop Loss to breakeven. No major reports will be released on 22 November in the UK. The news calendar is completely empty. Thus, volatility may be low.

Interesting? Write a comment below.
 How to trade GBP/USD on November 22? Simple tips for beginners. A great day for novice traders
Forward 
Backward 