How to trade GBP/USD on November 8? Simple tips for beginners. The extractive week is over, what's next for us? 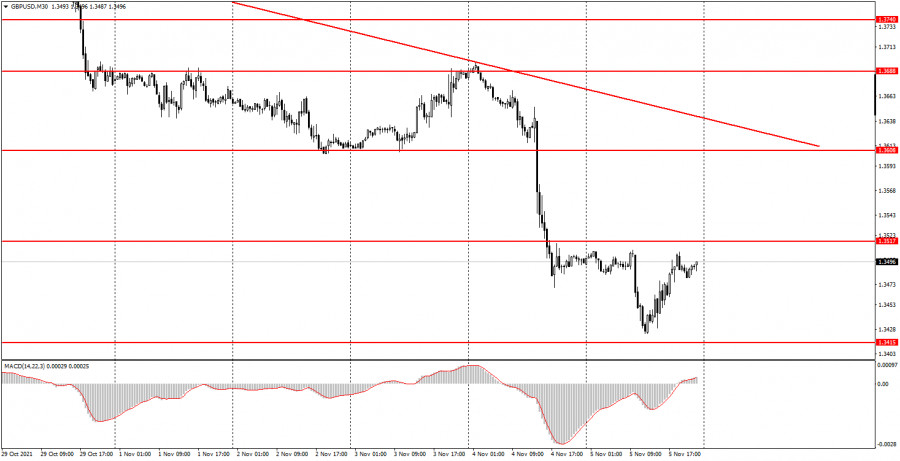 The GBP/USD pair was trading much more calmly on the 30-minute timeframe on Friday, November 5. It seems that after the quotes collapse on Thursday, the market simply ran out of gasoline for another downward spurt. We say "dash down" because the macroeconomic statistics on Friday should have provoked a new strengthening of the US currency. However, the dollar has been growing since the morning. At that time not a single important macroeconomic report was published either in the US or in the UK. However, the dollar was still rising. And data on the labor market and unemployment were published in America, at the US session, which turned out to be much stronger than traders' expectations, for some reason this already provoked the growth of the British currency. Thus, it can be assumed that the markets worked out the US statistics in advance, and when they were published, they began to take the profit on the short positions of the pair. The downward trend on the 30-minute timeframe is maintained thanks to the trend line, but there were no sell signals on Friday. 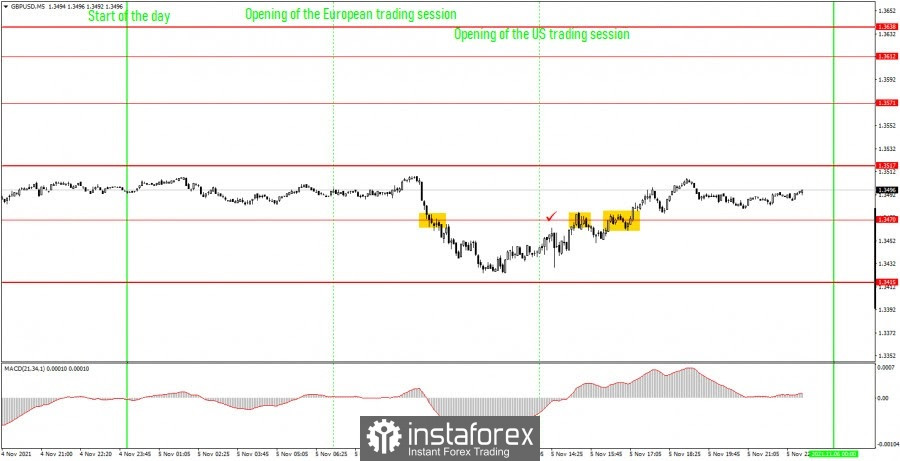 On the 5-minute timeframe, the technical picture on Friday was quite eloquent. In the first half of the day - a fall, in the second - an increase. Unfortunately, the quotes of the pair formed signals only around one level - 1.3470 during the day, and only approached others. Let's take a look at the trading signals and see how the pair should have been traded. The first sell signal was formed with some delay when the price settled below the level of 1.3470. After that, the price managed to go down 30 points, which was enough to place a Stop Loss order at breakeven. It was on this order that the deal was to be closed. However, novice traders could also close the deal manually before the publication of US statistics. This moment remained at the discretion of the traders themselves. Then another sell signal was formed near the level of 1.3470, but it, as in the case of the euro currency, should not have been worked out, since the US statistics were in favor of the dollar, and instead an upward movement began. But the next buy signal could be worked out, and it brought a small profit to traders. Only about 10 points. Therefore, it was not possible to earn much on Friday, but a small profit is better than any loss.

At this time, the downward trend continues on the 30-minute timeframe. Thus, at this time, we can consider the sell signals from the MACD indicator. However, now we need to wait for the indicator to turn down, since we are considering only sell signals. And this signal shouldn't form too high. The important levels on the 5-minute timeframe are 1.3415, 1.3470, 1.3517, 1.3571, 1.3612. We recommend trading on them on Monday. The price can bounce off them or overcome them. As before, we set Take Profit at a distance of 40-50 points. At the 5M TF, you can use all the nearest levels as targets, but then you need to take profit, taking into account the strength of the movement. When passing 20 points in the right direction, we recommend setting Stop Loss to breakeven. On November 8, novice traders will have nothing to pay attention to, since neither the UK nor the US will publish a single important report.

Interesting? Write a comment below.
 How to trade GBP/USD on November 8? Simple tips for beginners. The extractive week is over, what's next for us?
Forward 
Backward 