Overview of the EUR/USD pair. November 12. Inflation in the US may force the Fed to move faster with the tightening of monetary

The EUR/USD currency pair continued its downward movement on Thursday, which was started the day before. If we study the period of the last three weeks, it becomes clear: the dollar has shown tangible growth three times and each time after some serious macroeconomic or fundamental event. The first time was the ECB meeting, the second time was the Fed meeting, and the third time was the US inflation report. Since all three of these events turned out to be in favor of the US currency, it is not surprising that the US dollar is currently growing again. However, there are still doubts about his further ability to grow. At this time, the pair moves as follows: it waits for an important event and falls, after which it can stand in one place for several days, adjust sluggishly or slowly decline with minimal volatility. If you look at the daily timeframe, where each candle is visible, then we can conclude that the entire downward movement from the last local maximum (May 25 - 1.2260) occurred, by and large, in a dozen trading days. The rest of the time, the pair showed volatility of 40-50 points per day, trading in different directions or with a minimal downward bias. Thus, although there is a trend now, a downward trend is present, the movement itself remains as uncomfortable and strange as possible. There is a feeling that traders do not want to buy the dollar. However, at the same time, they are forced to do so by macroeconomic statistics and the "foundation". Also in favor of this option is the constant consolidation of the price above the moving average, after which the upward movement does not begin. Thus, we advise traders to use either minimum TF or maximum TF in trading.

James Bullard hints at the earlier completion of the QE program.

American inflation rose to 6.2% y/y in October and this is a very close phenomenon to it. Of course, now many economies of the world are experiencing problems, especially with inflation, but the States, which still have the largest economy in the world, somehow affect all other countries. Thus, it is impossible not to attach importance to inflation in America if you do not live in another country. In the modern world, all states are tied to each other. It is not for nothing that the Fed fears the collapse of Chinese construction companies, which have accumulated loans and are now on the verge of bankruptcy since the volume of construction has long exceeded the volume of demand even in China. Because if a couple of Chinese companies collapse, it will entail a whole wave of bankruptcies of other companies, which will plunge the whole world into the "crisis of 2008". And now this is especially true, when not only private companies have accumulated debts, but the states themselves are drowning in them. Thus, the higher the inflation, the worse. The more difficult it will be to stop it in the future. Moreover, the Fed and the US Congress will have to take emergency measures. Joe Biden has already stated that he sets a goal for the government to curb inflation, as it hurts the pockets of ordinary Americans. But Jerome Powell and Janet Yellen persistently do not attach importance to such a strong price increase. Most likely, they understand everything perfectly. However, they do not want to provoke panic in the markets. Therefore, they continue to say that high inflation is a "temporary phenomenon" and price growth will begin to slow down next year. But the chairman of the St. Louis Fed, James Bullard, who is famous for his tough and honest statements, said that next year he expects two rate hikes, and the regulator may complete the quantitative stimulus program not in July-August, but in April. Forcing deadlines is exactly what is needed to stop the uncontrolled rise in prices and keep inflation under control (if it is still possible). "If inflation turns out to be more stable than we think, then we may probably need to take action a little earlier," Bullard said. 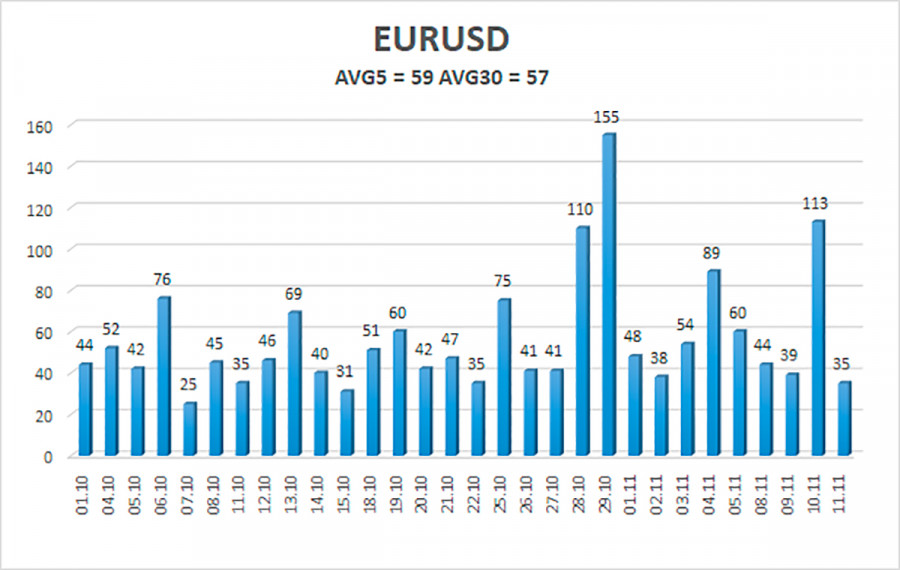 The volatility of the euro/dollar currency pair as of November 12 is 59 points and is characterized as "average". Thus, we expect the pair to move today between the levels of 1.1408 and 1.1526. The upward reversal of the Heiken Ashi indicator signals a round of upward correction.

The EUR/USD pair continues its downward movement. Thus, today it is necessary to stay in short positions with targets of 1.1414 and 1.1408 until the Heiken Ashi indicator turns upwards. Purchases of the pair should be considered if the price is fixed back above the moving average, with a target of 1.1597. It should be taken into account that reversals now occur very often and the price loves to falsely break through the moving lately.

Interesting? Write a comment below.
 Overview of the EUR/USD pair. November 12. Inflation in the US may force the Fed to move faster with the tightening of monetary
Forward 
Backward 