Overview of the EUR/USD pair. November 16. The dollar is growing by 6 points per day on average 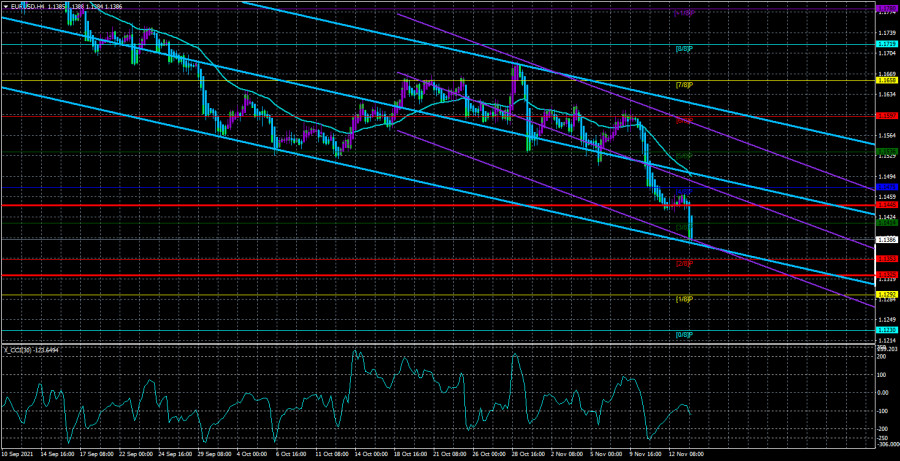 The EUR/USD currency pair maintained a downward trend on Monday. However, the movement that was shown has already become the hallmark of the euro in the last few months. Volatility was quite high. However, this is very rare for the euro/dollar pair. We remind traders that this is exactly how the pair has been moving in recent months: it spent 3-4 days in absolute flat or minimal volatility, then showed a good movement for 1 day. And it is due to this one day that the downward trend persists. However, it is simply unrealistic to trade the pair for the remaining 3-4 days. Despite this nature of the movement, both linear regression channels are still directed downward. Therefore, at this time, there is no reason to expect the formation of a new upward trend. Now, in principle, it is very difficult to understand how the market will continue to trade the pair. The US currency has had an advantage over the euro for almost 6 months. Just think about it: the last round of the downward movement lasts 6 months. During this time, the pair adjusted only three times. The maximum pullback to the top was 230 points. The whole downward movement takes 820 points. On the one hand, it seems to be a lot. However, if you divide 820 points into 132 trading days, it turns out that the pair decreased by an average of 6 points per day. And if at the same time the volatility itself was high, it would be a completely different conversation. With such volatility, you can at least actively trade and earn on small timeframes.

Christine Lagarde struck the market with the banality of her sayings.

Meanwhile, a new trading week has begun with a speech by Christine Lagarde in the European Parliament. The head of the ECB said what the markets have known or guessed for a very long time: "The slowdown in inflation in the European Union will be slower than previously expected due to disruptions in supply chains, as well as due to high energy prices." In principle, Jerome Powell and Janet Yellen, as well as other representatives of the Fed and the ECB, have repeatedly stated the same thing. Therefore, the markets did not react to this speech in any way. Christine Lagarde also noted that there is no clarity on the issue of supply disruptions now, so they can persist for as long as they want, but the ECB still expects that the problem will be solved within a few months. As for forecasts, the head of the ECB believes that inflation will slow down during 2022. A rather vague forecast.

Thus, on the first trading day of the week, the European currency did not receive any support. Considering that the pair is near its annual lows and does not even try to bounce up sharply and quickly, which is typical for the time when the pair is preparing for a correction or a new trend. Therefore, we believe that the decline in quotes will continue, even if only by inertia. Lagarde will be speaking almost every day this week. Her speeches are already scheduled for Tuesday and Wednesday. However, it is unlikely to expect any serious movements of the euro due to these events. As it was on Monday, Lagarde is unlikely to surprise the markets with anything. This week, in principle, there will not be very many important fundamental and macroeconomic events. Therefore, we are not waiting for the end of the downward trend on the 4-hour timeframe. This means that the pair can continue to gradually decline in the direction of the 13th level, where the 61.8% Fibonacci level is located on the daily timeframe. We have already said earlier that the US currency does not look much stronger than the European one now, but the latest macroeconomic statistics and the beginning of the curtailment of the QE program in the US still support the demand for the dollar. 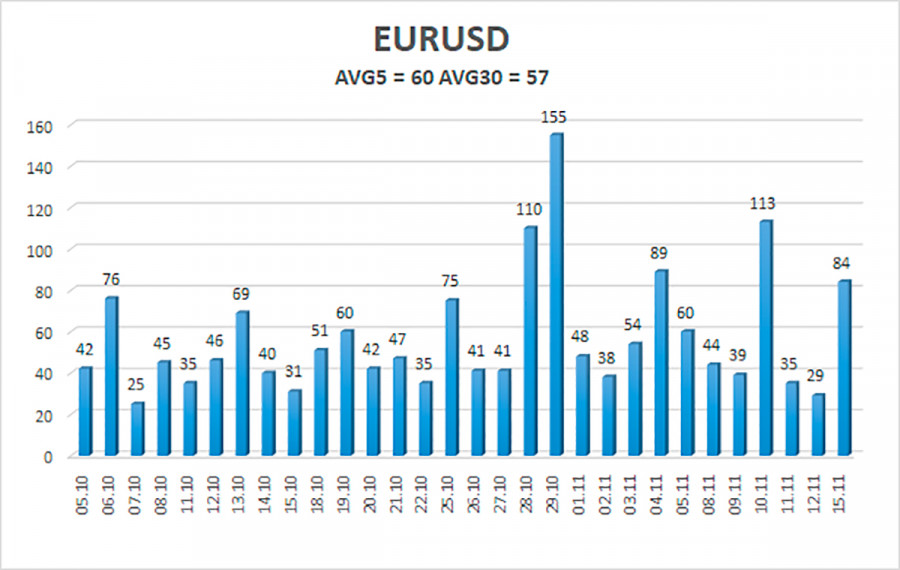 The volatility of the euro/dollar currency pair as of November 16 is 60 points and is characterized as "average". Thus, we expect the pair to move today between the levels of 1.1325 and 1.1445. A reversal of the Heiken Ashi indicator upwards will signal a new round of upward correction.

The EUR/USD pair continues its downward movement. Thus, today, it is necessary to stay in short positions with targets of 1.1353 and 1.1325 until the Heiken Ashi indicator turns upwards. Purchases of the pair should be considered if the price is fixed above the moving average, with targets of 1.1536 and 1.1597. It should be taken into account that reversals now occur very often, and volatility remains quite low.

Interesting? Write a comment below.
 Overview of the EUR/USD pair. November 16. The dollar is growing by 6 points per day on average
Forward 
Backward 