Overview of the EUR/USD pair. November 17. Christine Lagarde, what are you doing? 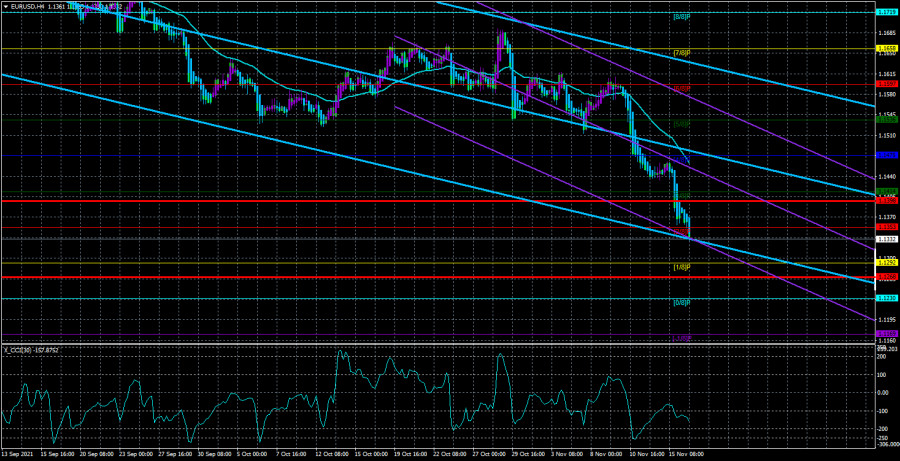 The EUR/USD currency pair continued to fall against the US currency on Monday and Tuesday. At the same time, the drop in quotes sharply intensified last Wednesday, when the markets learned about the highest inflation in the United States. With small interruptions, the euro currency has already plowed down 230 points and this movement was without a single rollback. Thus, it's time to talk about how long the dollar will grow and what are the reasons for this? Recall that for a long time we considered the entire downward movement of 2021 as a correction against the global upward trend of 2020. And given the fact that at this time the quotes have dropped by 50% of this trend, this movement may still be a correction. However, if the pair has been openly crawling down for most of the last few months, only assuring us that the movement is a correction, then in the last week the fall of the euro currency forces us to consider other possible options. On the one hand, there are no reasons to panic and to buy a pair now. Quotes are still below the moving average line, and both linear regression channels are directed downwards on the 4-hour TF. So what kind of purchases? On the other hand, this movement now looks powerful and convincing, and a couple of weeks ago, the pair stood in one place for four days, and one more or less actively moved. Moreover, in total over the past 5-6 months, the dollar has already grown by 900 points, which is quite a lot. It's time to talk about a correction against a correction - an upward movement of at least 300-400 points. And most importantly, the fundamental reasons for such a movement are not obvious. Let's try to disassemble them.

The head of the ECB said that it is not worth waiting for a rate hike next year.

If you try to look at the situation as far as possible from afar to see all the most global factors, then it seems that the current fall of the euro currency is quite logical. Let's pay attention to the fact that the Fed has already begun to curtail the quantitative stimulus program, and also hinted that it may raise rates once or twice over the next year. The Fed has embarked on the path of tightening monetary policy. At the same time, the ECB is not thinking about anything like that. No, the end of the PEPP program has also been talked about for quite a long time and this program has also begun to shrink, as Christine Lagarde informed the markets after the last ECB meeting. She said that the volume of asset purchases will decrease in the fourth quarter of 2021. This is exactly what means that the PEPP program is being curtailed. Moreover, the total size of the PEPP program is 1.85 trillion euros and it is designed for a total of two years. That is 24 months. Divide 1.85 trillion by 24 and get the figure 77 billion. That is, the maximum amount for which the ECB buys assets per month is 77 billion euros. In the States, it is $ 120 billion. However, 77 billion is the maximum amount. It is far from a fact that this is how much the ECB pours into the economy every month. And now the pace of asset purchases has also begun to decline. In general, quantitative stimulation in the European Union is weaker, although there is still an APP program - for 20 billion euros per month. That is, if less, then not much. What follows from this? It follows from this that the stimulus was more aggressive in the US, but now it is the States that are tightening their monetary policy more strongly and seriously than the EU. And Christine Lagarde also openly stated that it is not worth waiting for an increase in the rate (which is much lower in the EU than in the US) in 2021. Therefore, it is the dollar that has grounds for growth.

It should also take into account the fact that this growth can still end at any time. The fact is that the markets have known about the tightening of policy by the Fed and the rejection of it by the ECB for a long time. Even every new performance by Christine Lagarde or Jerome Powell does not surprise traders at all. Thus, all these changes can be taken into account in the current euro/dollar exchange rate for a long time. 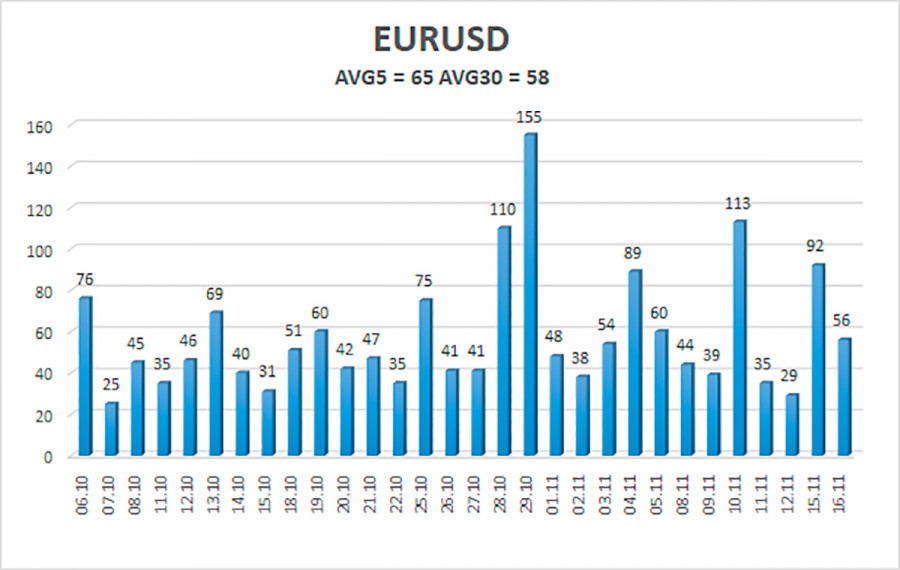 The volatility of the euro/dollar currency pair as of November 17 is 65 points and is characterized as "average". Thus, we expect the pair to move today between the levels of 1.1268 and 1.1398. The upward reversal of the Heiken Ashi indicator signals a round of upward correction.

The EUR/USD pair continues its downward movement. Thus, today, it is necessary to stay in short positions with targets of 1.1292 and 1.1268 until the Heiken Ashi indicator turns upwards. Purchases of the pair should be considered if the price is fixed above the moving average, with targets of 1.1536 and 1.1597.

Interesting? Write a comment below.
 Overview of the EUR/USD pair. November 17. Christine Lagarde, what are you doing?
Forward 
Backward 