Overview of the EUR/USD pair. November 18. The European Central Bank continues to finish off the euro 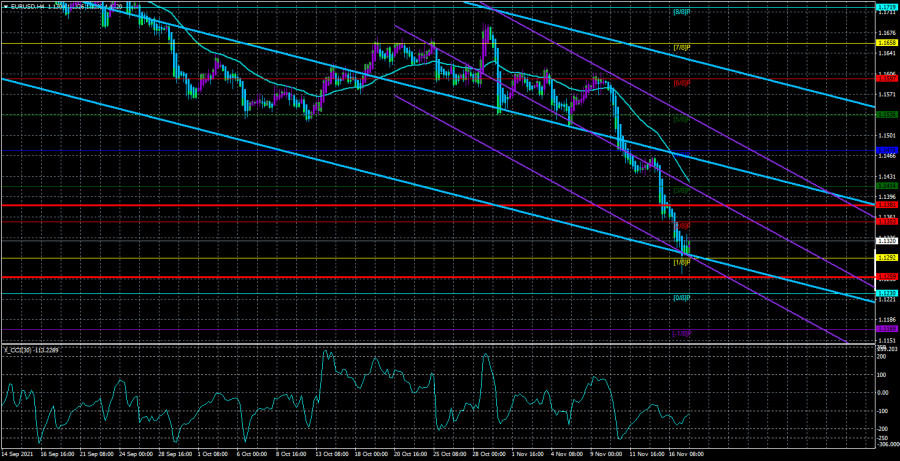 The EUR/USD currency pair continued to trade in a downward direction on Wednesday, but it began to adjust during the day. The fact is that the correction has been brewing for several days. And this is although a strong fall in the European currency has also been observed for only a few days. We are already so used to the fact that the euro/dollar pair shows an absolute flat or minimal volatility for 3-4 days out of 5 that several days in a row of trend movement cause strong surprise. During the week, the US dollar rose against the euro by 330 points (at the moment). And I must say that this movement can be interpreted in different ways. Let's be honest, over the past week, there have been important macroeconomic publications (for example, inflation in the US), as well as important fundamental events (for example, Christine Lagarde's speeches). However, weren't there any before? At a time when the pair stood in one place for four days a week. Thus, the current fall of the euro and the growth of the dollar look unexpected and even strange.

At the moment, there is one absolutely strong factor on the side of the US dollar – the market's belief that rates will be raised sooner than the Fed itself predicts. And also the belief that the QE program will be curtailed not in 8 months (at $ 15 billion per month), but much earlier. We are talking about tightening monetary policy. However, in this case, it turns out that when the Fed begins to move from words and reasoning to action, the markets will have nothing to work out: the dollar is already getting more expensive. In general, no matter how you look at it, the prospects of the US currency still look rather weak. Nevertheless, we note that at this time all indicators on the 4-hour TF are directed downwards, so it is simply impractical to consider purchases now. You should not try to guess the upward reversal and the end of the trend. It's better to follow the signals.

The head of the ECB finished off the euro for three days in a row.

In principle, the first half of the week was marked by the European Central Bank. To be more precise, under the sign of Christine Lagarde personally. In the first three days of the week, she managed to perform as many as four times. And each time her rhetoric was ultra-soft. Everything Lagarde wanted to tell the markets, she told them on Monday. And, by and large, the head of the ECB did not say anything new. She once again hinted at the weakness of the European economy, saying that key rates will not rise during 2022, thus cutting off any hopes of the market not tightening. Therefore, in the best case, next year we will be talking about curtailing the quantitative stimulus program, which in the EU is called PEPP. However, at the same time, the ECB may expand the APP program, which now amounts to only 20 billion euros per month. Anyway, if the Fed at least gives hopes for tightening, then the ECB does not even give hope. Based on this factor, the fall of the euro and the growth of the dollar may continue.

Separately, I would like to note that Christine Lagarde once again uttered a sacramental phrase about the "temporality" of high inflation. This phrase, like a mantra, is repeated from time to time by both Powell and Lagarde. At the same time, neither Lagarde nor Powell have recently said that inflation needs to be contained and have not shown readiness to use the necessary monetary tools to contain its further acceleration. Instead, other members of the Fed and the ECB are talking about it. This week, the chairman of the St. Louis Fed, James Bullard, announced the need for a faster curtailment of QE, and then ECB Vice President Luis de Guindos said that inflation could continue to rise and remain high for longer than expected if energy prices continue to rise and problems in supply chains are not resolved. Moreover, de Guindos believes that high inflation can lead to a fundamental increase in prices through wages, so the ECB needs to "keep its finger on the pulse" and be ready to intervene to repay the growth of the consumer price index. As you can see, even within the Fed and the ECB, many believe that it is time to counteract inflation, and not just wait for it to begin to decline. 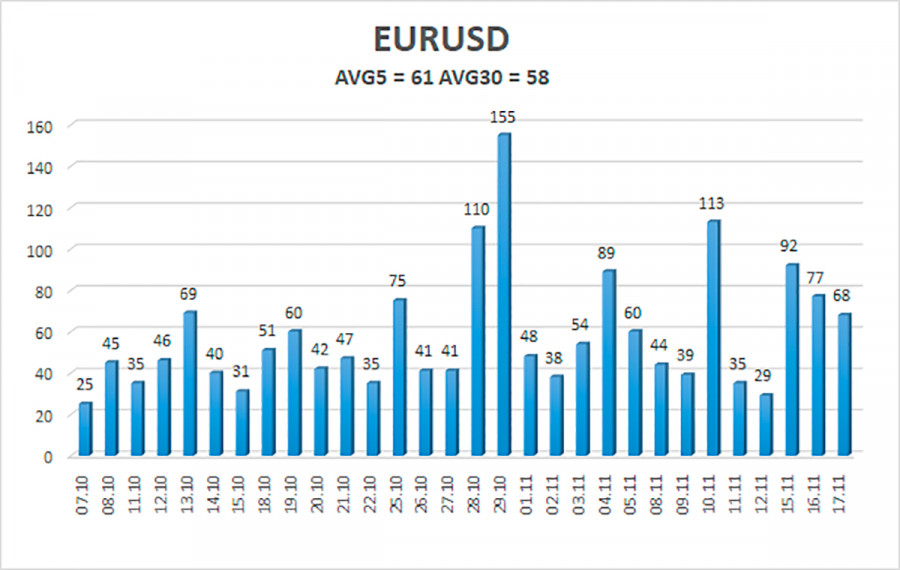 The volatility of the euro/dollar currency pair as of November 18 is 61 points and is characterized as "average". Thus, we expect the pair to move today between the levels of 1.1259 and 1.1381. The upward reversal of the Heiken Ashi indicator signals a round of upward correction.

The EUR/USD pair continues its downward movement. Thus, today, it is necessary to stay in short positions with targets of 1.1259 and 1.1230 until the Heiken Ashi indicator turns upwards. Purchases of the pair should be considered if the price is fixed above the moving average, with targets of 1.1475 and 1.1536.

Interesting? Write a comment below.
 Overview of the EUR/USD pair. November 18. The European Central Bank continues to finish off the euro
Forward 
Backward 