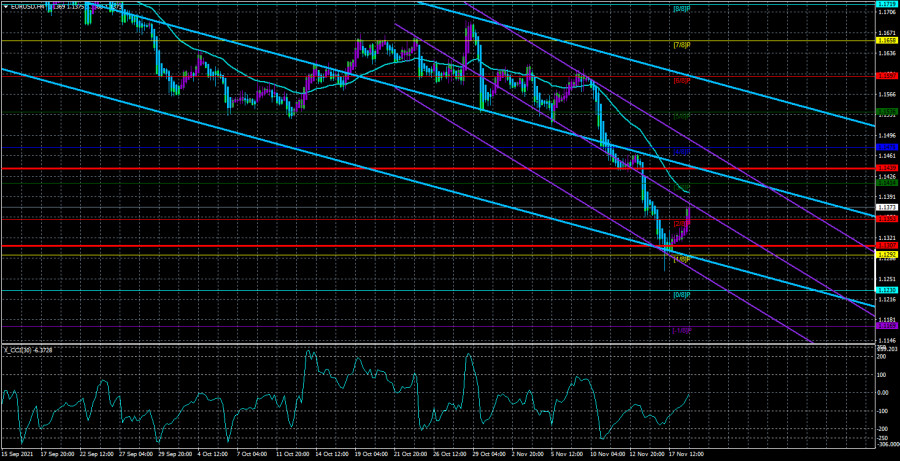 The EUR/USD currency pair continued to adjust to the moving average line on Thursday. We have already said in recent reviews that the fundamental background is now quite confusing for the euro/dollar pair since we have to take into account such a factor as market sentiment more than usual. In other words, market sentiment is one of the strongest factors. However, it does not always correlate with the fundamental or macroeconomic background. Thus, participants in the foreign exchange market can actively buy the dollar when there are no visible reasons and grounds for this. A simple example: a large multinational corporation enters the market with a request to buy a huge amount of dollars for trading operations. And this company does not pay attention to what the fundamental background is now and whether it is advisable to buy at this time. The same applies to the operations of central banks, which, through currency interventions, can influence the exchange rate of the national currency for their purposes. Thus, in the foreign exchange market, you can never be 100% sure of anything. Returning to the situation that has developed at this time, it should be said that over the past week the US dollar has strengthened strongly against the euro. However, it is difficult to say even now what caused such a sharp surge of emotions. The very fact that the dollar is getting more expensive for most of 2021 may have both technical and fundamental reasons. The first is the need for correction against the global upward trend of 2020. The second is the belief of the markets that the Fed, as one of the largest central banks in the world, will continue to tighten monetary policy, which will affect the world's largest economy. Nothing else can explain the growth of the US currency. However, we note that the markets have been waiting for the QE program to be curtailed since the summer, and now they are waiting for a rate hike. If this continues, the dollar will rise in price until next summer simply based on market expectations alone.

Meanwhile, the Fed is now involved in another very important process. President Joe Biden is now choosing one of two candidates to head the Fed for the next 4 years. Jerome Powell's term of office will expire in February next year, and since he is a Republican, there is a high probability that he will leave office. In America, it is customary to choose presidents and heads of the Fed for two terms. But since Donald Trump did not hold on to his post, and it was he who proposed Jerome Powell for this position, the current head of the Fed may resign after Trump. Most interestingly, Powell is not a bad chairman. Of course, there are claims against him too. In particular, Democrats believe that the current head of the Federal Reserve has failed to resolve all issues of corporate ethics, and also pays little attention to global climate change. However, do not forget that Powell led the Fed during the most severe financial crisis and did not let the economy collapse. In general, if you close your eyes to the little things, Powell deserves to have his contract extended. The second candidate is Lael Brainard, a member of the Fed board and the only Democrat on the board. Therefore, it is not necessary to guess for a long time why Brainard was honored to be the main candidate for the position of head of the Fed. It should also be noted that Biden has been unable to decide on the name he will propose to Congress and the Senate for quite a long time, but promised that he would announce it by the end of this week. From our point of view, this person will still be Lael Brainard. At the same time, many experts, including us, believe that with the change of the head of the Fed board, nothing will change in its monetary policy. Brainard also holds "dovish" views, and this is what the White House needs now. The rate will rise next year not because some "hawks" have gathered at the Fed, but because otherwise the US economy will overheat, and inflation will generate stagflation and get out of control. Thus, it does not matter at all who exactly the rates will increase. 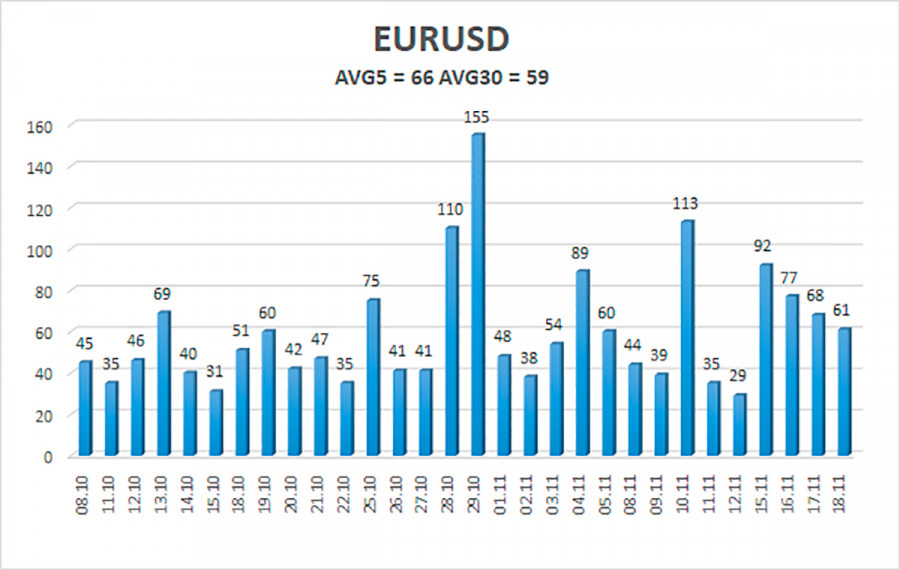 The volatility of the euro/dollar currency pair as of November 19 is 66 points and is characterized as "average". Thus, we expect the pair to move today between the levels of 1.1307 and 1.1439. The reversal of the Heiken Ashi indicator downwards signals the resumption of the downward movement.