Overview of the EUR/USD pair. November 23. Inflation in the EU: don't panic. The United States is again on the verge of a 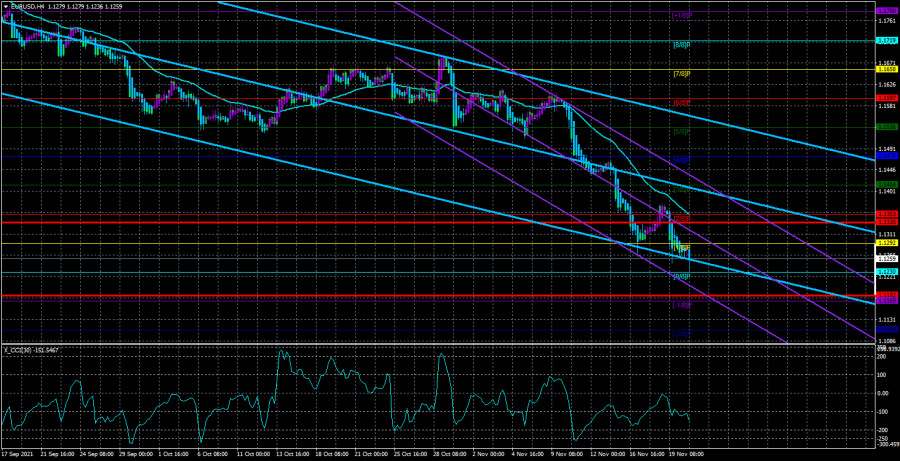 The EUR/USD currency pair moved quite calmly on Monday, but again with a downward bias. Our fears that the pair will continue to fall even with an empty fundamental and macroeconomic background have been justified. On the one hand, as we have already said in our recent articles, the growth of the dollar and the fall of the euro are now quite justified: Christine Lagarde has made it clear five times recently that one should not even hope for a rate hike next year, but the Fed, on the contrary, is following the path of gradual tightening of monetary policy. Thus, it is quite logical that in the last couple of weeks traders have been actively buying the dollar and selling the euro currency. On the other hand, this process should end sooner or later, because if the Fed is in the stage of tightening monetary policy for another year, and the ECB will wait all this time for inflation to slow down by itself, then the pair's exchange rate will come to parity. We believe that at the moment the market has already worked out these two factors quite well, but at the same time, the fall in quotes may continue due to inertia. When the market is gaining momentum, the movement can continue for quite a long time. Moreover, the pair continues to update the annual lows almost every day and is in no hurry to even adjust to the moving average line, which happens when there are at least attempts to complete the trend. Thus, we still suggest that traders keep in mind the idea that the US dollar has already risen quite a lot, but at the same time, there is not a single technical signal that would signal the beginning of an upward trend. Therefore, short positions should still be considered.

Christine Lagarde continues to put pressure on the euro.

Recently, especially last week, all attention has been focused on the ECB and Christine Lagarde. The fact is that we somehow figured out the policy of the Bank of England and the Fed, but the ECB has been a "dark horse" for a long time, from which it was unclear what to expect. Either the ECB will go toe-to-toe with the Fed and the BA and also start tightening, or not. However, last week the head of the ECB said that the regulator is not going to raise the key rate next year. Of course, much more was said, as usual. In particular, about inflation, about the PEPP and APP programs, but all this did not matter anymore. The main thing is that the ECB will not raise the rate. In order not to accidentally create a situation in which the markets misunderstood something, Lagarde repeated these statements at least three times. In addition, she said that the regulator should not react to the surge in inflation in recent months, as this will slow down the economic recovery. According to Lagarde, inflation will begin to decline next year, and the main reasons for its growth are high energy prices, strong deferred demand, as well as disruptions in supply chains. Thus, at this time, the markets already clearly understand what to expect from the ECB.

At the same time, the issue of raising the national debt limit has again arisen in the States. According to Janet Yellen, the country may again be unable to make the necessary payments as early as December 15. Therefore, Congress urgently needs to sit down at the negotiating table and again resolve this issue, which was already on the agenda just a month ago and was resolved only on October 15 in favor of raising the limit by 480 billion. This amount made it possible to postpone the default until December 15 (although the date was originally called December 3). Thus, Democrats and Republicans will again have to solve something on this problem. I wonder if this will be a temporary solution for a couple of months again, or will the borrowing limit be raised by several trillion this time? Or will its validity period be frozen for a couple of years? Anyway, the US government debt continues to grow and already exceeds 100% of GDP. And the fact that there is a need to increase the limit indicates its further growth. 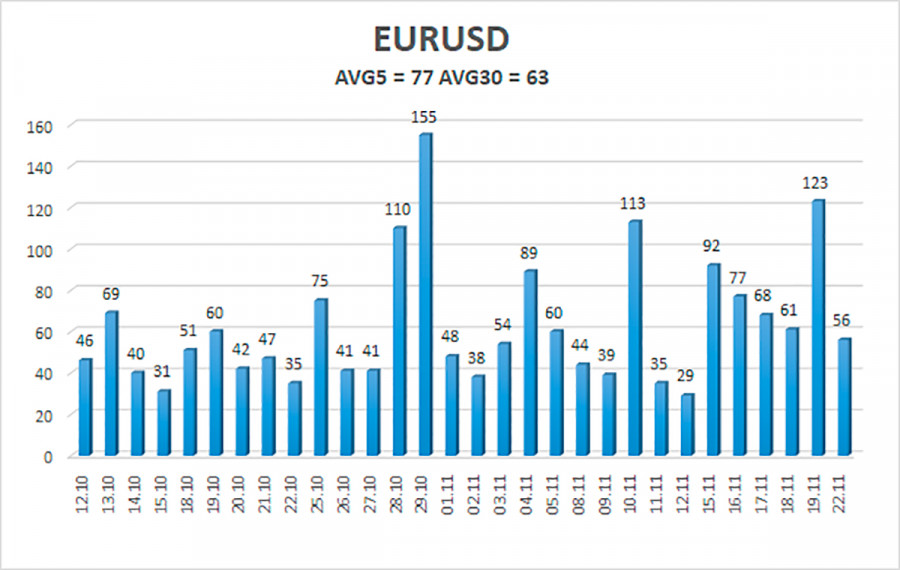 The volatility of the euro/dollar currency pair as of November 23 is 77 points and is characterized as "average". Thus, we expect the pair to move today between the levels of 1.1182 and 1.1335. A reversal of the Heiken Ashi indicator upwards will signal a new round of corrective movement.

The EUR/USD pair continues its downward movement. Thus, today, it is necessary to stay in short positions with targets of 1.1230 and 1.1182 until a new reversal of the Heiken Ashi indicator upwards. Purchases of the pair should be considered if the price is fixed above the moving average, with targets of 1.1414 and 1.1475.

Interesting? Write a comment below.
 Overview of the EUR/USD pair. November 23. Inflation in the EU: don't panic. The United States is again on the verge of a
Forward 
Backward 