Overview of the EUR/USD pair. November 24. The European economy may need new incentives 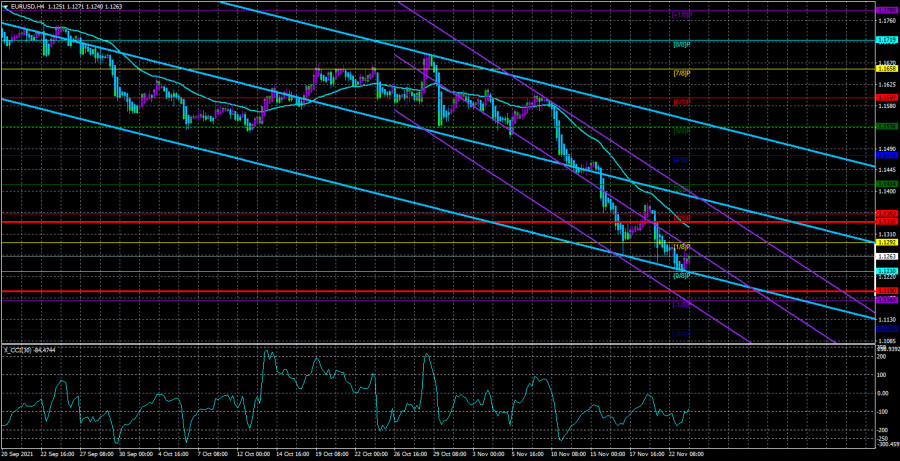 The EUR/USD currency pair continued its downward movement on Tuesday. Even if there is a slight increase in the pair during the day, it still does not affect the overall trend, which is now visible to the naked eye. Both linear regression channels are directed downward. The moving is directed downwards, and the price cannot even adjust to it. Thus, at this time, only the sale of the pair should be considered. Over the weekend, we were already thinking about whether the current fall in the European currency is justified. And even if not, we said that without technical signals and confirmations, any hypothesis should not be worked out. As you can see, now there is no confirmation that the downward trend may end. Moreover, we can say that the fundamental background is getting worse for the European currency day by day. In principle, there is now a surge in the incidence of "coronavirus" all over the world. Therefore, in the near future, the epidemiological situation may worsen everywhere and the States are no exception. However, several countries have already introduced quarantine in the European Union. And this means that the EU economy may start to slow down again. For those who have not forgotten, we remind you that the European economy has not shown strong growth in the last four quarters, unlike the American one. Its growth rate can be called low. And a new wave of the pandemic could deal it an additional blow. It should be noted right away that in Germany in recent days, an average of 50-60 thousand people a day have fallen ill, which is the highest level for the entire time of the pandemic. In Poland, the incidence levels are already approaching the highs of the second and third waves. The Netherlands sets anti-records for morbidity every day, and Austria has already announced a nationwide "lockdown". Thus, soon the entire European Union may start setting records for morbidity again, although at least 50% of the population has long received both vaccinations. It is this factor that can put pressure on the European currency in the future.

Christine Lagarde and "coronavirus" are equal to the complete collapse of the euro currency.

In the last one and a half to two years, the European currency has felt just fine. Even for most of 2021, despite the fall, it felt great. However, the last two months can be said to have turned everything upside down. Quite unexpectedly, a new wave of the pandemic began for many, the European Central Bank did not support its colleagues from the BA and the Fed and did not hint at raising the key rate and any other tightening of monetary policy, and Christine Lagarde began to pour "dovish" comments in different directions. In addition, in the States, the Fed began curtailing the quantitative stimulus program, which gave an additional boost to the US dollar, which was already strengthening without it. And although we consider the reaction that the market has shown in recent months sufficient, the fall of the euro/dollar pair may continue simply by inertia. Recall that Christine Lagarde also takes an ultra-soft position on the issue of inflation, which, although lower in the European Union than in America, is also growing. In this matter, it should also be recalled that official inflation is now something like the "average value for the chamber." Five patients are dying, five have recovered, and on average, all are in normal condition. Also about inflation, both in the European Union and in the United States. Its official value is 4-6%, in fact, in many sectors of the economy, a price increase of more than 15% is recorded. Some types of raw materials, gasoline, electricity, gas, real estate, many goods, restaurants, cafes have recently risen in price by more than 15%. But this is, in fact, the same inflation. Thus, everything and everywhere is growing in value after central banks around the world have printed trillions of dollars, euros, and other currencies. Therefore, for many investors, businesses, and ordinary workers, inflation is a serious problem at this time. But the heads of central banks, in particular the ECB, believe that this is a temporary phenomenon and do not take any action on this. And it is worth noting that the ECB cannot do anything now, since tightening monetary policy will lead to an even greater slowdown in the economy, which may be difficult in the next few months. 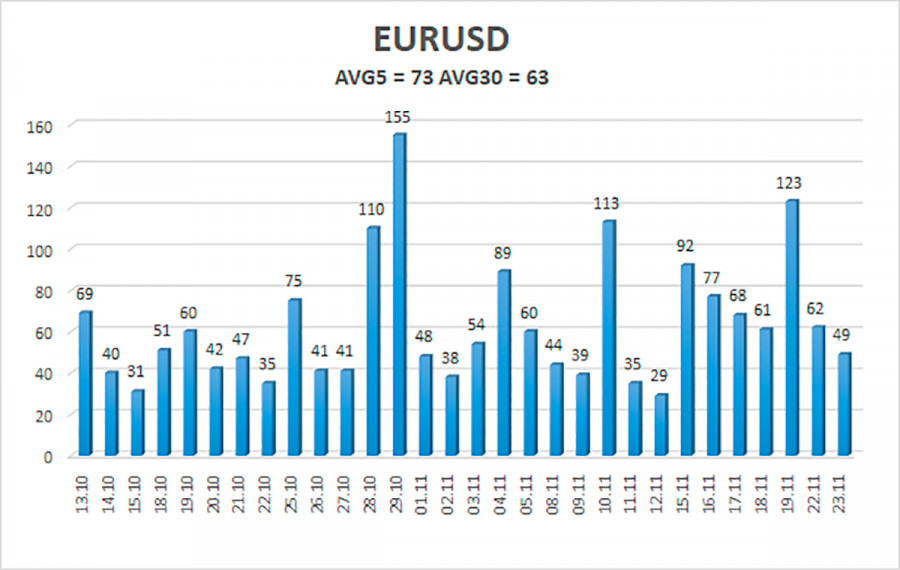 The volatility of the euro/dollar currency pair as of November 24 is 73 points and is characterized as "average". Thus, we expect the pair to move today between the levels of 1.1190 and 1.1335. The reversal of the Heiken Ashi indicator downwards signals the resumption of the downward movement.

The EUR/USD pair is trying to start a new round of correction. Thus, today we should consider new sell orders with targets of 1.1230 and 1.1190 after a new reversal of the Heiken Ashi indicator down. Purchases of the pair should be considered if the price is fixed above the moving average, with targets of 1.1414 and 1.1475.