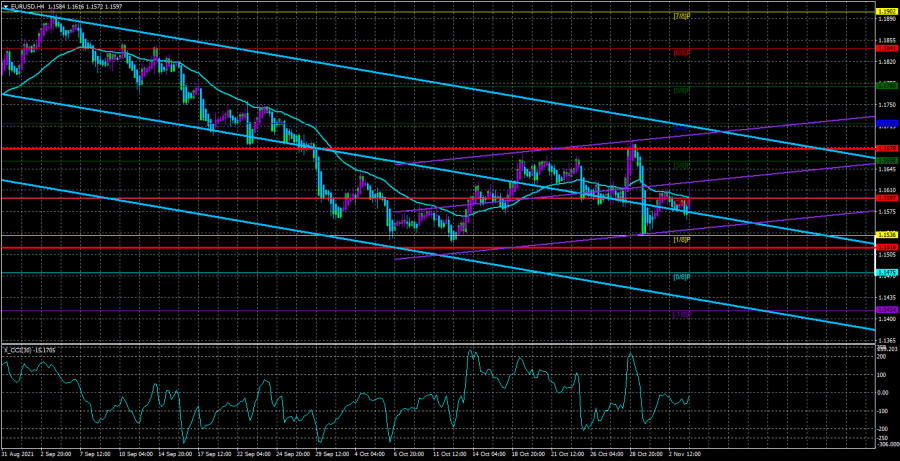 The EUR/USD currency pair continued a weak downward movement for most of the day on Wednesday. Although "continued" is not quite true. It would be more correct to say "continued to trade in a limited range." It should be noted right away that in this article, we will not consider the results of the Fed meeting, as well as all the movements of the pair that occurred after that. At least because in such cases, the markets often trade on nerves or emotions, and the very next day they try to correct their mistakes and return everything to normal. There are also reverse situations when there is no reaction at all, but the next day traders belatedly begin to work out the data that was received the day before. In any case, during the publication of the results of the Fed meeting and Jerome Powell's speech at the conference, we do not recommend trading the pair. This is too dangerous since it is possible to increase the movement, sharp reversals are possible, which cannot be predicted in advance, and technical analysis does not always have time to react to them. Thus, we will consider the events that occurred before the announcement of the results of the Fed meeting, in the quiet part of the day. And in the quiet part of the day, everything was, oddly enough, calm. And this is although, before the evening events, there were several important reports in both the European Union and the States, as well as a speech by ECB President Christine Lagarde. The markets had something to react to, but they did not consider it necessary to do so. Moreover, it should be noted that the euro/dollar and pound/dollar pairs moved differently during the day, and their movements were very difficult to associate with the macroeconomic and fundamental background that was present on Wednesday.

Christine Lagarde "reassured": rates will not be raised next year.

And the fundamental background for three-quarters of Wednesday was quite interesting. By and large, the most important event of this part of the day was the performance of Christine Lagarde. Unlike a lot of her other speeches, the head of the ECB did not repeat the phrases she had memorized and learned by heart by market participants but shared really important information. Namely, Christine Lagarde said that the current state of the EU economy and its prospects are unlikely to allow the central bank to raise key rates this year or next. According to the head of the ECB, three conditions for raising the rate have been formulated, and they will not be achieved next year with a 99% probability. "The forecast for inflation in the medium term remains restrained, so this indicator, as we expect, will begin to slow down next year. Thus, this condition (stable inflation of 2%) may not be achieved," Christine Lagarde said in Lisbon. The state of the EU economy and future inflation are still of great importance in the context of the ECB's monetary policy. As we can see, the European economy is recovering at a moderate pace (in the third quarter a little more than 2%) and so far there are no grounds for tightening monetary policy. The EU needs to at least complete the PEPP program in March next year and at the same time not inflate the APP program to the size of the PEPP program. In other words, the ECB will not become the central bank that will be the first to start raising rates. Recall that the Fed is going to raise the key rate at least once next year. At least, this is indicated by the "dot plot" chart, according to which already half of the members of the monetary committee support a rate increase in 2022. The same applies to the incentive program. PEPP volumes will decrease in the fourth quarter, but at the same time, as Lagarde herself said, the APP program will increase. Thus, it is still very difficult to calculate exactly how much the cash flow to the European economy is decreasing. While the US economy may start from November, the month is not counted for $ 15 billion every month. Thus, taking into account all the above information, at the moment, the growth of the dollar is slightly more likely than the growth of the euro. However, everything here depends on the growth rates of money supply in the US and the EU, which are very difficult to calculate now. 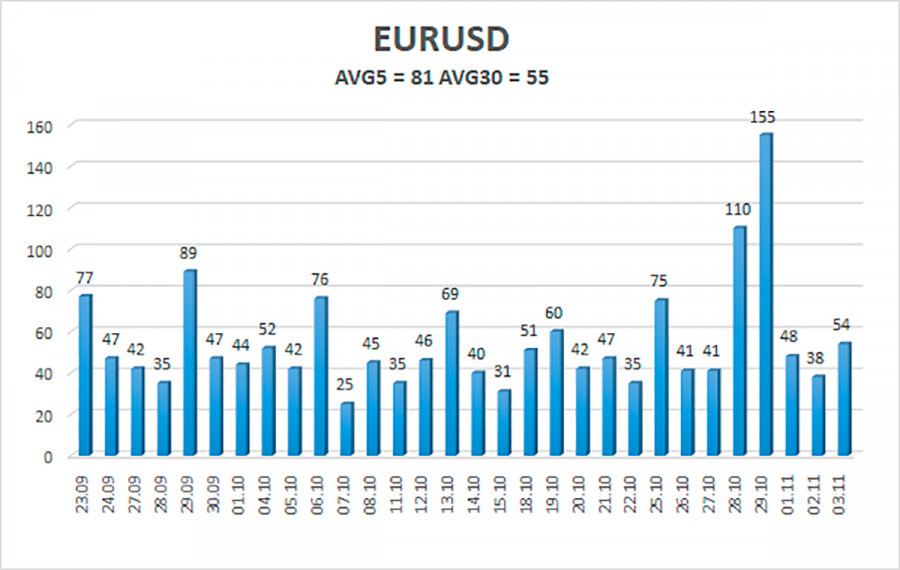 The volatility of the euro/dollar currency pair as of November 4 is 81 points and is characterized as "average". Thus, we expect the pair to move today between the levels of 1.1516 and 1.1678. The reversal of the Heiken Ashi indicator back down will signal the resumption of the downward movement.