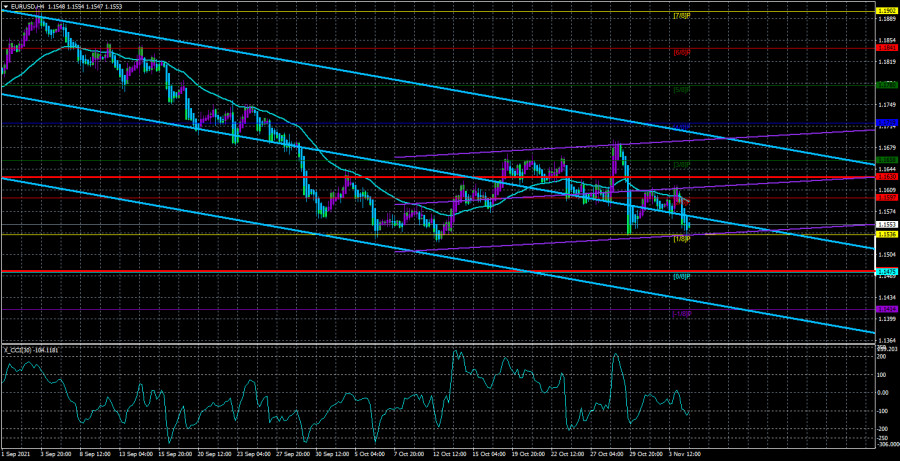 The EUR/USD currency pair fell by 70 points on Thursday. Then a recovery followed. However, the pair continued to work out the results of the Fed meeting over the next day. This is exactly what we talked about in yesterday's review. After such an important event as the Fed meeting, the market needs to be given at least a day to fully work out its results. We said that the Europeans and the British, for example, did not have the opportunity to work out the results of the FOMC, since the European trading session was already closed by that time. The same goes for Asians. Their trading session opened only at night. And since everyone looks at the Fed and its monetary policy one way or another, it was quite predictable that strong movements would continue a few hours after the results of the monetary committee meeting became known. However, it is still impossible to call today's movement "strong". Rather, it was of moderate strength. Recall that in recent months, the euro/ dollar pair usually passes 40-50 points per day. Therefore, 70 or more points already look like a strong movement. However, by and large, nothing extraordinary happened, and the euro/dollar pair remained within the same side-channel that it was in earlier. On the 4-hour TF, it is clear that even if the channel is not pronounced, nevertheless, the current movement cannot also be called "trending". All movements of the pair, starting from October 1, take place between the Murray levels "1/8" - 1.1536 and "3/8" - 1.1658. The pair has been in this range for more than a month. Thus, the current movement is still more suitable for the concept of "flat". Although the price continues to be located below the moving average line, the downward trend formally persists.

Jerome Powell has finally announced the curtailment of the QE program.

However, this does not change anything for the markets and the euro/dollar pair. Recall that the markets were waiting for this statement from the Fed back in September and were ready for the fact that they would have to wait for December to hear it. However, the Fed did not delay this time and announced that every month the economic stimulus program will decrease by $ 15 billion. However, Jerome Powell also stated that the pace of curtailment may accelerate, and may slow down. In other words, the Fed has again left itself a path of retreat, as it is not at all sure that the economy and the labor market will continue to recover at a good pace. To be more precise, the latest reports on GDP and NonFarm Payrolls say just the opposite. Therefore, if their growth rates continue to decline, the Fed may suspend the curtailment of QE. And this doubt from the US central bank probably prevented the dollar from showing more powerful growth. The Fed also lowered its forecast for economic growth for 2021, increased unemployment, and inflation. The Fed expects the situation to worsen and against this background, it still began to curtail QE. And the markets that have already taken into account the curtailment of QE a long time ago, it turns out, started doing it too early. Roughly speaking, after the FOMC meeting, it is impossible to draw an unambiguous conclusion that the course has now been taken to tighten monetary policy. Rather, it's like this: the course for tightening has been taken, but at any moment, it can be turned in the opposite direction. All the more interesting, because this Friday the next report on Nonfarm will be published in the States. If the value of this indicator is below forecasts for the third month in a row, this may be regarded by the markets as a signal of a possible suspension of QE curtailment in January or February. Moreover, Jerome Powell may resign in February, and it is unknown what course the new head of the Fed will take. The ADP report, which has already been released this week, showed a good value, but recall that ADP and NonFarm rarely coincide in their dynamics. The fact that the number of employees in the private sector has increased by 571 thousand does not mean that Nonfarm will grow by 500 thousand or more. Moreover, October was not the most successful month for the American economy. 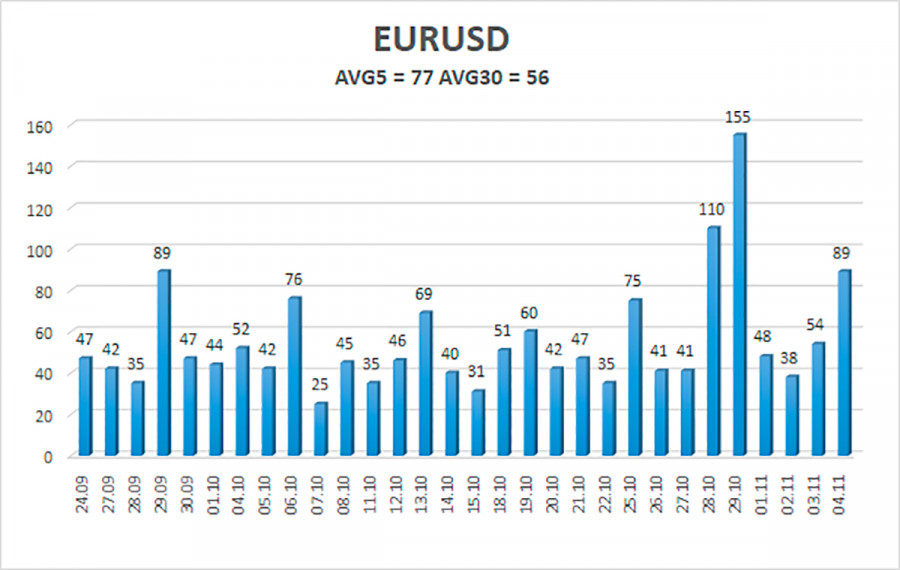 The volatility of the euro/dollar currency pair as of November 5 is 77 points and is characterized as "average". Thus, we expect the pair to move today between the levels of 1.1476 and 1.1630. A reversal of the Heiken Ashi indicator upwards will signal a round of corrective movement.