Overview of the GBP/USD pair. November 10. The UK continues to calculate losses from leaving the EU 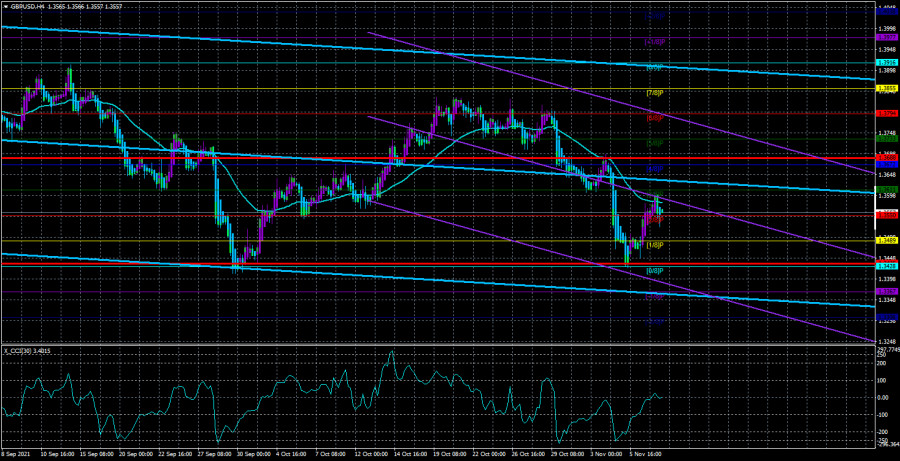 The GBP/USD currency pair on Tuesday tried to continue its recovery after the previous week's failure, however, bumping into a moving average on the way, bounced off it and began a downward correction. In principle, we are still considering the option of continuing the growth of the British currency as the main one, since we still believe that the fall of the pound last week was illogical. Thus, we are waiting for a recovery to the level of 1.3686. But it is still very difficult to guess what will happen next. The fact is that both linear regression channels are still directed downwards now. However, the downward movement itself over the past 8 months has been reluctant. Usually, everything goes according to the following scenario: the pair decreases by 500-600 points, and then it recovers by 400-500. Following this logic, a new round of upward movement has now begun, again by 400-500 points. To continue, it requires overcoming the moving average line. On the other hand, "profitability in the past does not guarantee profitability in the future." Thus, this time, the downward movement may intensify instead of a new round of upward movement being formed. What can help the dollar sharply continue its downward movement? From our point of view, there are no such factors now. The economic, political, and geopolitical situation in the UK remains very difficult, although perhaps many crises are not visible to the naked eye. On the other hand, the Bank of England almost raised the key rate in November. And many experts believe that he will do it next month. At the same time, what will happen to the QE program, which has not yet begun to collapse, is not yet clear. Let me remind you that raising the rate in the absence of a reduction in the QE program is like putting on the brake and gas at the same time.

The British are no longer happy with Brexit. Each of them will pay about $ 1,700.

A couple of weeks ago, we already wrote that more than half of the Britons who participated in the latest opinion polls expressed their dissatisfaction with the results of Brexit. According to research results, only about 20% are satisfied with the results of Brexit. However, the UK government continues to talk about a "bright future" for the whole country and each of its citizens individually, successfully (or unsuccessfully) trying to disguise the losses from Brexit under the losses from the coronavirus pandemic. As blasphemous as it may sound, Boris Johnson and his cabinet even benefit from a pandemic, because without it, the people and the opposition would clearly understand what Brexit is worth for their country. And since the results of government policy are directly related to the terms of this government's stay in power, it is simply advantageous for Boris Johnson to blame everything on the COVID pandemic. Meanwhile, many experts and the media have long estimated that the losses from the country's exit from the European Union will be at least twice as strong as from the pandemic. Of course, these calculations were made taking into account that the epidemic will no longer cause serious blows to the economy. According to various estimates, the country will miss 4% of GDP due to Brexit. But the Center for the Study of UK Trade Policy has estimated that the losses from Brexit will be 178 times higher than the benefits of independence. It was estimated that in the next 15 years, the country will suffer enormous losses, and every Briton will pay an average of $ 1,700 for the country's exit from the EU. It was also estimated that the benefits of Brexit will bring the country about 0.1-0.2% of GDP is about 3-7 pounds sterling for each Briton. Experts note that the two dozen trade agreements that Boris Johnson has concluded or will conclude with other countries of the world will have virtually no real benefit for London. And there is no trade agreement with the United States, as Johnson promised, and it is unknown when it will appear at all. Thus, so far, Brexit for the UK turns out to be a serious failure. 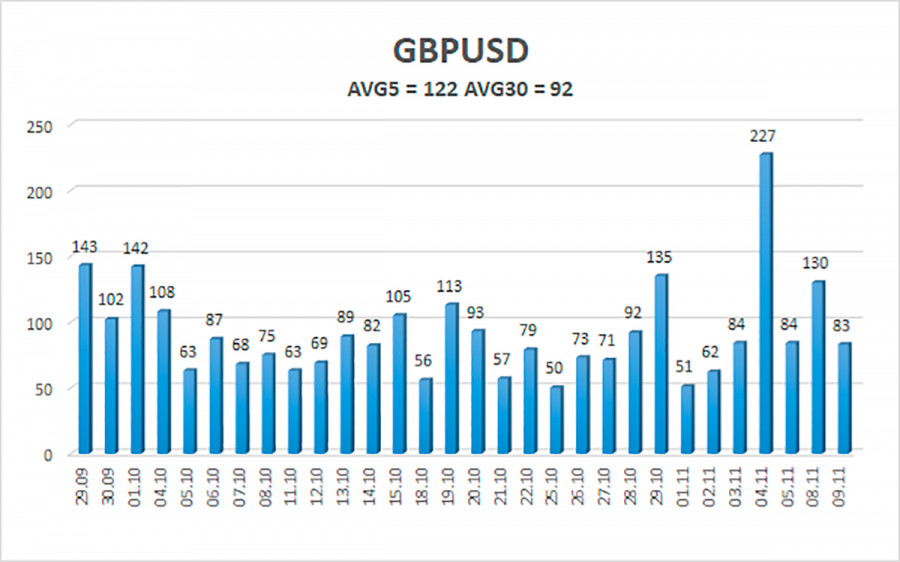 The average volatility of the GBP/USD pair is currently 122 points per day. For the pound/dollar pair, this value is "high". On Wednesday, November 10, we expect movement inside the channel, limited by the levels of 1.3435 and 1.3688. The reversal of the Heiken Ashi indicator downwards signals a possible resumption of the downward movement.

Interesting? Write a comment below.
 Overview of the GBP/USD pair. November 10. The UK continues to calculate losses from leaving the EU
Forward 
Backward 