Overview of the GBP/USD pair. November 11. The UK should be ready for a trade war with the European Union 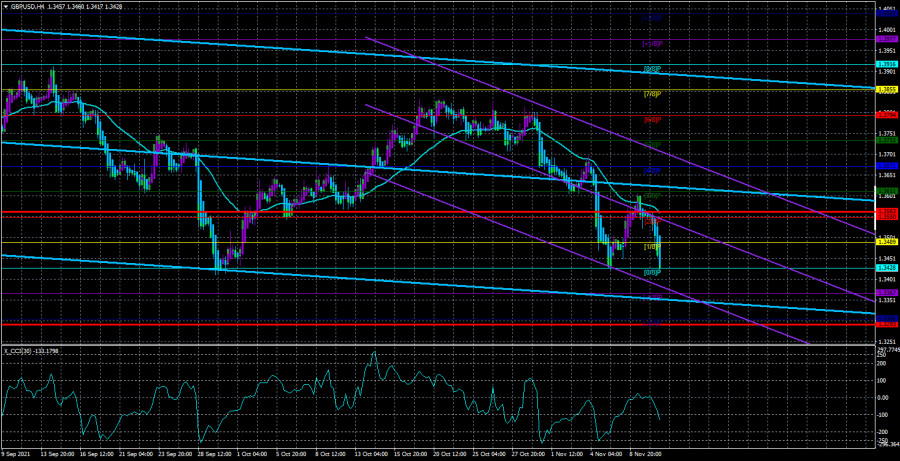 The GBP/USD currency pair continues to move more or less logically. At least from a technical point of view. Unlike the euro/dollar pair, the pound/dollar at least bounces off the moving average line, as happened yesterday. And after such bounces, the price shows at least some kind of downward movement. Therefore, technical signals are not the weakest now. Therefore, they can be worked out and earned on them. At the moment, the pound continues to be located near its annual lows near the Murray level of "0/8" - 1.3428. Moreover, yesterday's drop in the pair's quotes casts doubt on a very promising-looking option with a new round of upward movement by 400-500 points. Recall that on the 24-hour timeframe, the pair is constantly adjusted upwards, while these corrections practically coincide in size with the turns of the downward movement. The downward trend seems to be continuing now, but at the same time, it is not a trend. Until the 1.3428 level is overcome, the option with an upward movement remains quite attractive. But here it should be clearly understood what can support the US currency so that it continues its growth? The formulation of the question should be exactly like this since it was the dollar that strengthened in pair with the pound in the last 8 months. The pound does not need grounds now to start an upward trend, which at first will be a simple technical correction. From our point of view, there are still a few reasons for the dollar to grow. Of course, you can always find them if you want to. For example, the Fed has already started curtailing QE, but the Bank of England has not. On the other hand, BA may announce a rate hike as early as December, but the Fed is unlikely to announce it before the middle of next year. In general, the fundamental background can hardly be called unequivocally in favor of the dollar.

London may "run into" a trade war with the European Union.

If we recall all the events related to Brexit since 2016, one thing is clear – the UK itself wanted to leave the European Union. Now, 5 years after the referendum and almost a year after the completion of Brexit, it becomes clear that the "bright future" is still not in sight. London is desperately trying to push through the best terms of relations for itself in a dispute with Brussels but risks running into a new conflict. The fact is that London still requires a complete revision of the "Northern Ireland Protocol", which is part of the Brexit agreement. Therefore, this is a bilateral agreement and the consent of the European Union is required for this protocol to be changed. However, London is already openly threatening and blackmailing the EU, threatening to apply Article 16, which allows not to fulfill some of the terms of the agreement on Northern Ireland. However, the European Union is not going to indulge all the desires of the British. Representatives of the European Commission have already stated that in case of non-fulfillment of obligations by the British side, the European Union reserves the right to suspend the implementation of the entire Brexit agreement. In addition, the largest countries of the European Union require the European Commission to prepare an action plan in case of a trade war with Britain. Germany, France, the Netherlands, Italy, and Spain consider it necessary to restrict Britain's access to European energy, impose duties on exports from Britain, and in extreme cases suspend the entire trade deal. All this can happen if London at some point refuses to comply with the "Northern Ireland Protocol". We also recall that London periodically has disagreements on the "fish issue" with France. The European Union also said that London is "playing with fire and can seriously burn itself from these manipulations." How it will end in this dispute is still unclear, however, the situation is heating up. Thus, there is no reason for the dollar to grow, but there are reasons for the pound to fall. As long as the price is below the moving average, the downward prospects of the pair remain. 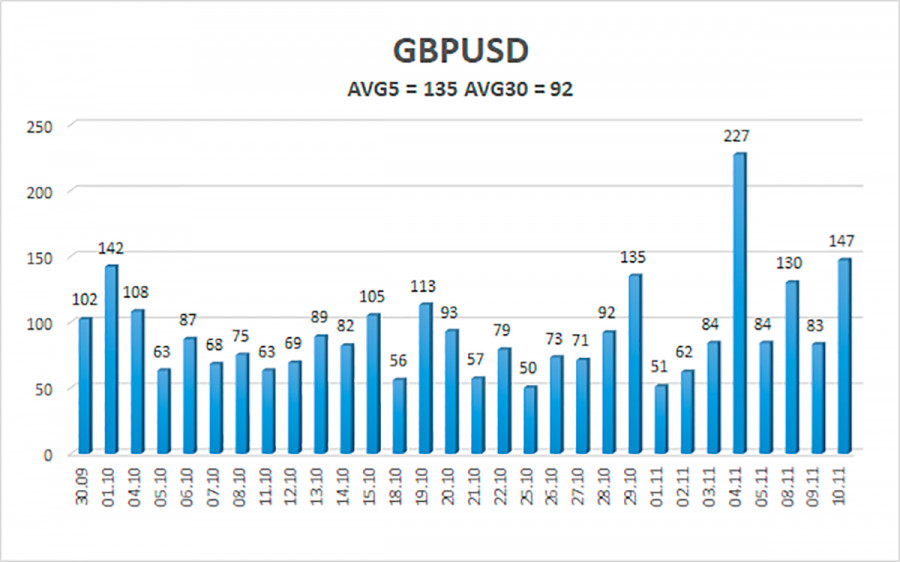 The average volatility of the GBP/USD pair is currently 135 points per day. For the pound/dollar pair, this value is "high". On Thursday, November 11, we expect movement inside the channel, limited by the levels of 1.3293 and 1.3563. A reversal of the Heiken Ashi indicator upwards will signal a new round of upward correction.

The GBP/USD pair continues to be below the moving average on the 4-hour timeframe, so the trend remains downward. Thus, at this time, it is necessary to remain in short positions with the targets of 1.3367 and 1.3306 levels until the Heiken Ashi indicator turns upwards. Buy orders can be considered if the price is fixed above the moving average line with targets of 1.3611 and 1.3672 and keep them open until the Heiken Ashi turns down.

Interesting? Write a comment below.
 Overview of the GBP/USD pair. November 11. The UK should be ready for a trade war with the European Union
Forward 
Backward 