Overview of the GBP/USD pair. November 12. Great Britain: a trade war with the European Union is just around the corner, 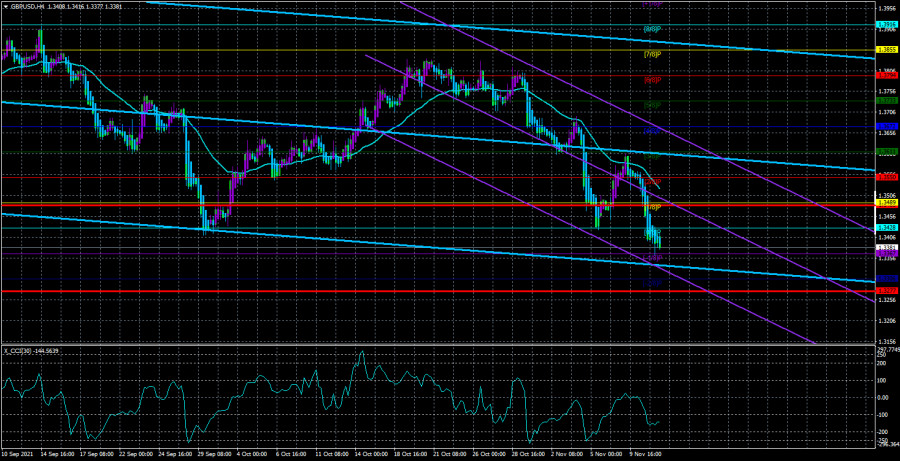 The GBP/USD currency pair was in a downward movement yesterday and the day before yesterday, which is not surprising, given the value of the consumer price index in the United States. Thus, the downward trend for the pound/dollar pair persists and it looks much more confident and beautiful than for the euro/dollar pair. The GBP/USD pair is not permanently fixed above the moving average, so as not to continue the upward movement later. The movements themselves are much more volatile than for the euro, especially in the last 6-7 trading days. Thus, it is the pound that now shows what movements need to be shown so that they want to trade. Both linear regression channels are directed downwards, as well as moving, so short positions should still be considered now. We have repeatedly assumed that in the second half of the year, the pound may begin to grow, with a long-term and strong. However, there are no grounds and signals for this now. The price is still below the moving average, so what purchases can we talk about now? Recall that any hypothesis, any assumption must be confirmed by specific trading signals. If there are none, then the assumption just remains an assumption. In the last few weeks, "macroeconomics" and "foundation" have been on the side of the dollar. The Fed meeting and reports on Nonfarm and inflation turned out to be unequivocally in favor of the US currency. The meeting of the Bank of England, from our point of view, was obliged to support the pound, but this did not happen and it is this moment that makes us doubt the long-term growth of the US currency. The Bank of England has made it clear that it may raise the key rate as early as next month. And that's the main thing. If this happens, the pound will not be able to show growth. And if it does not show, then once again in the context of the pound/dollar pair, you will have to ask a question about the logic of movements and decisions made by the market.

London is racing towards a trade war with the EU.

Yesterday, we already said that the European Union is now considering the possibility of creating a backup plan that will provide for the introduction of duties on British imports, as well as restrict Britain's access to the EU energy market. Surely, other methods of influencing the British, who in the last few years have continued to "swing their rights" and believe that the European Union should accept any of their opinions and support any of their requests, will also be considered. However, although they are famous for their liberal views in the European Union, they are not ready to be led by London all the time. The European Union is ready to discuss the problem of the "Northern Ireland Protocol", but is not ready to completely change it, because London wants it that way. The same applies to outright threats and blackmail of London regarding Article 16, which will allow it to refuse to comply with certain provisions and clauses of the Brexit agreement. Such an article does exist, but, as often happens, its content is rather vague and it can be interpreted as you like. However, the European Union is ready to go all the way this time. Italy, Spain, France, Germany, and the Netherlands have already expressed their displeasure with London's behavior and are preparing for a worsening of the conflict.

Meanwhile, Prime Minister Boris Johnson got into another scandal. This time he tried to change the rules because of his fellow party member, who got into a corruption scandal. We are talking about Owen Paterson, who lobbied for the interests of two companies and who was facing an investigation on corruption charges. Since the leader of the party and the prime minister of the country undertook to protect his fellow party member, he was also immediately accused of corruption and bribery. Representatives of the Labor Party say that this is not the first time that companies close to the Tories have a much better chance of receiving government orders. At this time, Johnson is being asked to apologize and admit his own mistake. And not only the opposition but also his own Conservative Party. Recall that this is not the first scandal involving Johnson. And criticism of the British Prime Minister pours with enviable regularity. So far, Boris Johnson is confidently following in the footsteps of Donald Trump. 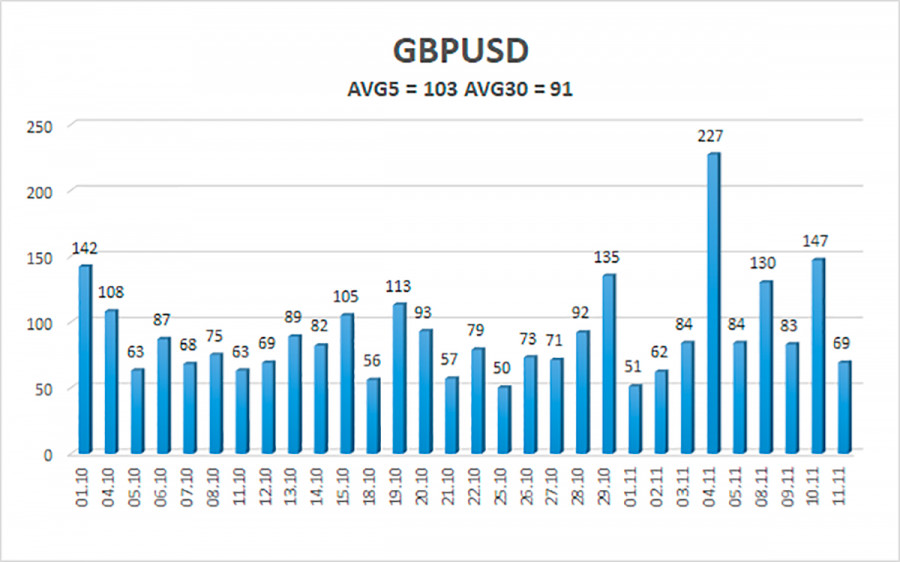 The average volatility of the GBP/USD pair is currently 103 points per day. For the pound/dollar pair, this value is "average". On Friday, November 12, we expect movement inside the channel, limited by the levels of 1.3277 and 1.3483. A reversal of the Heiken Ashi indicator upwards will signal a new round of upward correction.

The GBP/USD pair continues to be below the moving average on the 4-hour timeframe, so the trend remains downward. Thus, at this time, it is necessary to remain in short positions with the targets of 1.3306 and 1.3277 levels until the Heiken Ashi indicator turns upwards. Buy orders can be considered if the price is fixed above the moving average line with targets of 1.3550 and 1.3611 and keep them open until the Heiken Ashi turns down.

Interesting? Write a comment below.
 Overview of the GBP/USD pair. November 12. Great Britain: a trade war with the European Union is just around the corner
Forward 
Backward 