Overview of the GBP/USD pair. November 15. London threatened to use Article 16 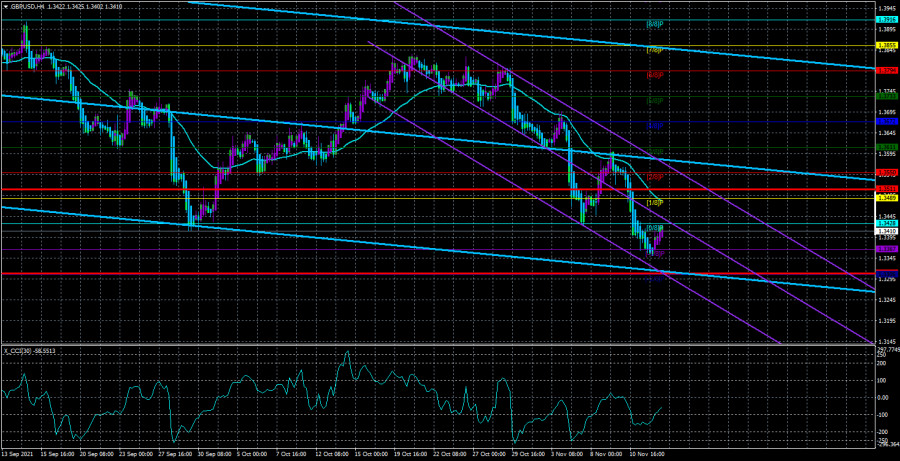 The GBP/USD currency pair started a weak upward correction on Friday but generally maintains a downward trend. Thus, after the completion of this small correction, the downward movement may resume. We have repeatedly said that the fundamental background is now as complex as possible, and the factor of great importance is which topics and news traders pay attention to and which are not. Because the pound continues to move not in the same way as the euro, although most of the resonant messages come just from overseas, which should provoke approximately the same movements in the two main pairs. It is also completely unclear whether the markets now take into account the political and geopolitical problems of the UK, which do not bode well for it? From our point of view, the pound deserves to fall more against the dollar than the euro. But in practice, everything is just the opposite, since the euro has adjusted against the global upward trend by more than 50%, and the pound - barely by 30%. We also remind you that on the older timeframe, the whole movement looks as correct as possible. And if this is a correction that has been going on for more than 8 months, then it is nearing its completion. And if so, then the pound may soon begin to grow against the dollar.

Britain understands the possible consequences of a trade war with the European Union.

Only the lazy are not talking about the confrontation between Britain and the European Union now. Many thought that with the completion of Brexit, the situation would improve and tensions between the Kingdom and the Bloc would become less. But in practice, everything turned out exactly the opposite. At the moment, the parties cannot agree on the already negotiated and signed "Northern Ireland protocol". The fact is that just a few months after this protocol started working at all, London decided that it was working badly and not as it should, so it called on the European Union to reconsider it. But the European Union does not believe that the protocol works somehow wrong. And it is not going to completely revise it, because Boris Johnson wanted to. And from that moment, Johnson-style games began. Attempts of threats, blackmail, and outright bluff began. The strongest card in Johnson's hands is Article 16 of the Brexit agreement, which allows you to abandon some points of the agreement to avoid serious consequences for the economy and the population that the special status of Northern Ireland may cause. However, it seems that there is also an "Article 16" in the trade deal. Therefore, the European Union simply responded to London by suspending the entire trade agreement, as well as imposing duties on imports from Britain, and restricting access to the European energy market. Therefore, a few days later, David Frost, the UK's Brexit minister, said that his country was not seeking to apply Article 16, but on the contrary, wanted to reach a compromise and an agreement with Brussels. Naturally, both sides limit themselves to general phrases when they give comments in the media. For example, the British side, represented by the same David Frost, notes that it is going to move into a more intensive phase of negotiations, which would allow both sides to find a compromise. However, Frost previously stated that all the proposed changes to the protocol by the European Union are too little to solve the problem. And Maros Sefcovic, vice-president of the European Commission, on the contrary, stated that the European Union offers Britain options for solving problems and is actively making concessions, but it's not enough for the British. Thus, so far there is no compromise. However, London and Brussels are no strangers to this state of affairs. All last year there was the same situation when the parties were negotiating a trade agreement after Brexit. However, potentially the absence of a resolution to this conflict could bring new economic problems, and mainly to the UK. Therefore, the pound remains in the risk zone. However, not in the near future. For several more months, the parties will still make efforts to resolve the disputed situation peacefully. 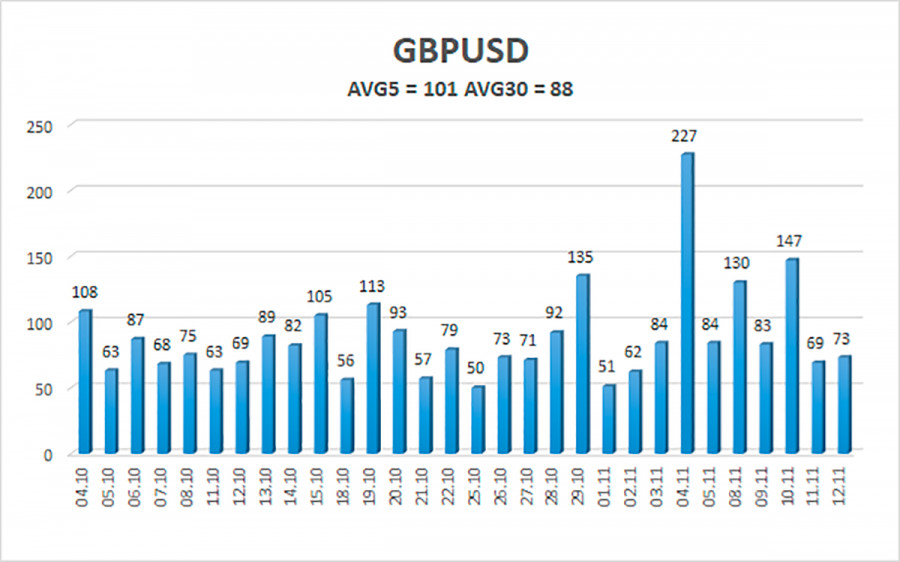 The average volatility of the GBP/USD pair is currently 101 points per day. For the pound/dollar pair, this value is "average". On Monday, November 15, we expect movement inside the channel, limited by the levels of 1.3309 and 1.3511. The reversal of the Heiken Ashi indicator downwards signals the resumption of the downward movement.

The GBP/USD pair continues to be below the moving average on the 4-hour timeframe, so the trend remains downward. Thus, at this time, new short positions with targets of 1.3367 and 1.3306 levels should be considered after the reversal of the Heiken Ashi indicator down. Buy orders can be considered if the price is fixed above the moving average line with targets of 1.3550 and 1.3611 and keep them open until the Heiken Ashi turns down.

Moving average line (settings 20.0, smoothed) - determines the short-term trend and the direction in which you should trade now.