Overview of the GBP/USD pair. November 16. Scotland continues to express its dissatisfaction with its dependence on London 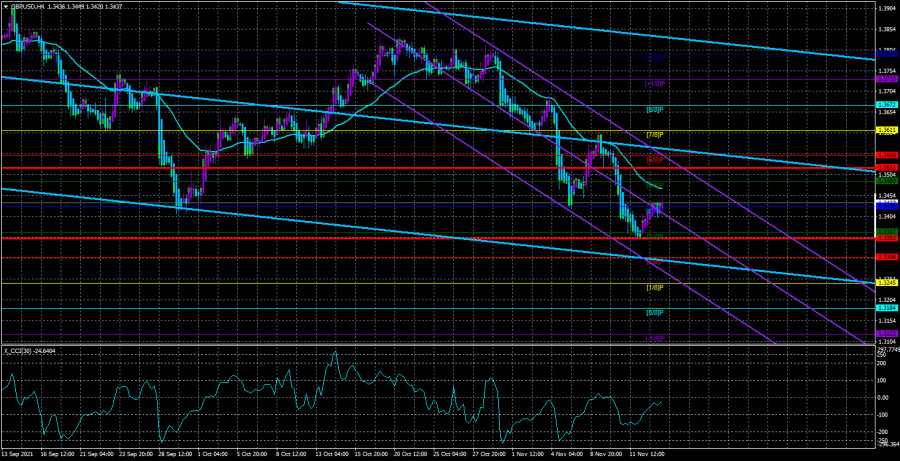 The GBP/USD currency pair also stood in one place almost all day on Monday. Thus, the trend of recent days has not changed – the pound/dollar pair continues to be inside the upward correction loop inside the downward trend. The pair is still located below the moving average line, so the downward movement can resume at any time. However, if the bulls find the strength to overcome the moving, the trend may begin to change slowly. The problem is that over the past six months, the US currency has already gotten used to slowly strengthening. Globally, the entire movement over the past 10 months is still a correction against the upward trend of 2020. The fundamental background at this time is so diverse and so ambiguous that it is even difficult to imagine what factors traders pay attention to when making trading decisions. As we said earlier, the situation in the UK is not the most positive right now. Even if we omit the fact that after Brexit, the state of the economy has become worse, not better, it is still Britain that remains the number one supplier of negative news. London still cannot agree with the European Union on the regime on the border with Northern Ireland. London is still at risk of getting its Brexit, as Scotland does not give up on the issue of holding an independence referendum. And according to Nicola Sturgeon, it should take place before the end of 2023. This was Sturgeon's official statement and promise at the last parliamentary elections, in which the Scottish National Party strengthened its position. Thus, if the referendum does not take place, it may lead to a loss of confidence in Sturgeon, which, of course, she will try her best to avoid.

Nicola Sturgeon pointed out the negative consequences of Brexit for Scots.

Over the past couple of days, the First Minister of Scotland has made speeches several times and shared quite interesting information, which only strengthens confidence that the SNP will continue to demand from London the right to hold an independence referendum. According to Sturgeon, Scotland is paying too high a fee for Brexit, which the Scots themselves did not vote for. There are not all the necessary products on the shelves in stores, and Scots no longer have the right to travel freely in Europe. The First Minister of Scotland also noted that her country does not have its place and voice at the climate conference, and the fate of her country is decided by people who are not related to her, hinting at Prime Minister Boris Johnson. In particular, Sturgeon mentioned the recent conflict between France and Britain on the "fish issue". According to her, the interests of Scotland were directly affected, as the French authorities detained the Scottish vessel. Sturgeon also accused the British government of allegedly being interested in its political views in fueling the conflict in Northern Ireland, and not paying it off. In general, all of Sturgeon's recent statements make it clear that her country is unhappy with the current state of things. After all, it should be understood that every single Scot may not feel the oppression of the British authorities and the injustice associated with the choice in the 2016 referendum. However, if the first party of the country, which has an overwhelming advantage in parliament, constantly broadcasts about unfair treatment from London, then one way or another this opinion begins to become popular. Scots are beginning to believe that they will live better outside the United Kingdom than in it. However, the UK itself also believed when it left the European Union. But the reality turned out to be somewhat different.

As a result, the pound may continue to fall against the dollar, but as we have already said, the fundamental background is now extremely ambiguous. This means that more attention should be paid to "technology". Now, more than ever, the advice "trade according to the trend" is relevant. Moreover, for any timeframe. 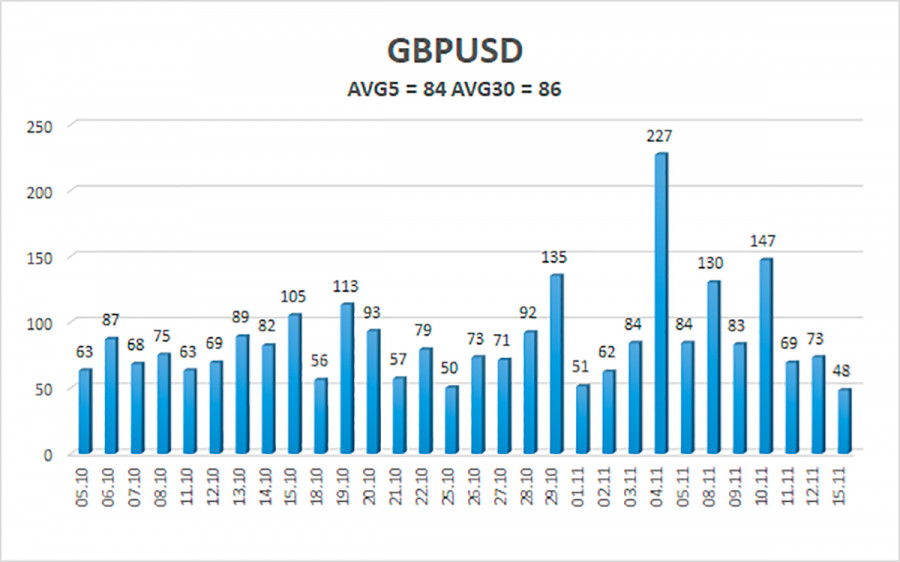 The average volatility of the GBP/USD pair is currently 84 points per day. For the pound/dollar pair, this value is "average". On Tuesday, November 16, we expect movement inside the channel, limited by the levels of 1.3352 and 1.3521. The reversal of the Heiken Ashi indicator downwards signals the resumption of the downward movement.

The GBP/USD pair continues to be below the moving average on the 4-hour timeframe, so the trend remains downward. Thus, at this time, new short positions with targets of 1.3367 and 1.3306 levels should be considered after the reversal of the Heiken Ashi indicator down. Buy orders can be considered if the price is fixed above the moving average line with targets of 1.3550 and 1.3611 and keep them open until the Heiken Ashi turns down.

Interesting? Write a comment below.
 Overview of the GBP/USD pair. November 16. Scotland continues to express its dissatisfaction with its dependence on London
Forward 
Backward 