Overview of the GBP/USD pair. November 17. Brexit and the "Northern Ireland Protocol". The conflict is not settled 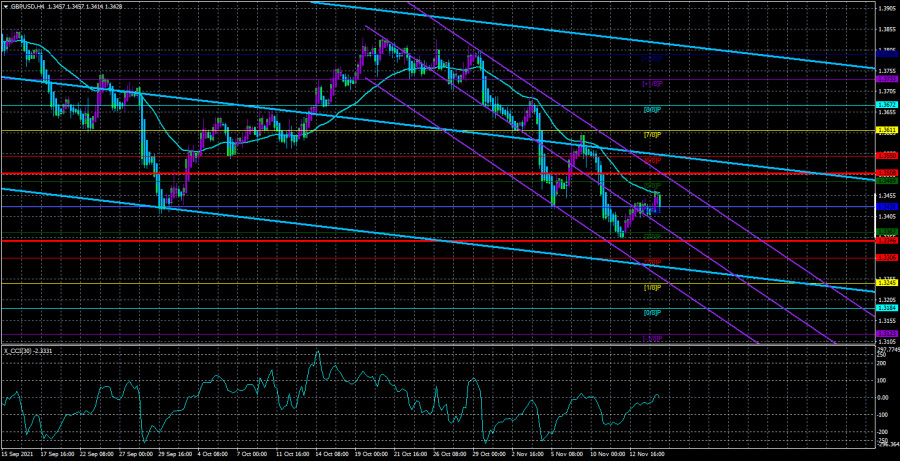 The GBP/USD currency pair continued to adjust for most of the day on Tuesday. The morning macroeconomic background from the UK provided support to the bulls, but at the same time, it cannot be said that the pound sterling has risen significantly on unemployment and wages data. Rather, on the contrary, movements in the pound have been quite weak in recent days, even weaker than in the euro currency, which in itself is very strange. Nevertheless, the British currency has also fallen in price very much in the last few weeks, but it has been showing at least some signs of life lately. The fact is that if the US currency is growing because of the more "hawkish" monetary policy of the Fed, then this factor should not be related to the British pound, since the Bank of England is also preparing to curtail QE, and even to raise the key rate, as the vote at the last meeting showed. Thus, the pound may become cheaper for other reasons, but not for monetary ones. Unfortunately, there are also enough geopolitical reasons, so the pound can safely decline on their basis. We have already said that the differences between the European Union and the UK are very difficult to resolve and potentially we already have a multi-month series called "negotiations on the Northern Ireland protocol". Now it is quite difficult to imagine how this "soap opera" can end. However, in addition, the threat of parting with Scotland is increasingly looming over the Kingdom. Yesterday, we wrote that the First Minister of Scotland Nicola Sturgeon has again raised the issue of the independence referendum, which should take place before the end of 2023. And this issue is unlikely to be hushed up somehow by the Scottish government since the referendum was an election promise of the Scottish National Party. Thus, if we take a long-term perspective, we would support the fall of the pound.

The UK makes a bad mine with a bad game.

However, we remind you once again that the number of factors that can potentially affect the mood of the markets and the exchange rate of the pound/dollar pair is huge. Therefore, it is extremely difficult to understand which of them are taken into account by the market, and which are not. For example, 10 Downing Street has made it clear, according to many British tabloids, that it does not seek to enact Article 16, which will allow it to refuse to fulfill some points of the Brexit agreement. According to representatives of the British government, the application of Article 16 will not solve the problems that the country has faced recently. Then it remains unclear why it was necessary to threaten to use this article at all if no one needs it? A question for David Frost. It is also reported that the leaders of the British government intend to sit down at the negotiating table with their European counterparts and resolve all issues diplomatically. Again, it is unclear why messages from Britain were constantly pouring in before that they were dissatisfied with concessions from the EU, dissatisfied with the refusal to completely revise the protocol. In general, even here the situation is confusing and can turn in any direction.

In the current situation, by the way, it would not be superfluous to pay attention once again to the 24-hour TF. It clearly shows that the downward movement of the last 8-10 months still looks like a correction. If the downward movement in the euro currency can transform into a trend, then it looks unlikely for the pound. Thus, we would say that from the current positions, a new round of growth of the pound is more likely, because this is how the pair moves in 2021: 600 points down – 500 up. We believe that the growth to the 37th level is quite realistic in the next two weeks. Moreover, this week in the States there is almost an empty calendar of macroeconomic events. However, FOMC members will be constantly speaking all week and, of course, the market's attention will be drawn to these events. Especially against the background of a huge amount of talk about high inflation in the United States. Therefore, if comments are constantly pouring in that it is necessary to curtail QE as soon as possible and raise rates, the dollar may continue to grow. 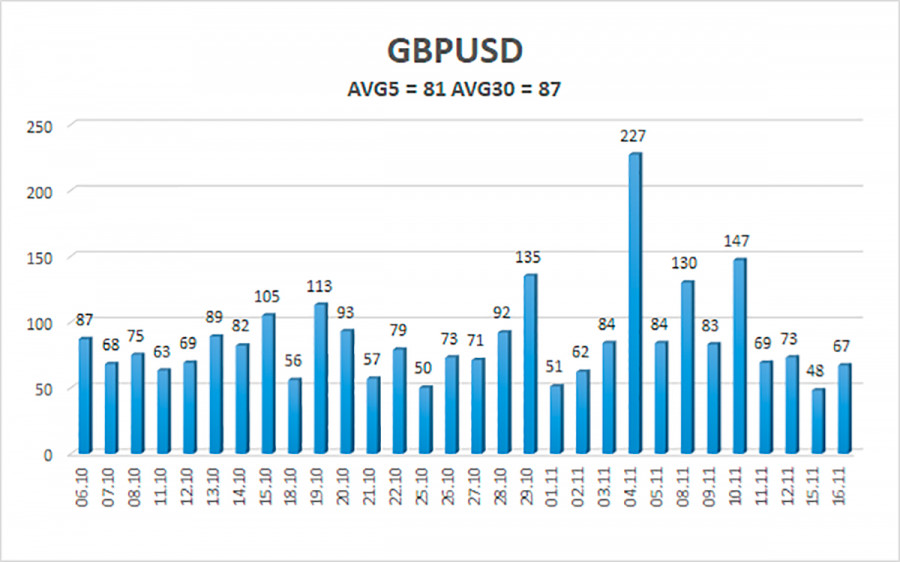 The average volatility of the GBP/USD pair is currently 81 points per day. For the pound/dollar pair, this value is "average". On Wednesday, November 17, we expect movement inside the channel, limited by the levels of 1.3346 and 1.3508. The reversal of the Heiken Ashi indicator downwards signals the resumption of the downward movement.

Interesting? Write a comment below.
 Overview of the GBP/USD pair. November 17. Brexit and the "Northern Ireland Protocol". The conflict is not settled
Forward 
Backward 