Overview of the GBP/USD pair. November 18. The UK urges the EU not to start a trade war 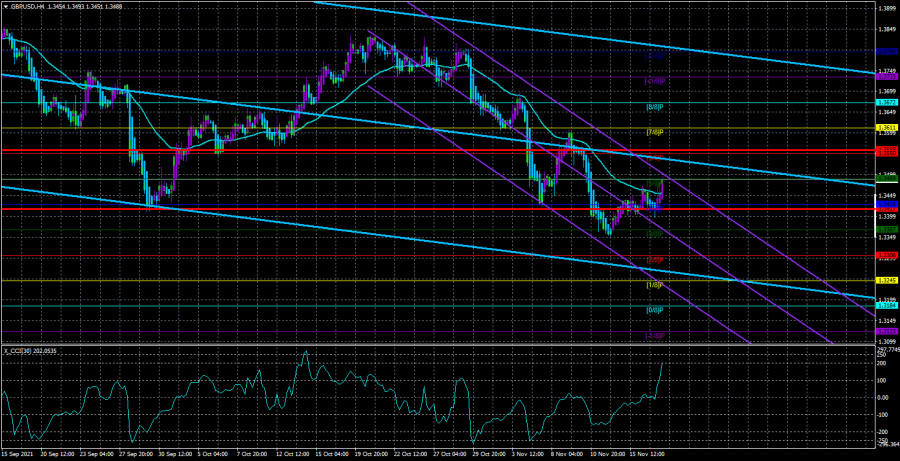 The GBP/USD currency pair continued its corrective movement against the downward trend on the 4-hour timeframe on Wednesday. However, both linear regression channels are still directed downward. Therefore, even fixing the price above the moving average will not allow us to make a one-hundred-percent conclusion about the trend change. At the same time, the pound has fallen quite a lot recently and, like the euro, deserves at least a correction. In the article on the euro /dollar, we have already analyzed the reasons that, in our opinion, pushed the dollar up in recent weeks, but we also analyzed the reasons why the dollar still has rather weak prospects. By and large, everything now comes down to the monetary policy of central banks. And not even to the policy itself, but to the expectations of the markets that are associated with this or that Central Bank and its monetary policy. As it is easy to guess, the markets are waiting for a tightening of monetary policy in the United States and a faster curtailment of the QE program. However, how was it possible to predict how the majority of traders in the market would count and what they would expect? It's impossible. Therefore, we remind you that any hypothesis requires confirmation by technical signals and a picture. The first step towards a possible start of a new, global upward trend will be overcoming the moving average line. Then there is a gradual reversal of both linear regression channels upwards. And for this, it is also necessary that the fundamental background ceases to support the US dollar. However, unfortunately, the UK now remains the number one supplier of negativity in the world. Most of this negative news is still of a geopolitical nature, but you can't turn a blind eye to them either. By the way, inflation in the UK also continues to grow in October was 4.2% y/y.

The UK continues to make a bad mine with a bad game.

Yesterday, we already noted the senselessness of London's threat to put into effect Article 16 of the "Northern Ireland Protocol", which allows, if serious risks arise for the economy or the population of Northern Ireland (Great Britain), not to adhere to certain points of the agreement. However, British Brexit Minister David Frost immediately noted that his country does not seek to enact this article. A little later, the same Frost called on the European Union not to start a trade war with the Kingdom, as, in his opinion, it would not lead to anything good. At the same time, Frost also noted that the government headed by Boris Johnson may suspend the implementation of the part of the Brexit agreement that concerns Northern Ireland. Otherwise, David Frost's words simply cannot be interpreted. Frost also added that he did not understand how a trade war could help resolve the dispute over the regime on the border with Northern Ireland. And the same David Frost on the same day said that before Christmas, the UK and the European Union could agree on a new deal on the "Northern Ireland protocol". It should be noted that the European Union has so far in no way indicated its desire to completely revise the entire protocol. Negotiations between London and Brussels are continuing, but it is not known at what stage they are and what progress there is. Of course, I want to believe that everything will end, as with the negotiations on the trade deal last year. Although, as many experts have already noted after, this is not such a good deal. It does not take into account many aspects and spheres of the economy, and the Brexit agreement, as it turns out, contains a protocol that has not been able to work out even for a year. 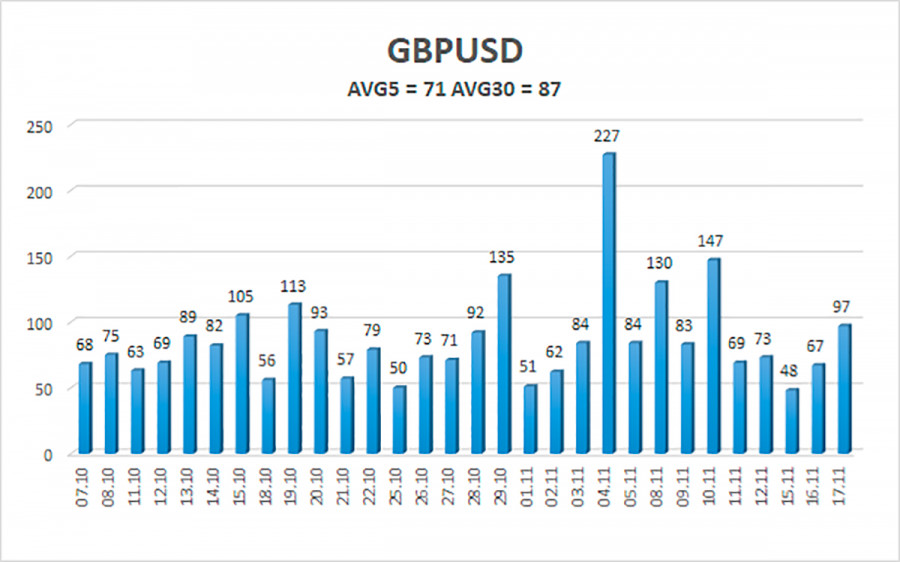 The average volatility of the GBP/USD pair is currently 71 points per day. For the pound/dollar pair, this value is "average". On Thursday, November 18, we expect movement inside the channel, limited by the levels of 1.3417 and 1.3558. The reversal of the Heiken Ashi indicator downwards signals a possible resumption of the downward movement.

The GBP/USD pair is trying to overcome the moving on the 4-hour timeframe, but a confident consolidation is required. Thus, new short positions with targets of 1.3367 and 1.3306 levels should be considered at this time, if the price remains below the moving average. Buy orders can be considered if the price is firmly fixed above the moving average line with targets of 1.3550 and 1.3611 and keep them open until the Heiken Ashi turns down.

Interesting? Write a comment below.
 Overview of the GBP/USD pair. November 18. The UK urges the EU not to start a trade war
Forward 
Backward 