Overview of the GBP/USD pair. November 19. Northern Ireland is calling for the protocol on its border to be dealt with as 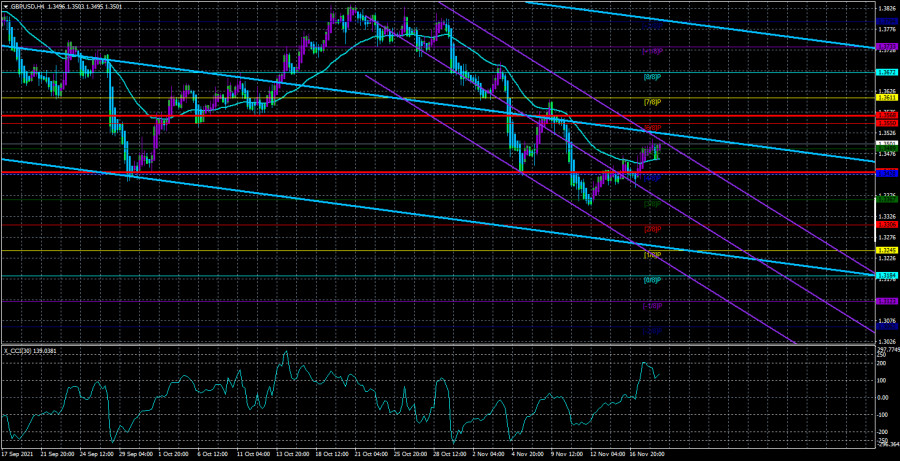 The GBP/USD currency pair tried to continue moving north on Thursday after it consolidated above the moving average line. Thus, formally, the trend has already changed to an upward one. Now everything will depend on the bulls and whether they will be able to find grounds for further purchases of the British currency. We have already said earlier that the fundamental background for the pound/dollar pair is extremely confusing at the moment. There are a huge number of factors that hypothetically can influence the movement of the pair, and it is also quite difficult to clearly understand which of them are taken into account by the market and which are not. Moreover, in recent weeks, the euro and the pound have been moving differently, although quite similar. However, the British currency is still much less willing to fall against the dollar and more willing to grow. Thus, we believe that the fact that the Bank of England made it clear at the last meeting that the key rate could be raised in the coming months is currently playing into the hands of the pound. And in this matter, it turns out that BA will overtake the Fed, which plans the first increase no earlier than April 2022. But the ECB, represented by Christine Lagarde, openly declares that the rate will not be increased next year, and who does not remember, we recall that in the European Union the rate is now -0.4%, that is, negative. And in the USA - 0.25%, in the UK - 0.1%. Thus, those who have reduced the rate less, in the end, will be the first to raise it. The US economy is larger than the UK economy. Therefore, the dollar feels better than the pound, and the pound is better than the euro.

In the last few days, we have been doing nothing but discussing problems related to the protocol on the customs regime at the border of Northern Ireland. Over the same few days, David Frost, the Brexit minister, managed to make several statements that can be considered quite contradictory. Representatives of the British government regularly talk about Article 16 and they do it for a reason. They make it clear that London will be ready to take this step in a conflict with the European Union. But at the same time, Frost says that no one sets a goal to put this article into effect at all costs. Britain wants to negotiate amicably with the European Union, according to Frost. However, the two-day trip of the Brexit Minister to Northern Ireland itself showed that this issue is very difficult because even the political forces of Northern Ireland cannot agree on what they need: the application of Article 16 or a peaceful solution to the conflict? For example, the Democratic Unionist Party believes that decisive action is needed if the European Union does not want to revise the entire protocol and will not do so in the near future. The party believes that Northern Ireland needs to fully restore its status in the UK market and the British government will have to take unilateral actions to protect Northern Ireland and its residents. But the Sinn Fein party believes that it is time to stop threatening the use of Article 16 since it is important that the conflict does not grow but on the contrary decreases. The Social Democratic Party believes that Article 16 could cause serious economic damage to Northern Ireland if London applies it. And the Alliance party said that it was necessary to sit down at the negotiating table and find a solution that would suit everyone. Thus, it was probably difficult for even David Frost himself to understand what they wanted from the protocol in Northern Ireland. Nevertheless, this question remains open, and how it will be solved is still very difficult to say. The British currency may experience problems if it feels a possible deterioration in relations between the Kingdom and the Alliance. 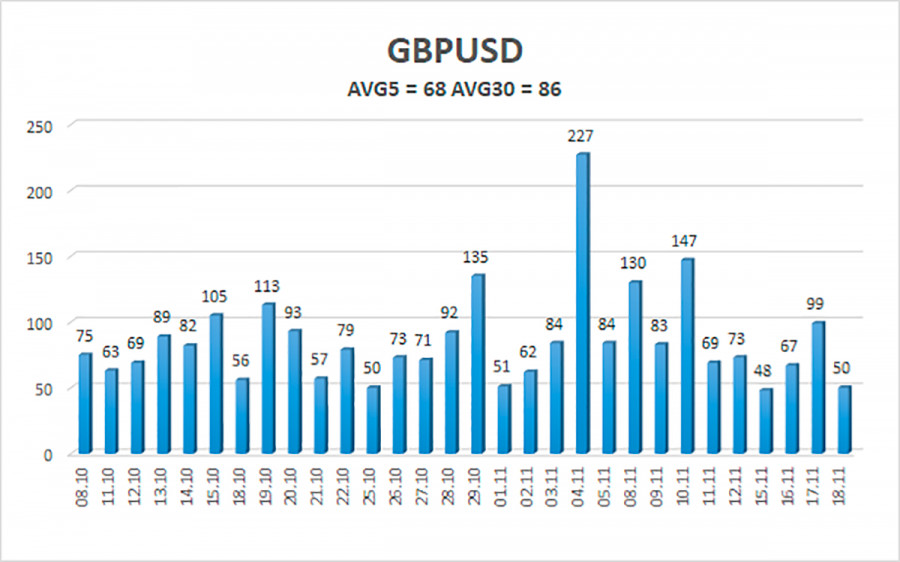 The average volatility of the GBP/USD pair is currently 68 points per day. For the pound/dollar pair, this value is "average". On Friday, November 19, we expect movement inside the channel, limited by the levels of 1.3430 and 1.3568. The reversal of the Heiken Ashi indicator downwards signals a possible resumption of the downward movement.

Interesting? Write a comment below.
 Overview of the GBP/USD pair. November 19. Northern Ireland is calling for the protocol on its border to be dealt with as
Forward 
Backward 