Overview of the GBP/USD pair. November 23. There is a new crisis in the UK. The "logistical crisis" has not been resolved 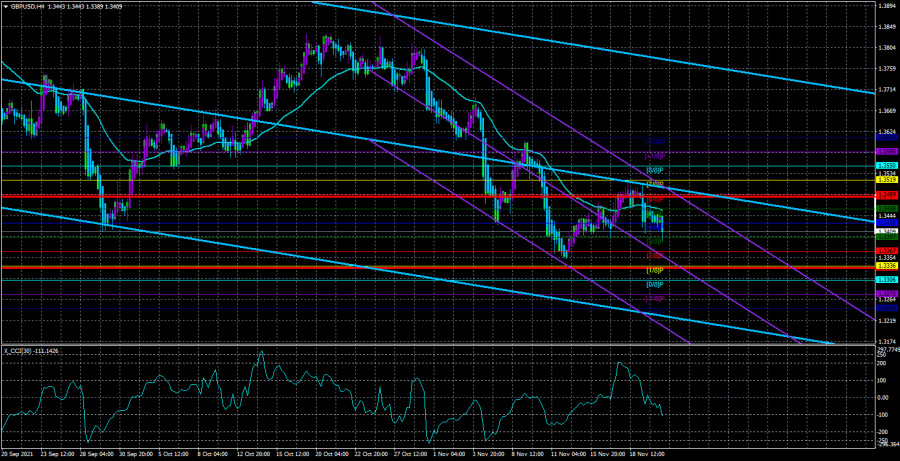 The GBP/USD currency pair on Monday also could not find reasons to refrain from a new fall. In the afternoon, the markets started selling the pair again, which so far leads to a resumption of the downward trend. Recall (and this is seen in the illustration above) that in recent weeks, the pound sterling has also depreciated against the US dollar. At the end of last week, the quotes were fixed above the moving average. However, the bulls could not develop their success, so at this time the pair is again in a downward trend. Both linear regression channels are still directed downward. Thus, although the pound sterling has a rather complex fundamental background, it seems that the markets are buying the dollar now on the same grounds as in the EUR/USD pair. On the 24-hour TF, it is visible that the movement for the pound/dollar pair is not the same as for the EUR/USD pair. The British currency is falling much weaker in the long run. However, this does not mean anything. The British pound has not been used to falling in recent years. And if the situation on Brexit, Scotland, and the "Northern Ireland protocol" deteriorate now, then the pound's position may weaken significantly. In general, whatever the nature of the movement, all technical indicators now indicate a downward trend, but there are no buy signals. Therefore, it makes no sense to think about buying the pair now.

Denmark also decided to accuse the UK of Brexit violations.

Recently, accusations have been pouring down on London, as if from a cornucopia. First, the European Union accused the Kingdom of unilaterally changing the terms of the Brexit agreement, then France accused it of violating the provisions on fishing in British waters, and now Denmark has also joined. It should be noted that at various times other EU members have also expressed the opinion that London is not fulfilling all its obligations after Brexit. Copenhagen also believes that the UK is going to ban bottom trawling in the protected area of the North Sea. Danish Fisheries Minister Rasmus Prehn said that such plans of London contradict the Brexit agreement, according to which European fishermen should have unhindered access to British waters for fishing until 2026. We are talking about only one area of the North Sea – the Dogger Bank, nevertheless, this area is one of the most important for Denmark.

At the same time, a new crisis is covering the UK. "The price growth crisis," if I may say so. Moreover, we are not talking about banal inflation, which at the end of October amounted to 4.2%. We are talking about the same phenomenon as in the United States when official inflation is one value, and the actual price increase in many areas of the economy exceeds it by several or even tens of times. For example, the price of gasoline in Britain has risen to the highest in the last 8 years. Food in supermarkets and services in cafes and restaurants are becoming more expensive. Judging by the data of the Federation of Food and Beverages, the price in restaurants and cafes increased by 14-18%. As you can see, these figures bear little resemblance to official inflation figures. Raw material prices are rising by 30-40%. Prices for air transportation and sea transportation are rising. At the same time, the "logistical crisis" in the country has not been resolved in any way. Yes, Boris Johnson's government involved the military in solving the problem, but, according to British media, it only helped to cope with the total shortage of gasoline at the gas station, but did not solve the problem completely. Truckers still do not want to go to the UK, there is a shortage of workers in many other areas of life and business. Thus, the pound sterling has grounds for further decline. The question is still the same: it is unclear exactly what fundamental topics the markets are now paying attention to. Therefore, technical analysis should come first in such a difficult situation. 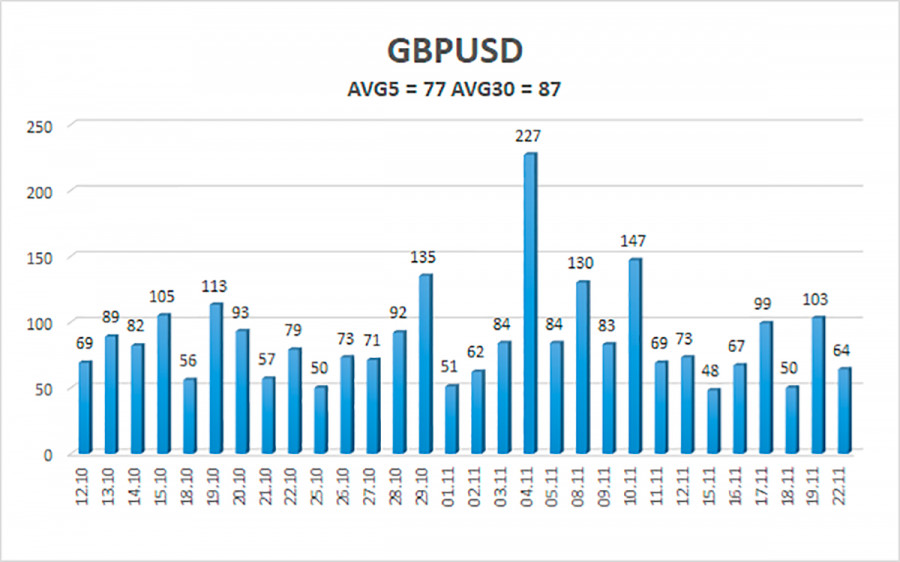 The average volatility of the GBP/USD pair is currently 77 points per day. For the pound/dollar pair, this value is "average". On Tuesday, November 23, we expect movement inside the channel, limited by the levels of 1.3332 and 1.3484. A reversal of the Heiken Ashi indicator upwards will signal a new round of upward movement.

Interesting? Write a comment below.
 Overview of the GBP/USD pair. November 23. There is a new crisis in the UK. The "logistical crisis" has not been resolved
Forward 
Backward 