Overview of the GBP/USD pair. November 24. The coronavirus is attacking Britain 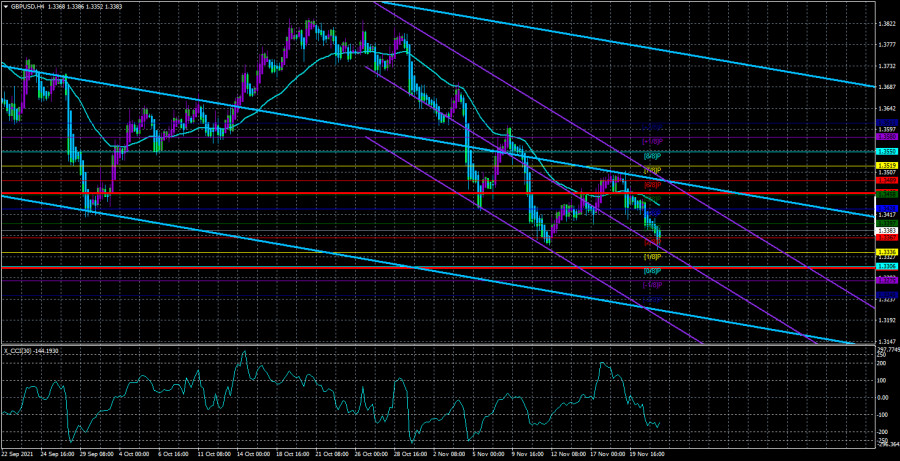 The GBP/USD currency pair also resumed its downward movement on Tuesday. Although there are no such serious epidemiological problems in the UK as in the European Union, the pound sterling has been getting more expensive in recent weeks as well as the euro. Thus, it should be recognized that the problems of the European Union and the rhetoric of Christine Lagarde are good reasons for the fall, but not the only ones. Most likely, it cannot do without the growth of the US dollar itself, which is the reverse side of the fall of the euro and the pound. And in the pound/dollar pair, there are also sales of the British currency itself, since everything is far from good in Britain now. Perhaps the only thing that is not bad in the UK right now is the situation with the "coronavirus". Although about 1 million citizens have fallen ill in Britain over the past month, and the country itself remains in second place in the world in terms of the spread of the virus, the Kingdom's government is not going to introduce a "lockdown" or tighten quarantine measures in the near future. It is difficult to judge whether this decision is correct or not. For a couple of years of Boris Johnson's rule, we have already managed to understand that the economy is put above healthcare. Britain from time to time, on each new "wave", showed either the highest levels of morbidity in the European Union, or the highest levels of mortality, and often both the first and the second. However, now that the incidence levels are close to the maximum levels of the third wave, London sees no reason for a new quarantine. "Of course, we are concerned about the potential of this disease, but so far we do not see anything that would require a transition to a "plan B". The best thing you can do is get a booster shot," Boris Johnson said. Thus, the situation with the epidemic in the UK is not critical, but it may worsen to critical in the near future.

The exit of Scotland, separatist sentiments in Wales, the accusations of Denmark and France.

What else, besides the situation with the "coronavirus", can put pressure on the pound, which has felt quite confident for most of 2021? Of course, this is the Fed's policy and the high expectations of the markets regarding its tightening. However, in the UK, the fundamental background remains such that it is also impossible to close your eyes to it and pretend that it does not matter. Scotland is not going to give up on the issue of its own "Brexit", separatist sentiments are beginning to grow in Wales, and the local Parliament is slowly beginning to be filled with representatives of radical parties that support separation from England. It should be noted that the main reason for the desire to hold a referendum in Scotland is reunification with the European Union. The main reason for the possible separation of Wales is the status of a "coal appendage" in the UK. The Welsh are a small but proud people, and in the last couple of decades, it has become very fashionable to hold referendums and declare independence. So now, of course, all this is more talk, but in the future, we will not be surprised if Wales wants to hold its referendum. In addition, in the European Union, the dissatisfaction of individual countries with the actions and plans of Britain is maturing more and more. It is not yet possible to agree on the "Northern Ireland protocol", Boris Johnson and his entourage continue to throw threats of the "16th article", and every couple of months one or another EU member state accuses the UK of non-compliance with the terms of the current Brexit agreement. Thus, there is no positive news on this front either. And although we do not believe that this fundamental background could exert independent pressure on the pound, nevertheless, together with other factors, it may well be.

What do we have in the end? Although the pound sterling has been falling for most of 2021, so far this decline continues. A lot will depend on the meetings of the Fed and the Bank of England in December. A change in the monetary policy of the first or second may affect the mood of market participants. But for now, the markets are set to continue selling the euro and the pound for dollars. 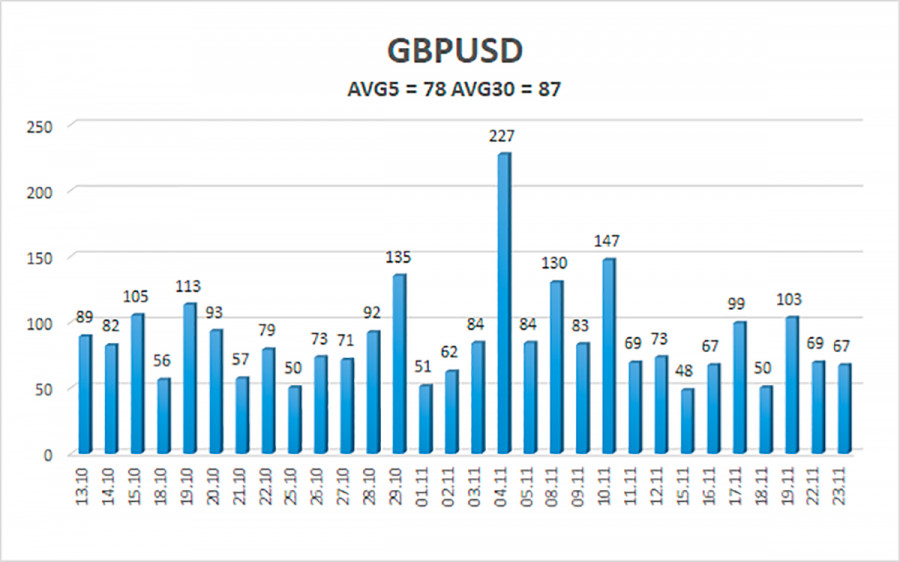 The average volatility of the GBP/USD pair is currently 78 points per day. For the pound/dollar pair, this value is "average". On Wednesday, November 24, we expect movement inside the channel, limited by the levels of 1.3305 and 1.3462. A reversal of the Heiken Ashi indicator upwards will signal a round of upward correction.

The GBP/USD pair overcame the move in the 4-hour timeframe. Thus, at this time, it is necessary to remain in short positions with the targets of 1.3336 and 1.3306 levels until the Heiken Ashi indicator turns upwards. Buy orders can be considered in the case of a confident consolidation of the price above the moving average with targets of 1.3489 and 1.3519 and keep them open until the Heiken Ashi turns down.