Overview of the GBP/USD pair. November 3. France has changed its mind about developing a "fish conflict" with the UK 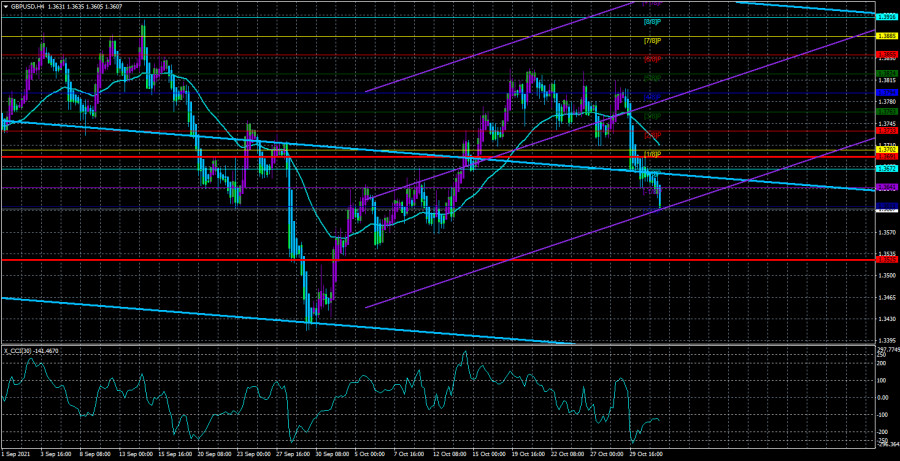 The GBP/USD currency pair continued its downward movement on Tuesday, unlike the EUR/USD pair. Thus, we once again draw the attention of traders to the fact that both major currency pairs continue to trade differently, which happens extremely rarely. Over the past month, the British pound has been actively rising in price against the dollar, while the euro currency has been standing in one place in pathetic attempts to adjust. In the last week, the pound has been actively declining, while the euro cannot determine the direction of movement. Thus, various fundamental factors are still acting on the pair. This is the only thing that can be assumed. However, it is very difficult to say which factors affect the pound and the euro differently. Simply because now there are no unambiguously burning and important topics that could with absolute probability affect the mood of traders. There have been a lot of interesting things in the States lately. Starting with the threat of a "technical default" of the country, ending with Joe Biden's desire to spend about $ 5 trillion on infrastructure and social needs, which is desperately blocked in the Senate. There was also information about a new corporate tax, a new tax for cryptocurrencies, the withdrawal of the US military from Afghanistan after 20 years of being in it. And there was even more interesting in the UK. Since 2016, Britain has been living in a state of extremely strong, important, and constantly ongoing fundamental background. Recently, London has faced a new outbreak of the "coronavirus" (although the entire adult population has already been vaccinated), with a new misunderstanding on the part of the European Union regarding Brexit and the protocol on the border with Northern Ireland. And at the beginning of this week, it became known that there was a conflict between Britain and France. Namely, on the "fish issue", which was a "stumbling block" at the stage of negotiations on a trade agreement last year. And at the moment, the pound is falling. One could conclude that because of the tension in relations with France. Only France made it clear yesterday that it would not accept any sanctions against the UK.

As we wrote in the last article, London and Paris exchanged mutual accusations and threats to take action if the opposing side does not back down. As it turned out, Paris backed down, which the day before yesterday threatened to impose sanctions against British vessels in French waters and French ports if London did not issue fishing licenses to all fishermen from France within 48 hours. However, as it turned out, London refused to obtain a license to only a few vessels that had problems with documents. Either Emmanuel Macron was not informed about this, or he was reported, but only in general terms, without details. However, on Monday, at the G-20 summit, he had a conversation with Boris Johnson, after which a mutual exchange of threats began. London frankly did not understand why it was threatened with sanctions, and decided, without thinking twice, to start threatening sanctions in response. Paris very quickly retracted its words and, motivating this decision by the need to give both sides time to discuss all the difficulties that arose, decided not to impose any sanctions against British ships and sailors.

However, it is unlikely that this topic will end there. It is unlikely that the topic of the "Northern Ireland protocol" will no longer be raised in the European Union or Britain. It is unlikely that the topic of Brexit and the agreement will never again cause conflicts between London and Brussels. Thus, theoretically, the pound may experience problems with growth against the dollar every time new geopolitical problems arise. Another thing is that in the last year and a half, it is the dollar that has been experiencing serious problems with growth against the pound. And anything can happen this week since two central bank meetings at once will have an impact on the mood of the markets. 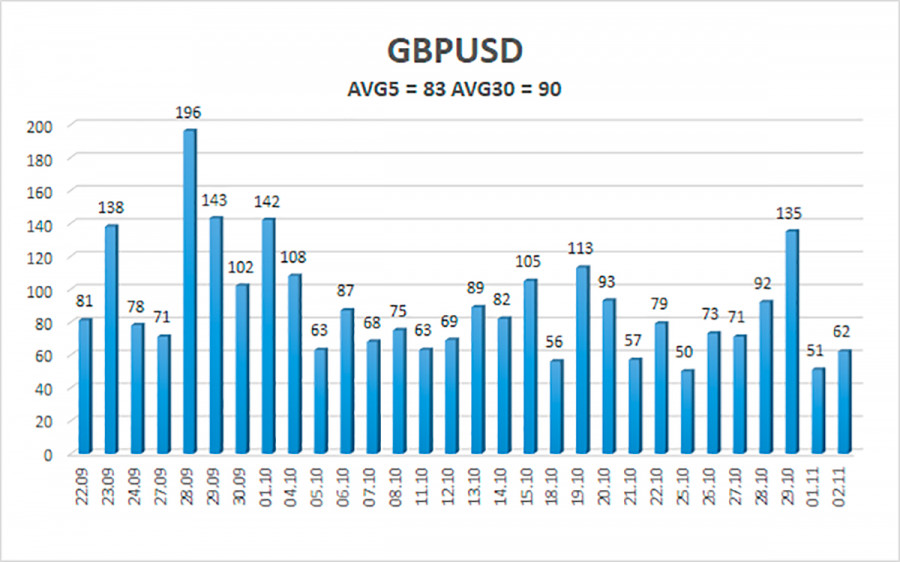 The average volatility of the GBP/USD pair is currently 83 points per day. For the pound/dollar pair, this value is "average". On Wednesday, November 3, we expect movement inside the channel, limited by the levels of 1.3525 and 1.3691. The upward reversal of the Heiken Ashi indicator signals a round of corrective movement.

The GBP/USD pair continues to be below the moving average on the 4-hour timeframe, so the trend remains downward. Thus, at this time, it is necessary to keep open short positions with targets of 1.3611 and 1.3525 levels until the Heiken Ashi indicator turns upwards. Buy orders can be considered again if the price is fixed above the moving average line with targets of 1.3733 and 1.3763 and keep them open until the Heiken Ashi turns down.

Interesting? Write a comment below.
 Overview of the GBP/USD pair. November 3. France has changed its mind about developing a "fish conflict" with the UK
Forward 
Backward 