Overview of the GBP/USD pair. November 30. The British pound does not react to omicron. Only Boris Johnson reacts to omicron. 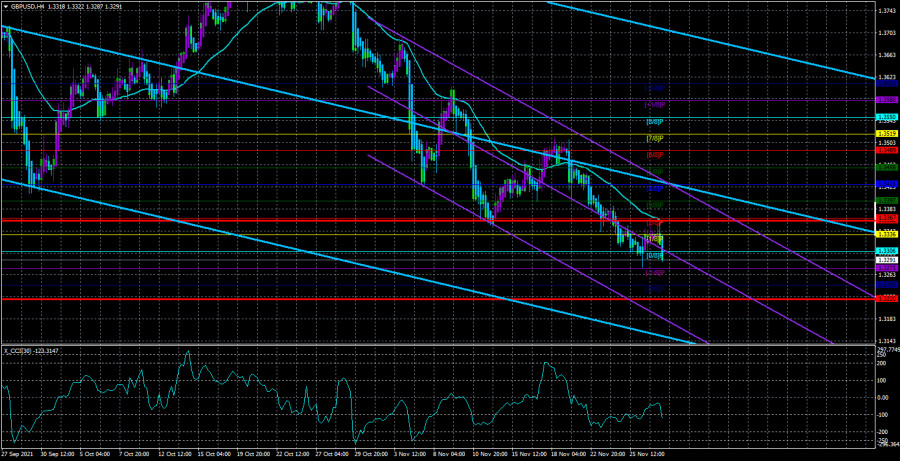 The GBP/USD currency pair on Monday, unlike the EUR/USD pair, could not even gain a foothold above the moving average line. The markets on Friday did not even begin to fix profits on previously opened short positions, as they did on the euro/dollar pair. It is also unlikely that such a weak movement on Friday and Monday can somehow be linked to the new strain of the "coronavirus-omicron". If the US stock indices collapsed on Friday, which, with an empty calendar of macroeconomic events, may be due to disappointing epidemiological news, then the pound/dollar currency pair showed absolutely nothing either on Friday or on Monday. Thus, at this time, there are excellent chances for the pound to continue falling, although, in 2021, it was the British currency that became cheaper against the dollar much more reluctantly than the euro currency. However, in recent months, the UK has been covered by a new "wave" of negative messages and events that may put pressure on the pound. We say "they can", because there is no way to verify this for certain. If the pound were falling now, then we could try to link such a movement with the current fundamental background, but the pound in 2021 is only in a downward trend, which in global terms is a correction against an upward trend. Consequently, the entire downward movement of 2021 may be "technical", may be based on American factors, may be based on a combination of factors from America and Britain. Thus, the unresolved issue of the "Northern Ireland protocol", the accusations of France in the UK's refusal to issue fishing licenses, the accusations of Germany and Denmark in non-compliance with the terms of Brexit, the "logistical crisis", the "personnel crisis", the "gasoline crisis", the epidemiological crisis (Britain remains in 2nd place in the world in the number of new cases of COVID), all this can create pressure on the British pound.

However, if the pound and dollar are not paying any attention to omicron yet (and it is not surprising, since the strain has just been discovered), then the governments of some countries of the world are already sounding the alarm. It is not surprising that one of the world leaders who urge not to ignore the new strain is Boris Johnson. The Prime minister of a country that is in one of the first places in the world in terms of the number of victims from the "coronavirus" and the number of cases of the disease. And also by the rate of vaccination, which, as we can see, does not particularly save from infections with new types of virus. Boris Johnson has already tightened the rules of social behavior within the country. Now all British citizens are required to wear masks in all public institutions, as well as in transport. In addition, Britons arriving in the country will be required to take a PCR test and remain in self-isolation until they receive a negative result. However, such measures do not seem "draconian" or at least "tough". As the previous "waves" and "strains" have shown, simply wearing masks and self-isolation may not be enough to stop the spread of the virus. But Boris Johnson convened a summit of G7 health ministers to discuss the situation with the new strain. The conference was supposed to take place yesterday, so today we can get new information about this. The foreign exchange market should now closely monitor the spread of the "omicron strain" around the world, since in the future it may affect the exchange rates of many currencies. The only question is how strong its spread will be, and what its consequences will be. Recall that now the EU countries and without Omicron are in the midst of the fourth "wave". "Omicron" can further aggravate the situation. And the economies of the European Union and the UK do not need new shocks now. There will be no interesting, planned events in the UK today, and Janet Yellen and Jerome Powell will give speeches in the States. They can also touch on the topic of a new strain in their speeches. 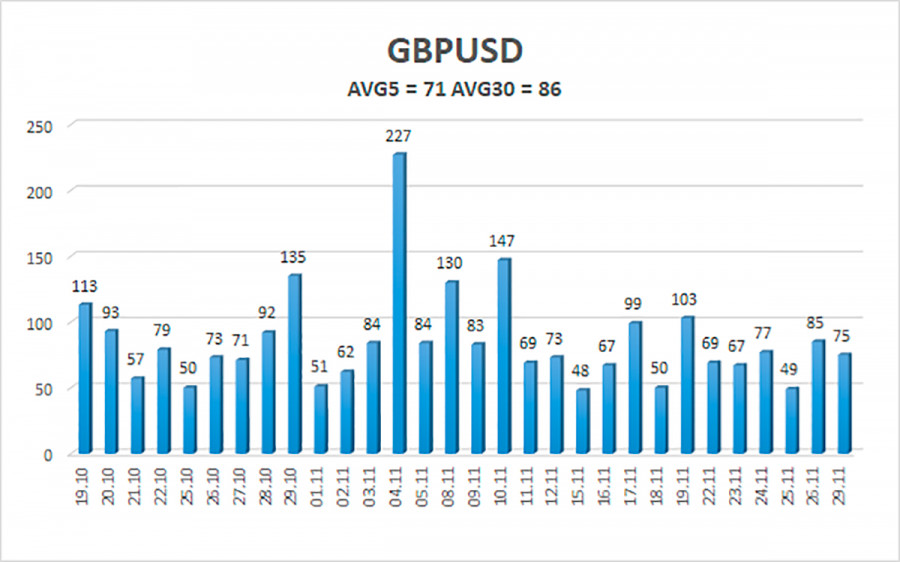 The average volatility of the GBP/USD pair is currently 71 points per day. For the pound/dollar pair, this value is "average". On Tuesday, November 30, we expect movement inside the channel, limited by the levels of 1.3220 and 1.3362. The upward reversal of the Heiken Ashi indicator will signal a new round of upward correction.

The GBP/USD pair continues to move downwards on the 4-hour timeframe. Thus, at this time, it is necessary to remain in short positions with the targets of 1.3248 and 1.3220 levels until the Heiken Ashi indicator turns upwards. Buy orders can be considered in the case of a confident consolidation of the price above the moving average with targets of 1.3397 and 1.3428 and keep them open until the Heiken Ashi turns down.

Interesting? Write a comment below.
 Overview of the GBP/USD pair. November 30. The British pound does not react to omicron. Only Boris Johnson reacts to omicron.
Forward 
Backward 