Overview of the GBP/USD pair on November 5. The Bank of England tightened the "hawkish" attitude, but the pound still fell 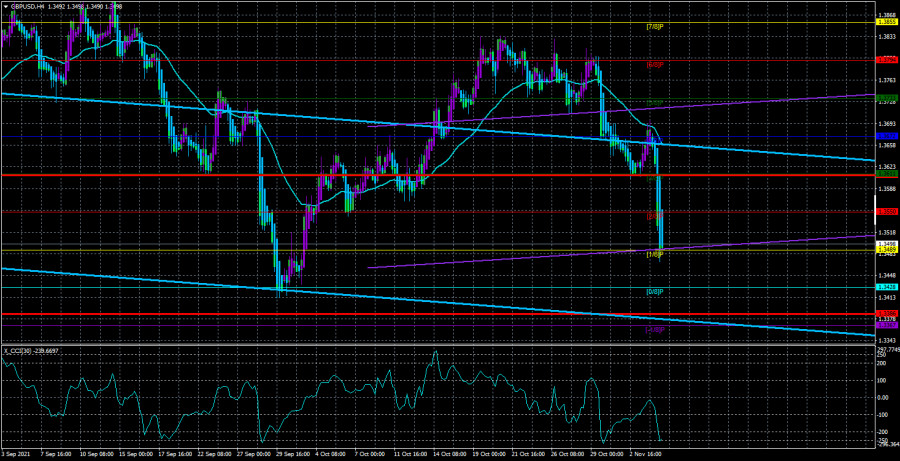 The GBP/USD currency pair collapsed downwards on Thursday. Recall that yesterday we repeatedly said that the results of the central bank meeting need to be comprehended for at least a day and it is not necessary to draw premature conclusions. We also said that the reaction of the markets to the results of the meeting is impossible to predict. We were right. And in the case of the British pound, this statement had a double meaning, since two meetings of central banks were held on Wednesday and Thursday at once: the Fed and the BA. And what conclusion can be drawn now? The US dollar initially fell, although the Fed announced the curtailment of the quantitative stimulus program. It fell when it was supposed to grow. Then the growth of the US currency began, which could be explained by the fact that initially, the markets did not draw the right conclusions. But already on Thursday, when the results of the BA meeting became known, the pound was falling, although these results can also be called "moderately hawkish". This means that the pound was falling when it should have been rising. This is the reaction of the markets we eventually saw. We will consider the results of the BA meeting a little below, but for now, it should be said that the downward trend that formed a couple of weeks ago remains in force, and the pound fell by more than 150 points on Thursday. It seems that the Bank of England has stated that it is not going to tighten monetary policy in the coming years, and the QE program will be in effect for another couple of years. As a result, now we have to wait for the markets to calm down after this event, and the pair "came to its senses" a little. Because now there is no question of any calmness.

The Bank of England has said it is ready to raise the key rate to 1% next year.

Now let's consider the actual results of the meeting of the British regulator. The key rate, as expected, remained unchanged at 0.1%. The volume of purchases of securities also remained at the same level of 895 billion pounds. Thus, the key parameters of monetary policy have not changed. However, there were also important statements, as well as important voting results of the monetary committee. In particular, the final communique stated that BA could raise the key rate to 1% over the next year. From our point of view, this is a very strong statement, since the regulator has made it clear that it is not going to wait "by the sea for the weather", but is ready to start tightening. Another question is, when exactly will this tightening begin? However, unlike the Fed, the BA still made its "hawkish" attitude clear, so the pound already had every reason to show growth. The second thing that should be noted is the number of members of the monetary committee who voted "for" curtailing the QE program. There were two of them at the last meeting. Now there are three of them and six more spoke out "against". Nevertheless, the Bank of England is confidently moving in the direction of curtailing this program. And no one expected to get ahead of the Fed on this issue. Recall that the Fed has also been "beating around the bush" for several months before finally starting to reduce monetary injections into the American economy. Thus, the second factor also worked in favor of the British currency, but instead of its growth, we saw a fall. Now we need to see what happens today. And whether the British pound will begin to recover quickly, as the US dollar was recovering a day earlier.

It should also be noted that yesterday a report on business activity in the construction sector was published in the UK, which exceeded the forecast values, but this did not help the British currency either. Therefore, it turns out that the market reaction was mixed after two meetings of central banks. By the way, it should be noted that two members of the monetary committee also voted for an increase in the key rate! Thus, the pound even had three reasons for growth. 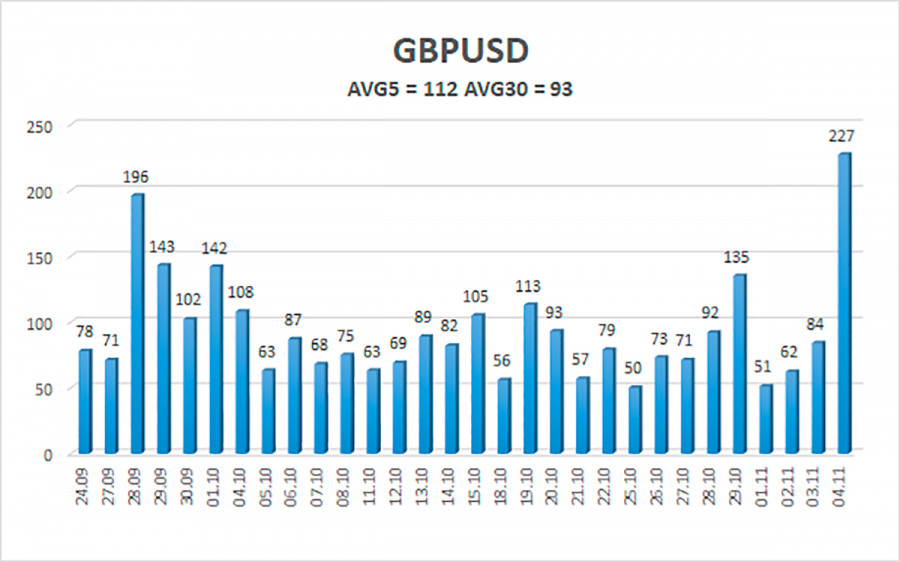 The average volatility of the GBP/USD pair is currently 112 points per day. For the pound/dollar pair, this value is "average". On Friday, November 5, we expect movement inside the channel, limited by the levels of 1.3386 and 1.3610. The upward reversal of the Heiken Ashi indicator signals a round of upward correction.

The GBP/USD pair continues to be below the moving average on the 4-hour timeframe, so the trend remains downward. Thus, at this time, it is necessary to remain in short positions with the targets of 1.3428 and 1.3386 levels until the Heiken Ashi indicator turns upwards. Buy orders can be considered if the price is fixed above the moving average line with targets of 1.3733 and 1.3794 and keep them open until the Heiken Ashi turns down.

Interesting? Write a comment below.
 but the pound still fell, Overview of the GBP/USD pair on November 5. The Bank of England tightened the "hawkish" attitude
Forward 
Backward 