The inflation data is much sadder than many people think. Traders are actively withdrawing funds to safe havens

It seems that we have received an answer to the question of two months ago, whether inflation is transient. Obviously not. Now central banks are busy asking how long it will stay with us, how hard it will hit, and what can be done about it.

The inflation data is much sadder than many people think. Traders are actively withdrawing funds to safe havens

So, we have the inflation figures for October, and they were bad. In fact, they were worse than the worst fears, as the US consumer price index exceeded the highest estimates provided by Bloomberg economists. That is, even pessimists from the economy were not able to imagine this figure. But when you start to understand the components, everything becomes almost catastrophic.

Is it really that bad? Let's figure it out.

Let's start with the official data. The Cleveland branch of the Fed has published a "truncated average" and median inflation rate. So, in October, the value of the first indicator reached its highest in the last three decades, and the specified median, which remained within acceptable limits until September, soared up to the level of 2008. In general, the truncated average is 5.3 points higher than the norm of the last ten years.

Let's look at the Atlanta data. They are interesting in the context of dynamic prices, since the prices of some goods change quickly, while others change over a longer period. The latter category reflects the so-called "sticky" inflation, i.e. the one that "sticks" to goods for a long time. Of course, this is what central banks around the world have tried to avoid. So, on an annualized basis, sticky inflation was 5.9%, giving the largest increase since January 1991.

This is a much more alarming figure than the general data on consumer prices.

Further. The New York Fed also compiles a basic inflation indicator based on data from the Bureau of Labor Statistics, and separately - taking into account macro data. Both of these indicators also exceeded 4%.

So there are already points in the official data from the Fed that may concern us.

Let's take into account that salaries in all industries are now lagging behind sharply rising prices, that is, in the near future we will see a massive revision of salary funds by employers in response to the demands of employees. This means that the difference will also fall into the cost price. However, this will be the most adequate inflationary component that the Fed Chairman has always wanted to see in the "normal" two percent of inflation per year.

Core inflation under the microscope

A new version of core inflation was introduced this year. In addition to food and electricity, it includes housing costs, as well as used cars, since price fluctuations in the latter category had a strong impact. If we exclude all these figures, we will get a more reliable indicator, which will also be more "sticky" in its essence. 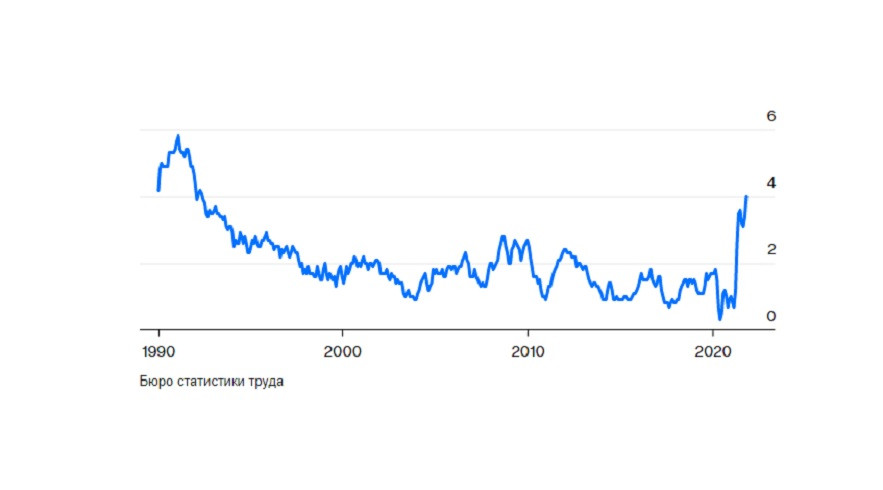 Alas, even without taking into account all these costs, the index still exceeds 4%, which is also the highest since 1991.

In addition, in this strange year, economists compared the figures not with the previous year, since there were lows, but with the pre-pandemic, taking the figures for the last two years. But here, alas: two-year inflation is also off the scale, and prices in the category of used cars have increased by more than 20% over this period.

Sectors that have recovered are also suffering from rising prices due to serious supply problems. For example, the cost of upholstered furniture and bedding has increased by 12% in the last month alone - this is the highest for the last 70 years.

Of course, there are segments left untouched by inflation. Compared to last year, drug prices decreased by 0.74%. However, last year was marked by exceptional demand for pharmaceuticals, and prices were very high. Therefore, the five-year cut gives us information that prices have not decreased in comparison with the pre-pandemic level.

School lunches have also become cheaper, but this is the result of the Congress' program to combat the consequences of the pandemic.

What's going on in the world?

In light of the above, it is important for us to remember that the United States is the benchmark for the rest of the world. At the same time, inflation will affect everyone.

For example, in Germany, which in turn is the reference economy for the eurozone, the overall inflation rate exceeded 4%, and the base rate exceeded 3%. 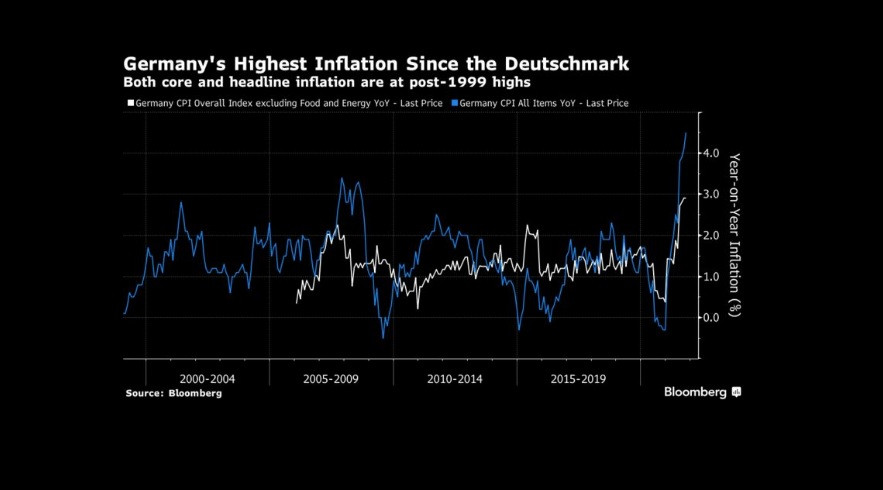 China, whose exports have a decisive impact on world prices, producer inflation has been showing highs over the past 25 years, although consumer inflation is still within the limits. This literally means that goods from China will soon cease to be cheap for you and me.

Rent is a yardstick in this industry. Housing costs account for 32.5% of the total price index, second only to gasoline in terms of expenses. And if you think about it, you will easily come to the conclusion that, in general, the entire general consumer price index is "tied" to the level of rent.

So far, this indicator is still within reasonable limits: currently, housing cost inflation has returned to the pre-pandemic level.

However, its share in the overall indicator is changing, because if you take away housing costs, the CPI is breaking records over the past four decades.

Can the rental of housing keep from price growth? No, because housing prices themselves are showing records. The analysis of the data in the time context convincingly shows that the increase in the cost of housing has always subsequently caused an increase in rent. This is understandable: the owners need to recoup their expenses for the purchased property. In addition, renters living off rent will suffer losses without such an increase, because their expenses are growing along with general inflation.

Let's not forget that due to the low interest rate of the Fed, real estate buyers have been able to take out a mortgage at a minimum rate of 1.5% for the last two years. Now the base mortgage rate has already exceeded 2%. If the Fed rate rises, the cost of housing will also rise. This means that the rent will rise, pushing the PC index up.

Who is to blame and what to do?

Well, it looks like the Fed's dovish flight is ceasing to be graceful. The upcoming appointment of the next chairman is also affecting the markets now. So, after an interview with the candidate for the post of Lael Brainard, the yield of 30-year bonds collapsed epically thanks to her assurances that her policy would be "peaceful."

One of the most significant events was that the 5-year break-even interval (predicting the average inflation rate for the next five years) exceeded 3% for the first time since the start of the contract and moved to a record wide spread exceeding the 5-year interval (which is forecast for five years after that). The Fed is closely following the latter. People are willing to pay more for insurance against future events because there is more uncertainty. The market's expectation that inflation will be significantly lower after 2026 than in the next five years suggests that there is still strong confidence that the Fed will have to take action.

In other words, the market is convinced that the Fed's patience will soon burst, and is betting that it has already departed from its policy too late. In fact, economists are sorely mistaken. Most likely, the new Fed chairman will continue his/her ultra-soft policy, shifting the burden of public debt to developing countries until the last. Only a global global crisis will force politicians to raise the interest rate, and rest assured, they will be the last to do so.

"In the last few days, we have witnessed how really voluminous information is coming in, which made people want to exit (from the market – author's note) and insure themselves against inflationary risks," Chris Weston said. "Bitcoin is doing well, and I believe cryptocurrency has succeeded as a hedge. Gold was growing at the same time as the stronger dollar."

As inflation gets higher, the probability of an interest rate hike increases, and this puts the most valuable stocks at risk. Globally, this means that the technology sector is most at risk. Any abandonment of these rising names is likely to benefit value sectors such as finance, raw materials and energy.

The bond yield curve is also flattening again. The difference between 5-year and 30-year yields shrank to levels not seen since March 2020, overnight after the inflation report. In other words, the markets were in the same psychological mood as at the worst moment of the pandemic. This suggests that bond traders are concerned about the state of the US economy or the risk of a political mistake on the part of the Fed.

Strengthening expectations of a rate hike soon after the Fed completes the reduction of its stimulus bond purchases will also lead to a stronger dollar. This risks triggering capital outflows from emerging market assets, which will affect stocks, bonds and other currencies.

But this is bad news for the US. If the dollar continues to strengthen— it will be a threat to economic recovery after the crisis, according to the International Monetary Fund. We should not forget that the US currency is dominant in international settlements. For this reason, if USD becomes more expensive, then it becomes more expensive for countries to import foreign products, including from America itself, because of this, demand for it decreases. The US is already losing its leading position in exports. An overly expensive dollar, coupled with inflation, will put American manufacturers at risk of a sharp decline in demand and closure.

Bitcoin is really becoming a leader in this race of safe havens. However, I am very concerned about the concentration of miners in the United States who have left China and found refuge in the stronghold of democracy. The US government is capable of acting decisively, and can destroy mining farms completely in a couple of months if it sees them as a threat to the dollar, which will exceed the bonuses that financiers currently receive in liquid cryptocurrency markets.

Interesting? Write a comment below.
 The inflation data is much sadder than many people think. Traders are actively withdrawing funds to safe havens
Forward 
Backward 