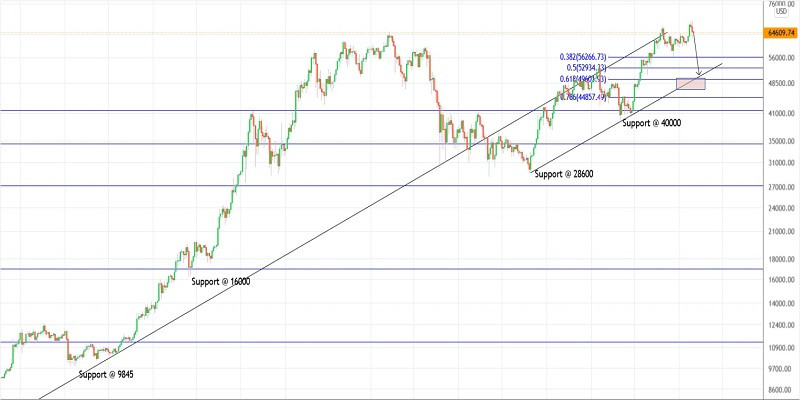 Bitcoin has yet again hit all-time highs around $69,000 on Wednesday before pulling back lower. The crypto is trading close to $65,000 at the time of writing and could drag further lower through the $49,000-50,000 mark before resuming its rally. Despite the ongoing rally, bitcoin remains vulnerable to a pullback from its new high.

It is still advisable to book profits on long positions taken earlier and remain flat for a while. Bitcoin correction towards the $50000 mark would be seen as a retracement of the rally between the $40,000 and $69,000 levels respectively. The Fibonacci 0.618 retracement of the above rally is seen passing through along with channel support as discussed earlier.

The high probability remains for a bullish reversal if prices managed to reach $50,000 in the near term. On the flip side, a break below the channel support and $40,000 price support might change the immediate bullish scenario. In that case, bears might want to test $28,600 support before giving in to bulls again.