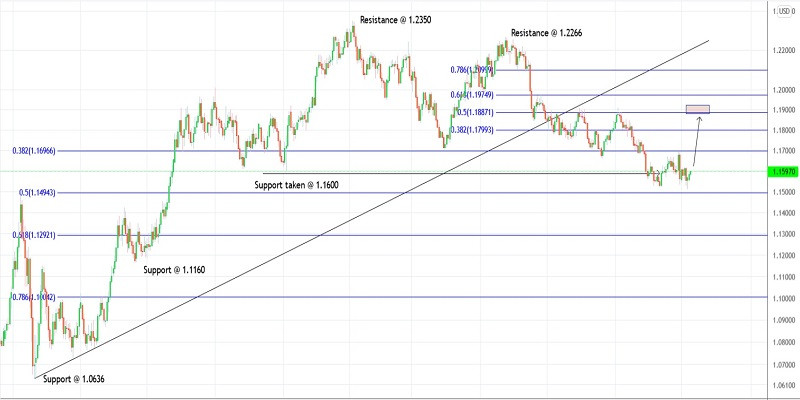 EURUSD is trading near its intraday's high around 1.1600 at the time of writing/ It is likely to break above1.1620 initial resistance. The pair is expected to produce a pullback thereafter. Bulls might be poised to be back in control around the 1.1550-60 levels after the corrective drop is complete. A break above 1.1620 will confirm that EURUSD has bottomed around the 1.1514 mark over the last week.

EURUSD is facing immediate resistance at 1.1620, followed by 1.1693, while support is around 1.1514 respectively. A potential inverted head and shoulder pattern might be forming on the 1H chart, where the neckline is around the 1.1620 mark. If the structure unfolds accordingly, bulls would be targeting 1.1700 and higher levels in the coming weeks.

The overall wave structure also presents a bullish scenario until prices stay above 1.1500 handle. The corrective drop that had begun from the 1.2350 level seems to be complete at 1.1514. If this holds well, EURUSD could push higher above the 1,2350 mark in the medium term. On the flip side, a break below 1.1514 would give bears the opportunity to take the lead.