Trading plan for the GBP/USD pair for the week of November 15-19. COT (Commitments of Traders) report. Spontaneous and unexpected

The GBP/USD currency pair continued its downward movement during the current week and overcame the first support level at the 24-hour TF 1.3461. In general, the downward trend persists and is visible to the naked eye, however, we once again draw the attention of traders to the fact that corrections within this trend are very deep and quite frequent. Despite the fact that the correction has lasted for about 8 months, during this time the pound sterling has managed to adjust by only 30% against the global uptrend. For example, the euro currency has adjusted by more than 50% over the same period. Thus, the British currency, as before, is very reluctant to give its positions to the dollar. Although just the pound sterling should become cheaper much stronger than the euro currency, given the number of problems and potential problems that exist now in the Foggy Albion. However, the pound shows its resilience and fights for every cent of its own rate. This week, the pair's fall was provided by the same single report on inflation in the United States, which rose to record values over the past 30 years. All the other data (and there were few of them) practically did not interest the markets. Thus, a new round of upward movement had already begun this Monday (as we expected last weekend), but strong macroeconomic statistics spoiled everything. It was impossible to predict such a strong increase in inflation in the United States. However, little has changed for the pound/dollar pair now. We are still waiting for a new round of upward movement, as there are no special reasons for further growth in the dollar after it has already risen by 450 points in two weeks. 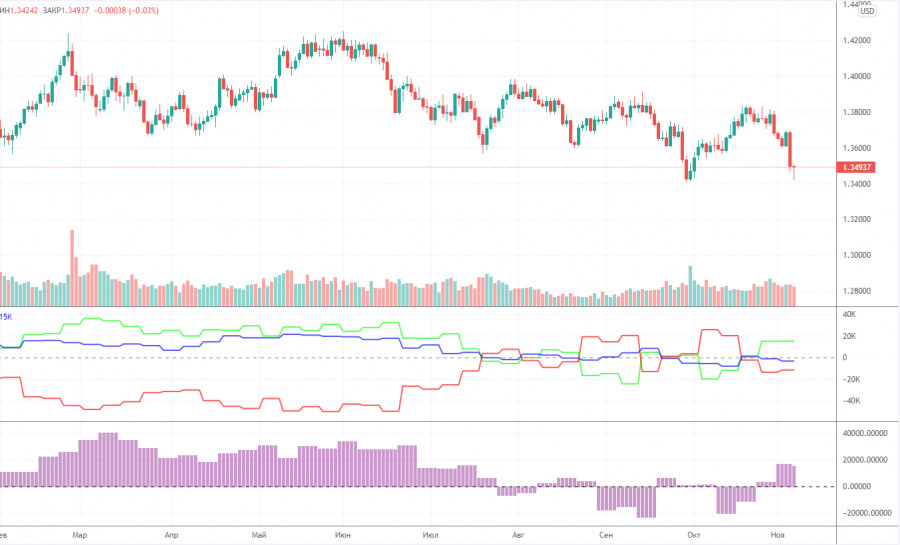 During the last reporting week (October 26 – October 1), the mood of professional traders practically did not change. However, it should be noted that the two most important days of last week – Wednesday and Thursday - when all the strongest movements occurred, were not included in the latest report. That is, in the next report we will be able to see how much and in which direction the mood of professional traders has changed. In the meantime, we can only draw the same conclusions as a week ago. The green and red lines of the first indicator continue to constantly change the direction of movement, constantly intersect. This suggests that the big players themselves do not understand what to do with the pound sterling. However, this can be clearly seen from the very schedule of the pair's movement, starting from July. All these 4 months, the pound/dollar pair has been between the levels of 1.3400 and 1.4000, that is, in the side channel. It was during this period of time that commercial and non-commercial traders changed their mood almost every week. Thus, taking into account the previous changes, we would assume that a new growth of the British currency will begin in the near future with the prospect of a 500-point rise. Moreover, the results of the Bank of England meeting were not "dovish". The British currency has fallen undeservedly, which means that the markets may soon recoup this injustice. It should also be noted that during the reporting week, professional traders opened 5.8 thousand contracts for purchase and 7.5 thousand contracts for sale. Thus, the net position has not changed much. The new COT report was not released on Friday, so we are waiting for it on Monday.

This week, in addition to the above-mentioned report on inflation in the United States, a fairly important report on British GDP was also released. As in the US two weeks earlier, GDP turned out to be weaker than forecast, which hit the British currency even harder. It should be noted that in the UK, as they say, "not a day without bad news." At the moment, there is an open question of a trade war between the EU and the Kingdom, since the parties cannot come to a common denominator on the issue of the "Northern Ireland protocol". Britain threatens to invoke article 16 and cease to comply with the protocol. In this case, the European Union threatens to cancel the entire Brexit agreement and at the same time the trade agreement, as well as restrict Britain's access to the EU energy market and impose duties on imports from the Kingdom. At the same time, Boris Johnson and his fellow party member got into a corruption scandal. And these are just a couple of recent news from the Foggy Albion. In general, the fundamental background remains weak for the British pound, but previously the same background was simply ignored by the markets. Therefore, it is very difficult to predict whether it will have any significance now.

Trading plan for the week of November 15th - 19th:

1) The pound/dollar pair failed to overcome the upper boundary of the Ichimoku cloud. If it manages to gain a foothold above it once, then the trend may change to an upward one, and in this case we recommend buying a pair, since the probability of forming a new upward trend will increase significantly. However, the pair is still very far away from this, since it needs to overcome a distance of at least 300 points up. Thus, purchases are not relevant yet.

2) The bears managed to keep the pair below the Ichimoku cloud and now continue to develop their success. The support level of 1.3461 has been overcome, so the chances of further movement to the South have increased, and the target is the support level of 1.3246. However, you should be careful. The fall this week was spontaneous and unplanned. Next week, traders may try to start forming a new round of upward correction.

Price levels of support and resistance (resistance /support), Fibonacci levels – levels that are targets when opening purchases or sales. Take Profit levels can be placed near them.

Indicator 1 on the COT charts is the net position size of each category of traders.

Indicator 2 on the COT charts is the net position size for the "Non-commercial" group.

Interesting? Write a comment below.
 Trading plan for the GBP/USD pair for the week of November 15-19. COT (Commitments of Traders) report. Spontaneous and unexpected
Forward 
Backward 