Trading plan for the GBP/USD pair for the week of November 22-26. New COT (Commitments of Traders) report. The British currency 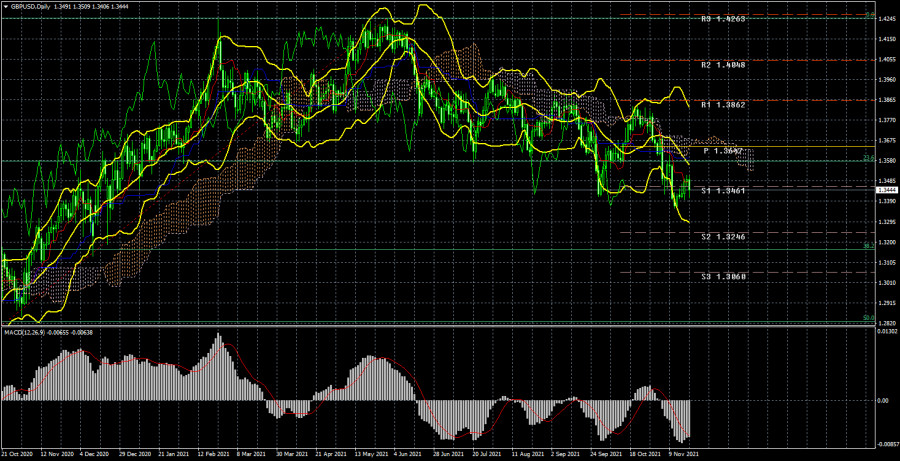 The GBP/USD currency pair has started a new round of correction during the current week. At least, I tried to start it. On Friday, the simultaneous fall of the euro and the pound followed, which is quite difficult to explain, since there were no important publications and speeches in America that day. And in any case, the fall of European currencies began in the morning, when America was still asleep. However, for the rest of the week, the British currency showed an uncertain growth, unlike the euro. Recall that the entire segment, starting from February of this year, when the fall of the pair began, looks like a corrective one. If for the euro/dollar pair the chances of a corrective movement status in 2021 are decreasing, then for the pound/dollar pair they are growing. Frequent and deep corrections do not allow us to conclude that the current movement is a trend. Nevertheless, there is still a downward trend, so short positions remain more preferable. At the same time, we have already said in previous weekly reviews that it would be very logical to see a new round of upward movement of 400-500 points now. A week earlier, it also started, but everything was spoiled by the US inflation report, which provoked a strong dollar growth. There was nothing to spoil the bullish mood of the markets this week, so we still saw a slight increase, which may continue next week. Recall that the pound is still getting cheaper against the dollar much less willingly than the euro currency. And at the same time, it is growing more confidently than the euro. At the moment, the pound has not even managed to adjust by 38.2% against the entire upward trend of 2020. Meanwhile, the euro adjusted by 61.8%. 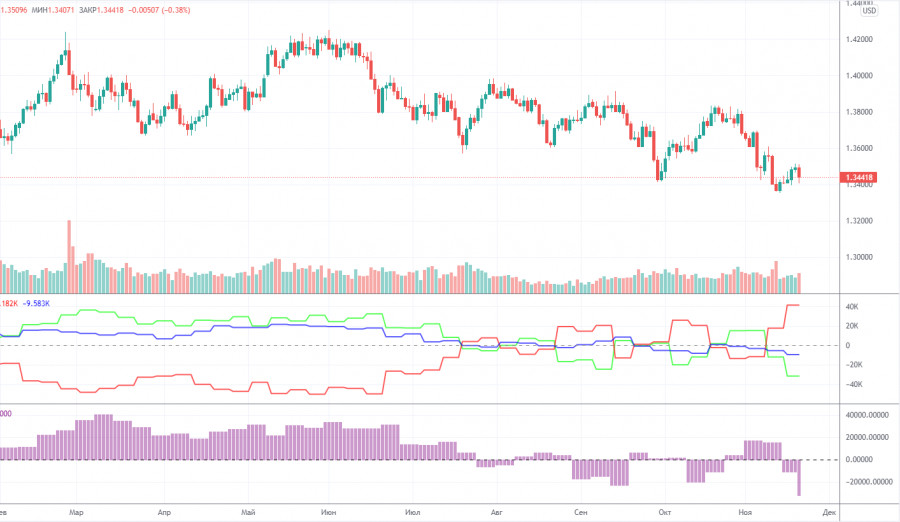 During the last reporting week (November 15-19), the mood of professional traders became much more "bearish". However, this should not be surprising, since the mood of major players has been constantly changing over the past few months, which perfectly reflects the first indicator in the illustration above. The green and red lines, which indicate the net positions (in other words, the mood) of non-commercial and commercial traders, constantly change the direction of movement and constantly change their position relative to the zero level. The last reporting week only confirmed these conclusions. The green line has dropped significantly again, and the red line has increased significantly, although a couple of weeks ago, it was the opposite. Thus, formally, the mood of professional traders has become more "bearish", but in reality, it changes every couple of weeks, so it is impossible to make a long-term conclusion. During the reporting week, the Non-commercial group closed 4,000 buy contracts and opened 17,000 sell contracts. Thus, the net position decreased by 21 thousand contracts at once, which is a lot for the pound. However, this does not matter much, since the net position of non-commercial traders also constantly jumps up and down, which is eloquently signaled by the second indicator in the illustration above. It should also be noted that in the long term, the pound/dollar exchange rate itself also constantly jumps up and down. Thus, it is not possible to make a long-term forecast based on COT reports.

In principle, the current week for the British currency was quite successful in fundamental and macroeconomic terms. Andrew Bailey did not say anything "dovish" in his speeches. Reports on unemployment in the UK and on inflation were stronger than forecasts. We were also pleased with the retail trade data. But, unfortunately, there is also a general fundamental background for the pound, of a non-economic nature. The geopolitical problems of the pound are not going anywhere. They are only growing. At the moment, the UK and the EU cannot agree on the revision of the "Northern Ireland Protocol", so all economists can stock up on popcorn to watch the new months-long saga of negotiations between Brussels and London. Unfortunately, the new saga may well end in a trade war or sanctions, because London insists on a complete revision of the protocol, and the European Union refuses such a "generous" and "profitable" offer. And by and large, it is not obliged to meet Britain halfway at all, since the Brexit agreement has already been signed and cannot be changed if only one party to the deal wishes. However, the pound may be supported by the Bank of England next month if it starts to wind down its stimulus program or raises the key rate.

Trading plan for the week of November 22-26:

1) The pound/dollar pair failed to overcome the upper boundary of the Ichimoku cloud. If it manages to gain a foothold above it once, then the trend may change to an upward one, and in this case, we recommend buying a pair, since the probability of forming a new upward trend will increase significantly. However, the pair is still very far away from this, since it needs to overcome a distance of at least 200 points up. Thus, purchases are not relevant yet.

2) The bears managed to keep the pair below the Ichimoku cloud and now continue to develop their success. The support level of 1.3461 has been overcome, so the chances of further movement to the south are high, and the target is the support level of 1.3246. However, we should be careful: we still expect the formation of a new round of upward correction, based on the general nature of the pair's movement for the whole of 2021.

Interesting? Write a comment below.
 Trading plan for the GBP/USD pair for the week of November 22-26. New COT (Commitments of Traders) report. The British currency
Forward 
Backward 