Trading plan for the GBP/USD pair for the week of November 29 - December 3. New COT (Commitments of Traders) report. The 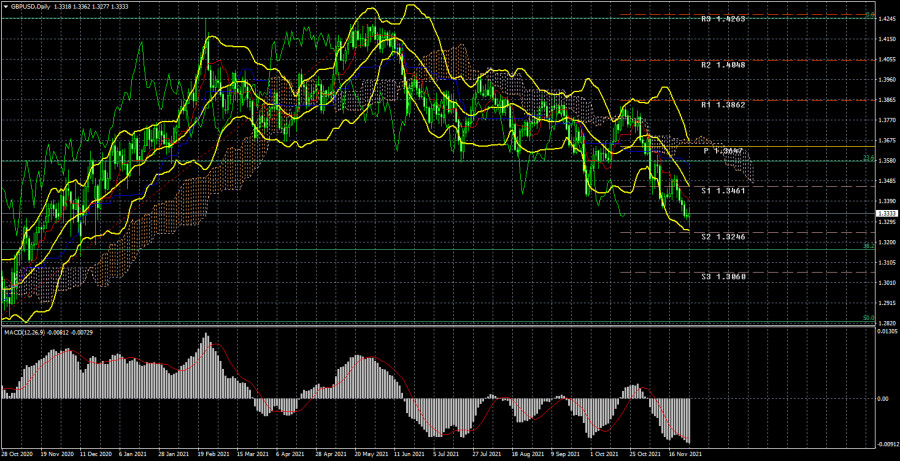 The GBP/USD currency pair continued its steady decline during the current week. If the euro currency significantly adjusted on Friday, then the pound sterling did not. It turns out that traders have not found any grounds for correction for the pound. And this is quite strange since it is the pound sterling that has been declining much less willingly than the euro in recent months. Nevertheless, the pound is also maintaining a downward trend, which is visible to the naked eye. However, the general movement is again not as strong as in the euro. In total, the pound/dollar pair did not adjust against the global upward trend of 2020 even by 38.2%. And the euro/dollar adjusted by more than 61.8%. Thus, we still believe that the British currency has a better chance of starting a new upward trend. As for the reason for this, the Bank of England can help the pound, which in November unexpectedly showed its readiness to raise the key rate. If the number of members of the monetary committee voting for an increase increases in December, this may support the pound. Also, do not forget that the pound/dollar pair has already fallen by 550 points over the past 5 weeks. Therefore, given the nature of the pair's movement in 2021, it is high time to start a new round of upward movement. We have been waiting for it for several weeks, but the current fundamental background from the UK does not seem to allow traders to seriously consider buying the British currency. The fact is that London continues to conflict with Brussels, Paris and cannot come to a common denominator on the issues that provoke these conflict situations. Yesterday, Paris again accused London of refusing to issue licenses to all French vessels to fish in British waters, and Maros Sefcovic said that at such a pace negotiations on the "Northern Ireland protocol" will continue next year. And while the situation does not improve, the pound can count on corrective growth. But, as we saw on Friday, he has problems even with that. 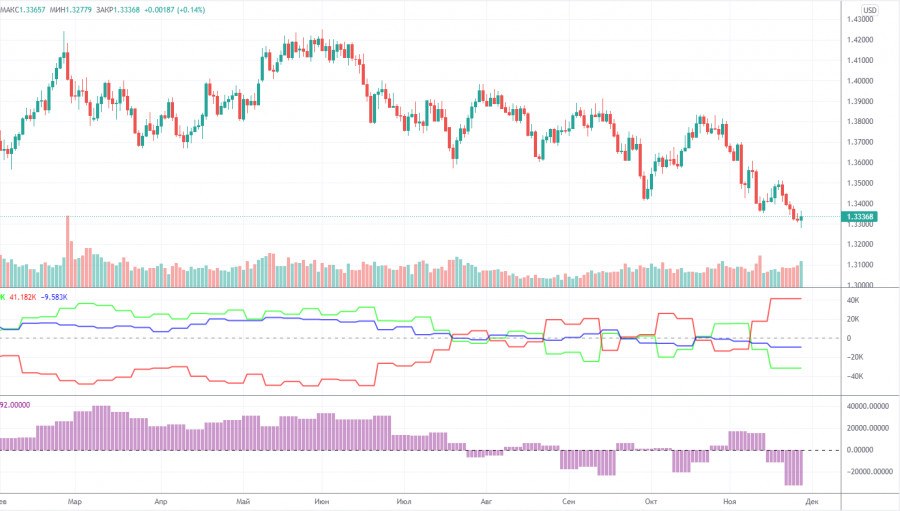 During the last reporting week (November 15-19), the mood of professional traders became much more "bearish". However, this should not be surprising, since the mood of major players has been constantly changing over the past few months, which perfectly reflects the first indicator in the illustration above. The green and red lines, which indicate the net positions (in other words, the mood) of non-commercial and commercial traders, constantly change the direction of movement and constantly change their position relative to the zero level. The last reporting week only confirmed these conclusions. The green line has dropped significantly again, and the red line has increased significantly, although a couple of weeks ago it was the opposite. Thus, formally, the mood of professional traders has become more "bearish", but in reality, it changes every couple of weeks, so it is impossible to make a long-term conclusion. During the reporting week, the Non-commercial group closed 4 thousand buy contracts and opened 17 thousand sell contracts. Thus, the net position decreased by 21 thousand contracts at once, which is a lot for the pound. However, this does not matter much, since the net position of non-commercial traders also constantly jumps up and down, which is eloquently signaled by the second indicator in the illustration above. It should also be noted that in the long term, the pound/dollar exchange rate itself also constantly jumps up and down. Thus, it is not possible to make a long-term forecast based on COT reports. The new COT report was not released on Friday, so we are waiting for it at the beginning of next week.

The current week has been very boring for the British currency. There was not a single important macroeconomic report during the week. There was not a single important fundamental event, although the Chairman of the Bank of England, Andrew Bailey, made a speech several times, but with the same success as Christine Lagarde. Reports on business activity in the service and manufacturing sectors can hardly be considered important in the current conditions. Thus, the pound continued to fall to a greater extent due to factors related to the dollar and America. But one cannot deny the harmful influence of the British fundamental background, which presents negative surprises almost every week.

Trading plan for the week of November 29 - December 3:

1) The pound/dollar pair continues its steady decline. Therefore, purchases are now impractical. To begin with, you need to wait until the pair is fixed above the critical line, or better - above the Ichimoku cloud. Since the price is now very far from these lines, it is unlikely that this will happen in the near future. On the lower timeframe, the pair may change the downward trend to an upward one, which may be the beginning of a round of upward movement on the 24-hour TF. We assume that the pair may go up 400-500 points in the next month or two. But so far there are no signals about the beginning of such a movement.

2) The bears managed to keep the pair below the Ichimoku cloud and now continue to develop their success. The support level of 1.3461 has been overcome, so the chances of further movement to the South are high, and the target is the support level of 1.3246. However, we should be careful: we still expect the formation of a new round of upward correction, based on the general nature of the pair's movement for the whole of 2021.

Interesting? Write a comment below.
 Trading plan for the GBP/USD pair for the week of November 29 - December 3. New COT (Commitments of Traders) report. The
Forward 
Backward 