Bitcoin (BTC) is trading around 59,817 with a bearish bias. On November 16, BTC broke sharply through the 21 SMA and the strong support at 2/8 murray.

On October 1, BTC was trading above the 21 SMA which was giving it a positive outlook. However, yesterday Bitcoin achieved a daily close below this moving average which could be a negative signal in the short term.

The government of China continues to put pressure on Bitcoin and the cryptocurrency market. The agency's spokesman, Meng Wei, criticized Bitcoin mining, claiming that it consumes a lot of energy and generates a lot of carbon emissions. The authorities are determined to eradicate mining. This could affect Bitcoin in the medium term. 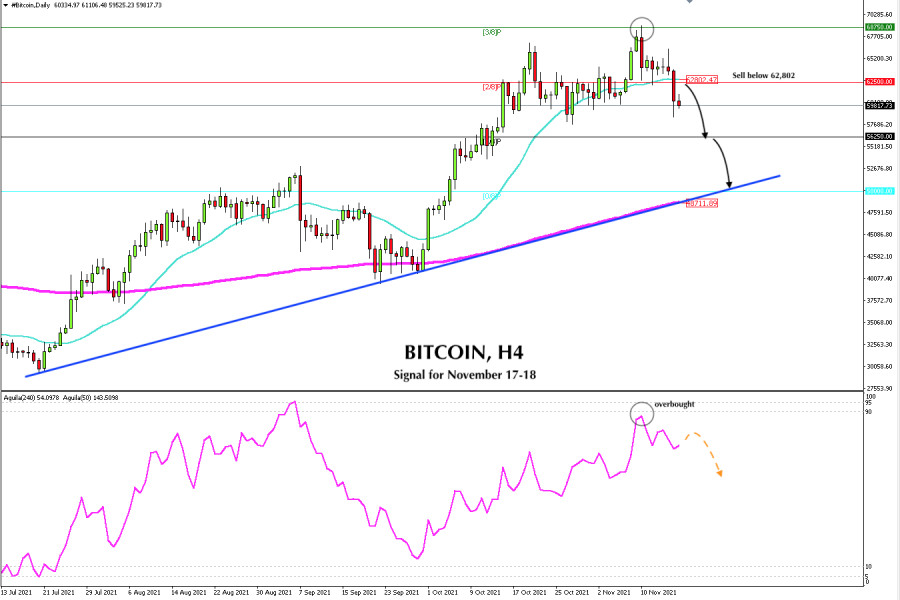 According to the daily chart, Bitcoin is very overbought now, and it is likely that the technical correction will continue in the coming days. If the downward pressure continues, it may fall to the psychological level of 50,000 located at the 0/8 murray around the 200 EMA.

The medium-term outlook for BTC remains positive despite the recent technical correction. Bitcoin hit a new all-time high of 68,959 last week, giving the bulls a chance to hit 75k in the coming weeks.

Investors believe that this decline is part of a technical correction for a new bullish wave that could reach the key level of 4/8 murray around 75,000 and up to 81,250 before the end of the year.

The eagle indicator is giving a negative signal and the downward movement is likely to continue in the next few days. BTC is expected to consolidate at key support around the psychological level of 50,000 and between the 200 EMA at 48,711.