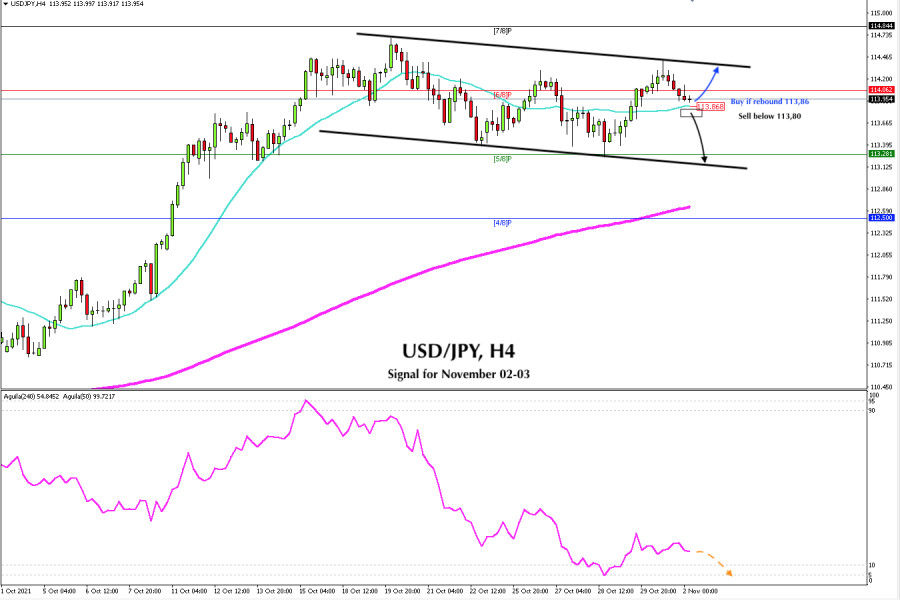 On October 15, USD/JPY hit a high of 114.69. Since then, the pair began a consolidation in a range of 100 pips. It has been oscillating within the downtrend channel for a while. USD/JPY is expected to continue its downward movement in the next few days up to the 200 EMA located at 112.60.

On the contrary, if the top of the bearish channel is breached, the pair could resume the main uptrend and could reach the level of 114.84 which is 7/8 of Murray, and up to the psychological level of 115.00.

The market sentiment report for today shows that there are 71.66% of traders who are selling the USD / JPY pair. This is a negative signal. If the pair rebounds off 113.86, a technical correction could occur in the short term up to the price level of March 2017 around 115.62. This is 8/8 of murray which represents strong resistance.

The eagle indicator reached oversold levels on October 28, having touched 5 points at the low of 113.28.Then it began a technical correction that took the price to the level of 114.46. Now the indicator continues to give a bearish signal, so USD/JPY is expected to fall again if it consolidates below 113.80.

There is strong resistance 114.06 where 6/8 of a murray is located. While the pair is below this level, it is likely to carry on trading with the bearish bias. Therefore, we should wait until this bearish movement is confirmed. If the price is trading below the 21 SMA, our target will be located at 113.45 and down to 113.28. If this level is broken, USD/JPY could fall to the 200 EMA around the 4/8 of murray at 112.60.

On November, 3 the Fed will announce its monetary policy decision. The US central bank is likely to announce reduction in monthly bond purchases. This policy move encourage the US dollar's advance. So, it could assert strength also against the yen. Besides, investors are convinced that the regulator will have to take drastic countermeasures to contain inflation that is accelerating month after month.

Our trading plan is to sell below 113.80. If the bearish move is confirmed, we could sell the pair with targets up to 113.12. On the contrary, if the Japanese yen continues to oscillate above the 21 moving average (113.80), there will be an opportunity to buy with targets at 114.30. If USD/JPY breaks the top of the downtrend channel, it could rise quickly to 7/8 around 114.84.