Analysis of trades and tips on trading the euro

Yesterday, there were several entry points. Trading was unfolding around the 1.1386 level as the pair remained flat before the start of the New York session. It tried to test 1.1368 at 11.00 when the MACD indicator was in the oversold area. The indicated level was not the daily high, so it was risky to open long positions. In the afternoon, the pair tested 1.1368 at 14.30 when the MACD indicator moved from top to bottom to zero, which was the first signal to sell the euro. Besides, the pair attempted to break through this level at 15.50. The MACD indicator was still just starting to move down from zero. As a result, the euro fell by about 40 pips. No other entry points were formed. 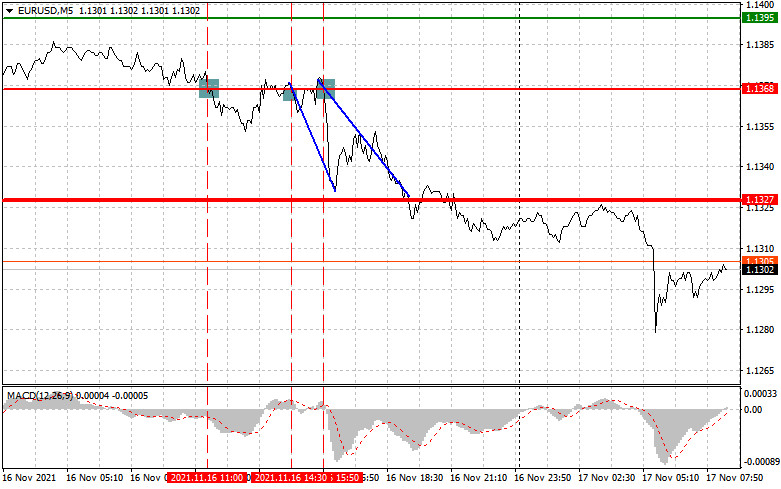 The euro advanced yesterday amid a batch of fundamental statistics in the first half of the day. Yet, the euro failed to sustain bullish momentum. The data on the consumer price index of Italy and France turned out to be positive. The Gross Domestic Product (GDP) in European Union was in line with economists' forecasts. The US dollar also rose in the afternoon following the retail trade report. The figure beat economists' forecasts. The speeches of FOMC members Rafael Bostic and Mary Daly only increased demand for the US dollar. They hinted at a rise in the interest rate.

Today, the economic calendar contains crucial economic reports as well. In the first half of the day, investors will be anticipating data on the EU consumer price index and the financial stability report. If inflation soars in October in the eurozone, then the euro is likely to assert strength against the US dollar within a day. In the second half of the day, several FOMC members will make a speech, namely John Williams and Christopher Waller as well as Mary Daly and Michelle Bowman. If they continue to hint at an increase in the interest rate, the US dollar will rise versus the euro. Apart from that, the US is going to unveil building permits data. If the reading is positive, the US currency is sure to climb.

Today, it is recommended to open long positions on the euro when the price reaches 1.1318 (the green line on the chart) with the target level of 1.1369. After the price approaches 1.1369, it is favorable to lock in profits, selling the euro and counting on a rebound of 10-15 pips. The euro may rise only in the case of very strong inflation data in the eurozone and the hawkish statements of ECB President, Christine Lagarde, on monetary policy. Important! Before opening long positions, make sure that the MACD indicator is above the zero level and is just beginning to climb from this level. It is also possible to buy the euro today if the price reaches 1.1294. The MACD indicator should be in the oversold area, which will limit the downward movement and lead to an upward reversal. So, the pair may rise to the opposite levels of 1.1318 and 1.1369.

It is recommended to open short positions on the euro after it approaches the level of 1.1294 (the red line on the chart). The target level will be 1.1254. After the price reaches this level, it is better to close short positions and buy the euro immediately counting on a movement of 10-15 pips in the opposite direction from the level. The euro may face pressure amid soft rhetoric from the ECB president and poor inflation data in the eurozone. The speeches of FOMC members may also give a boost to the US dollar. Important! Before opening short positions, make sure that the MACD indicator is below the zero level and is just beginning its decline from it. It is better to sell the euro today if the price reaches 1.1395. The MACD indicator should be in the overbought area, which will limit the upward movement and lead to a downward reversal. The euro may edge lower to 1.1368 and 1.1327. 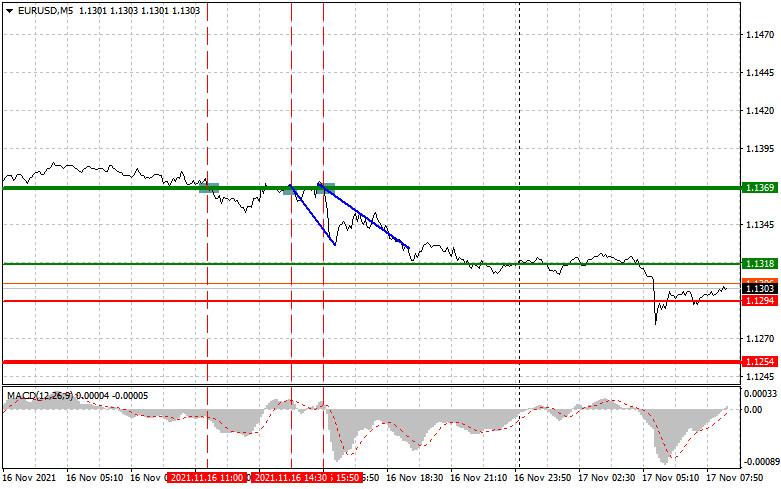 Description of the chart:

The thin green line is the entry point to open log positions.

The thick green line is the estimated price where you can place the Take Profit order or lock in profits by yourself as the price is unlikely to climb above this level.

The thin red line is the entry point to open short positions.

The thick red line is the estimated price where you can place the Take profit order or lock in profits by yourself as the price is unlikely to decline below this level.

The MACD indicator. When entering the market, it is important to study overbought and oversold zones.

Important. Novice traders need to make very careful decisions when entering the market. Before the release of important fundamental reports, it is best to stay out of the market to avoid losses because of sharp fluctuations in the exchange rate. If you decide to trade during the news release, then always place Stop Orders to minimize losses. Without placing Stop Orders, you may lose the entire deposit very quickly, especially if you do not use money management, but trade in large volumes.

Remember that for successful trading it is necessary to have a clear trading plan, following the example of the one presented above. Intraday traders are likely to incur losses by making spontaneous trading decisions based on the current market situation.