US dollar enters the upward course

The US Federal Reserve is starting to reduce monthly purchases by $ 15 billion, which means that the QE program will be completed by June 2022. Fed Chairman Powell said that the rate of decline can be adjusted if necessary. This issue, as well as the issue of rates, will be related to the results of the labor market recovery. So far, market expectations suggest 2 rate hikes next year, which provides the US dollar with an opportunity to strengthen against most G10 currencies, but, as it usually happens, not everything is as clear as it may seem.

It should be noted that the decision to start reducing QE is taken at an extremely unfortunate time, but it seems that the Fed has no other way out. The threat of uncontrolled inflation growth requires the cessation of emissions and tightening of financial conditions, while the situation in the US economy is developing according to a negative scenario. 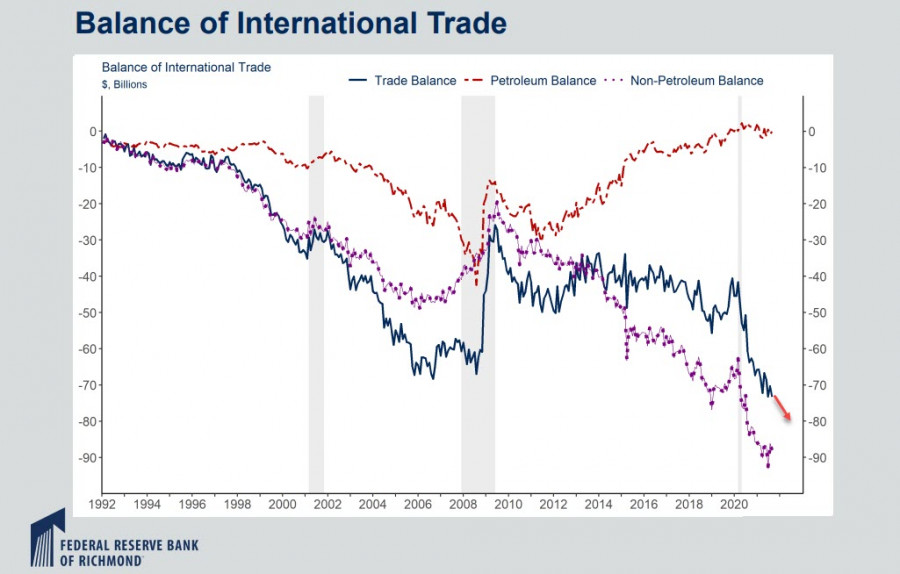 It is also worth noting that without considering oil and petroleum products, the trade deficit is approaching 100 billion. In fact, the US economy is kept afloat by the extractive industry, and without its contribution, a reduction in QE would be simply impossible.

Economic growth is under threat. In Q3, GDP growth is noticeably weaker than forecasts, especially amid the confident Q1 and Q2, that is, the reduction in QE occurs at a time when the temporary factors supporting the economy are weakening, and logistical problems are getting worse, which are increasingly putting pressure on the production cycle around the world. If consumption growth was 2.8% in the 2nd quarter, then in the 3rd quarter, it fell to 0.4%. The curtailment of support measures is quite capable of pushing consumption growth in the 4th quarter to negative values.

Recent surveys in the business environment show that the positive mood is weakening. And while the indicators remain at a high level, the momentum for growth has been completed, and this is even before the tightening of financial conditions. 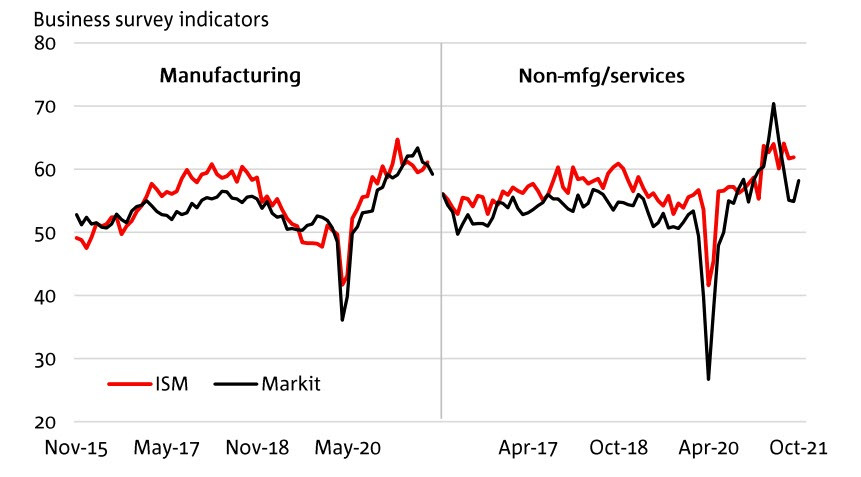 The savings rate remains high, households have also accumulated additional savings (above the pre-nominal levels), but high inflation undermines the purchasing power of households, and if it is more stable than expected, it will threaten consumption growth.

Accordingly, the Fed is forced to stop the threat of high inflation even amid the weakening economic growth. This is the main risk for the US economy at the moment, and for the US dollar as the main world currency, the rise in inflation has many reasons, and QE is far from the only one.

Disruptions in global supply chains lead to a shortage of goods. At the same time, the labor market has not recovered, despite the fact that wage growth rates in September amounted to 4.6%, and according to forecasts, it will rise to 4.8% in October.

Therefore, today's employment report will allow us to adjust long-term expectations for the dollar. A good pace of labor market recovery will increase market expectations for the rate, which will almost inevitably lead to an increase in the dollar index. In turn, weak data (if less than 400 thousand new jobs are created) will lead to an increase in demand for protective assets, since they will mean an increase in the likelihood of events developing in the US economy according to a stagflationary scenario.

OPEC+'s decision not to increase production beyond the previously planned 400 thousand barrels. a month will allow to maintain high oil prices. A small pullback today is most likely associated with profit-taking. This factor will support the US dollar in the long run.

In general, it should be assumed that global economic growth is slowing down, which will lead to an increase in demand for protective assets. In this case, the US dollar will strengthen.