Analysis and trading tips for EUR/USD on December 6

Market signals during the start of Friday's European session said to sell, but since the MACD line was so far below zero, few traders took short positions, resulting in a little downward movement. Then, some time later, a signal to buy appeared, and this time it provoked a 10-pip increase even though the MACD indicator was in the overbought area. The pair rose again immediately after that, which led to another signal to sell. This, however, brought losses as the data on the US labor market came out worse than anticipated. Subsequent signals occurred when the MACD indicator was in the overbought area, developing the second scenario presented last Friday. 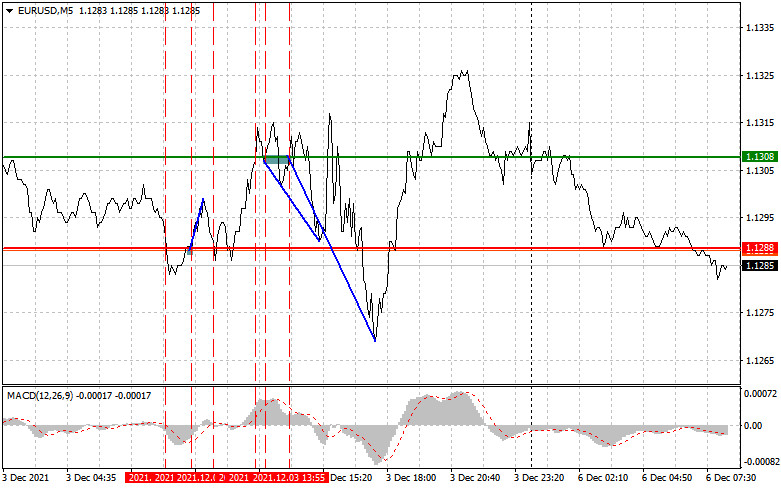 Demand for euro decreased because the latest PMI data of eurozone countries showed a slowdown amid another outbreak caused by the new strain of coronavirus. Meanwhile, the report on retail sales and speech of ECB board member Philip Lane were ignored by traders as everyone was waiting for the latest US NFP report last Friday. Since the figure disappointed traders, many believe that the Fed will maintain a dovish stance on the upcoming policy meeting next week.

Today, the market will depend on the change in the volume of orders in Germany and the volume of retail trade in Italy. Strong performances will result in a rally, but only in the morning because upon the release of Sentix 'investor confidence report, pressure on the euro may return, which will lead to a sharp decline in EUR / USD.

Buy euro when the quote reaches 1.1299 (green line on the chart) and take profit at the price of 1.1343. Demand will increase if statistics in the Euro area exceed expectations. But growth will be limited by possible problems with the new coronavirus strain.

Before buying, make sure that the MACD line is above zero, or is starting to rise from it. It is also possible to buy at 1.1280, but the MACD line should be in the oversold area, as only by that will the market reverse to 1.1299 and 1.1343.

Sell euro when the quote reaches 1.1280 (red line on the chart) and take profit at the price of 1.1250. Weak data on the eurozone will provoke a decrease in EUR / USD.

Before selling, make sure that the MACD line is below zero, or is starting to move down from it. Euro could also be sold at 1.1299, but the MACD line should be in the overbought area, as only by that will the market reverse to 1.1280 and 1.1250.