Analysis of GBP/USD. December 14. The pandemic is gaining momentum in the United Kingdom. 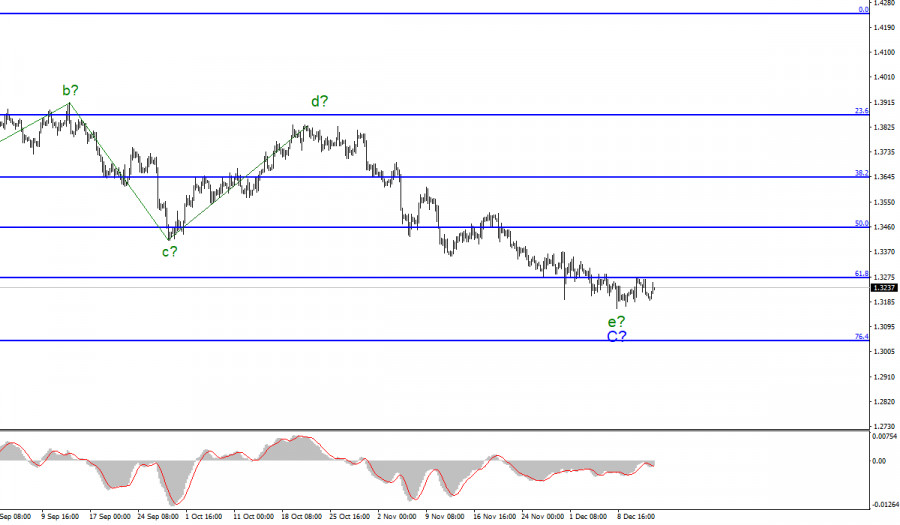 According to the pound/dollar instrument, the wave marking continues to look quite complicated, but at the same time quite convincing. If the current wave pattern is correct, then now the construction of the last wave in the composition of C. A very weak increase in the quotes of the instrument in recent days suggests to me that the wave e-C may take a longer form than I expected earlier, but at the same time, it is high time for it to end. Unfortunately, the news background now remains not on the side of the pound sterling. It is very difficult to say what it will be like after the Bank of England and the Fed announced the results of the meetings. The departure of quotes from the reached lows can be interpreted as the completion of the wave e-C, but the increase in the instrument is still too weak to make such a loud conclusion. An unsuccessful attempt to break through the 1.3271 mark indicates that the markets are not ready to buy at this time. The pound's only hope is that the Bank of England will be more "hawkish" than it seems now.

The number of cases is growing in the UK and without Omicron.

The exchange rate of the pound/dollar instrument during Tuesday first increased by 40-50 basis points. However, if the markets pay attention to the news background as they have done in recent weeks, then the British dollar may continue its decline. In the UK, there is again an increase in cases of coronavirus. So far, we are talking about a wave of diseases with the Delta strain, however, the Omicron strain is already on the way. According to the Minister of Health Sajid Javid, in London, up to 40% of cases can be infected with Omicron. Boris Johnson has tightened quarantine measures since Monday and urged everyone who has not yet been vaccinated to get vaccinated. He also promised that in the near future a third vaccination will be available to all Britons, which should significantly reduce the risk of infection with Omicron or at least reduce the likelihood of complications of the course of the disease. Meanwhile, the Johns Hopkins website indicates that more than 300,000 people are infected every week in the UK. And this figure is growing. In the coming weeks, it may exceed the peak of the third wave, which falls in January of this year. This means not only that vaccines may reduce the number of hospitalizations, but do not stop the spread of the virus itself, but also that the British economy may experience a new shock. So far, Boris Johnson refuses to introduce quarantine, as some European countries have done. But if the situation worsens, the opposition will put pressure on him and force him to declare a "lockdown". And this will be another test for the economy. The British pound on all this news may continue to decline in tandem with the US currency.

The wave pattern of the pound/dollar instrument looks quite convincing now. The supposed wave e could have completed its construction, but there are still doubts about this. Thus, now I would advise you to wait for a successful attempt to break through the 1.3271 mark, which is equal to 61.8% by Fibonacci, and then gradually buy the instrument. 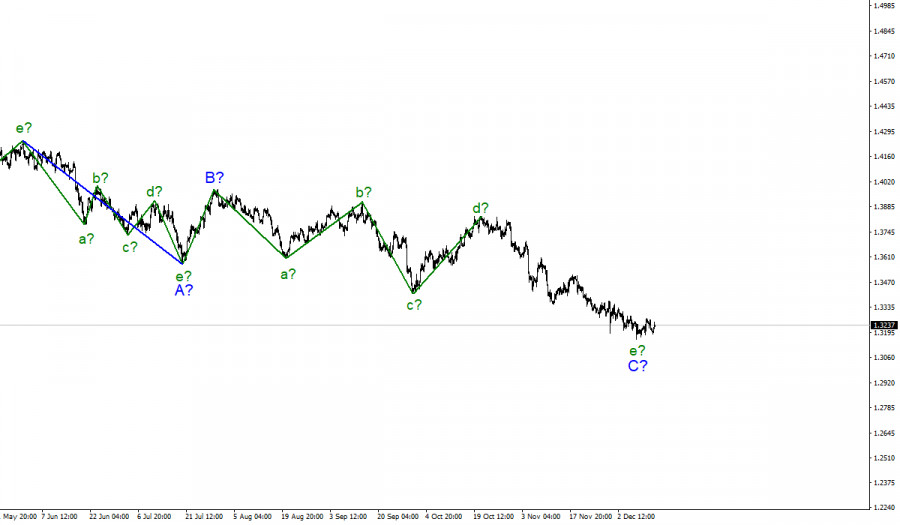 Starting from January 6, the construction of a downward trend section continues, which can turn out to be almost any size and any length. At this time, the proposed wave C may be nearing its completion (or completed), but there is no unambiguous confirmation of this yet. The entire downward section of the trend may lengthen more than once.

Interesting? Write a comment below.
 Analysis of GBP/USD. December 14. The pandemic is gaining momentum in the United Kingdom.
Forward 
Backward 