Analysis of GBP/USD on December 11. Goldman Sachs does not believe in a rate hike by the Bank of England. 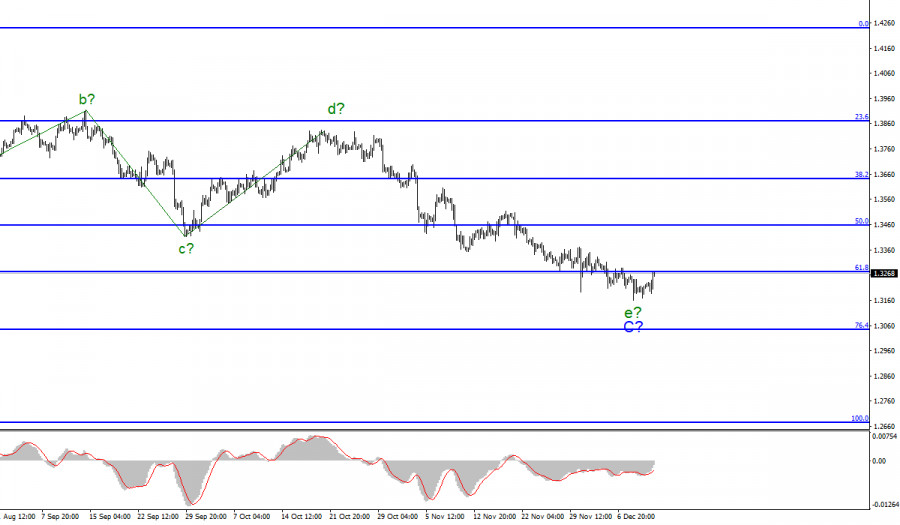 Wave pattern.
For the pound/dollar instrument, the wave marking continues to look quite complicated, but at the same time quite convincing. If the current wave pattern is correct, then now the construction of the last wave in the composition of C. The decline in the quotes of the British dollar in recent days leads me to think that the wave e-C may take a longer form than I expected earlier, but at the same time, it is time for it to end. Unfortunately, the news background is not on the side of the pound sterling right now, and the markets may continue to increase demand for the dollar. The departure of quotes from the lows reached on Friday can be interpreted as the completion of the wave e-C, but the increase in the instrument is still too small to make such a loud conclusion. I am waiting for the EUR/USD instrument to build another downward wave, so the GBP/USD instrument can continue building an elongated wave e at this time. It would be ideal if both instruments completed the construction of their downward trend sections at the same time.
The market has been expecting a rate hike from the Bank of England for some time, but it is no longer waiting.
The exchange rate of the pound/dollar instrument increased by 50 basis points during Friday. At the moment, the instrument has made an unsuccessful attempt to break through the 1.3271 mark, which corresponds to 61.8% Fibonacci. To be more precise, on Friday evening, it had just reached this mark and had not yet had time to test it. Thus, a successful breakout attempt will assure me that the downward trend section is indeed completed. Unsuccessful – will lead to a new complication of the descending section. Next week, not only the ECB and the Fed will hold meetings. The Bank of England will not stand aside either. A month ago, it unexpectedly made it clear to the markets that it could tighten monetary policy in the coming months. Even in December. However, the events of recent weeks have forced analysts to revise their forecasts. A new wave of the epidemic continues to gain strength in the UK, and a wave of the omicron strain is beginning to gain momentum around the world. Precisely because of the uncertainty with the new strain, the Bank of England is likely to postpone the decision to raise the rate until February. Goldman Sachs experts think so. In February, the Bank of England may raise the rate by 15 basis points. Earlier, analysts at Barclays and JPMorgan made a similar conclusion. Thus, next week the British regulator may take a neutral and wait-and-see position. This Friday, reports on GDP and industrial production in the UK turned out to be weaker than market expectations, which may be an additional factor in postponing tightening to a later date. And if so, then the Briton loses this factor of the news background, which could support him. The only hope now is for wave marking.
General conclusions
The wave pattern of the pound/dollar instrument looks quite convincing now. The supposed wave e could have completed its construction, but there are still doubts about this. Thus, now I would advise you to wait for a successful attempt to break through the 1.3271 mark, which is equal to 61.8% by Fibonacci, and then gradually buy the instrument. 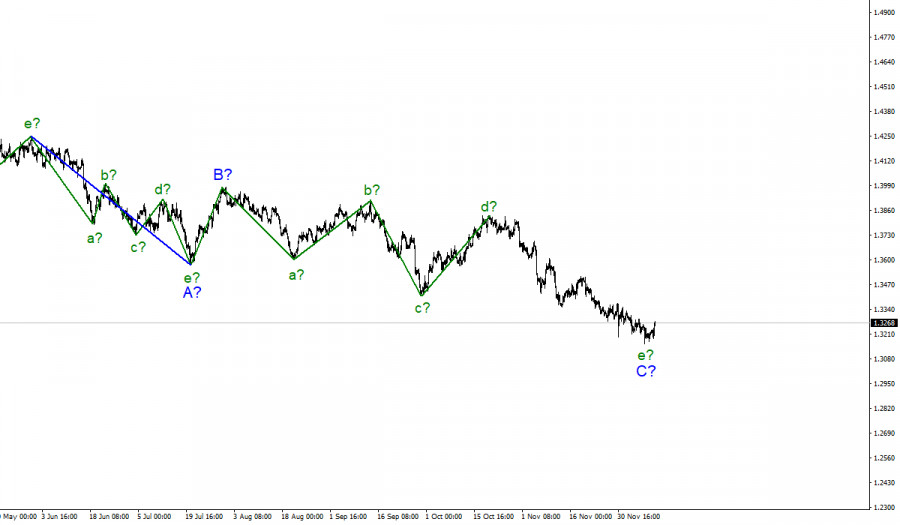 Senior schedule.
Starting from January 6, the construction of a downward trend section continues, which can turn out to be almost any size and any length. At this time, the proposed wave C may be nearing its completion (or completed), but there is no unambiguous confirmation of this yet. The entire downward section of the trend may lengthen more than once.
The material has been provided by InstaForex Company - www.instaforex.com

Interesting? Write a comment below.
 Analysis of GBP/USD on December 11. Goldman Sachs does not believe in a rate hike by the Bank of England.
Forward 
Backward 