Analysis of the trading week of December 6-10 for the GBP/USD pair. New COT (Commitments of Traders) report. A perfect technical 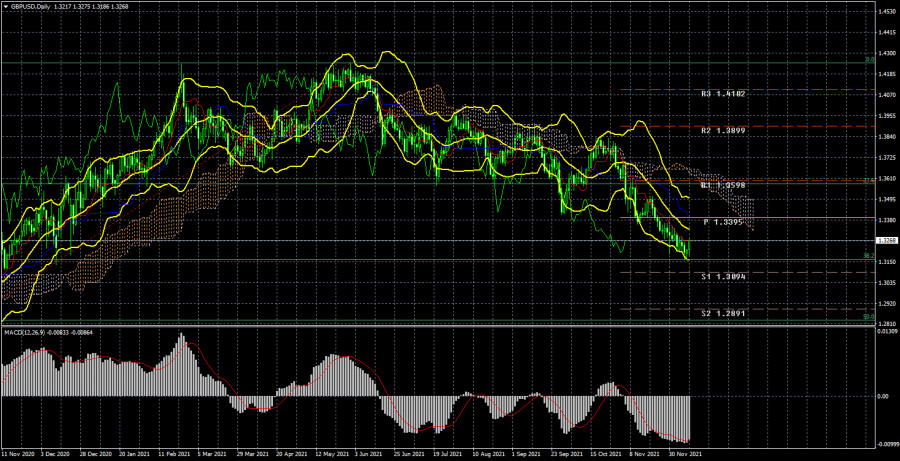 The GBP/USD currency pair has worked out the 1.3162 level during the current week, which is an important 38.2% Fibonacci level. Thus, a rebound from this level was very likely in any case. And it happened. Now the pair will try to show a more or less strong correction. However, both pairs have obvious problems with the correction. Both are adjusted very reluctantly and very strained. Therefore, the pound/dollar pair now has chances to grow towards the critical Kijun-sen line, but at the same time, if the downward movement resumes on Monday, we will not be surprised at all. On the one hand, the pound, like the euro, is in decline for most of 2021. And this fall can still be interpreted as a correction against the global upward trend. Actually, at the moment, the pair has managed to adjust by only 38.2%. However, the fundamental background may continue to force traders to sell the pound and buy the dollar. Recall that in recent weeks, extremely unpleasant reports and news have been received from the UK. First the "fuel" crisis, then the "logistics" crisis, then the conflict over the "Northern Ireland protocol" with the European Union, then the conflicts with France on the "fish" issue and illegal migration. To top it all off, Boris Johnson got into a corruption scandal and a Christmas party scandal last year. Thus, all these factors do not contribute to the growth of the British currency. In addition, the pressure on the pair continues to be exerted by the fact that the Fed is ready to continue to wind down the QE program, and immediately after its completion – to start raising the key rate. The Bank of England, which showed in November that it could also raise the rate and start curtailing QE, may abandon these plans in December due to a new strong "wave" of the pandemic in the UK. 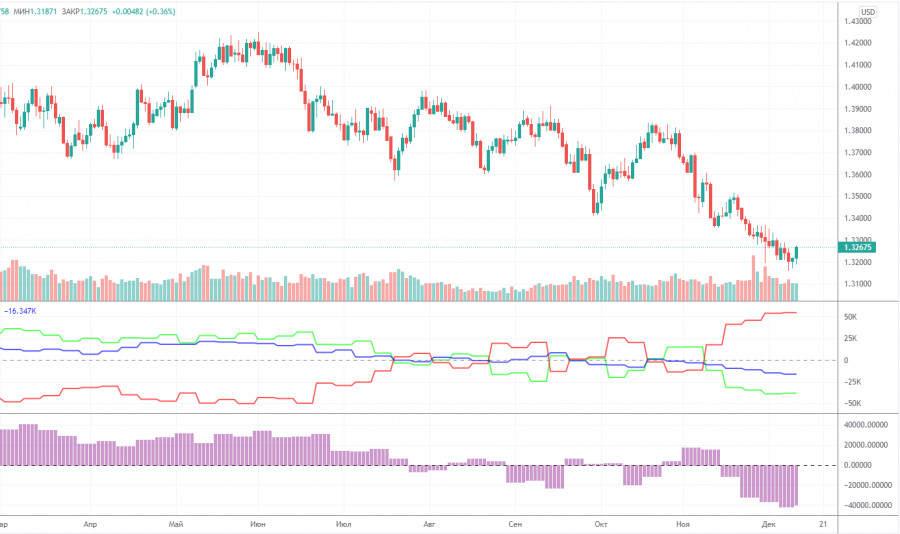 During the last reporting week, the mood of professional traders became a little less "bearish". Professional traders closed 3.6 thousand contracts for sale and 2.1 thousand contracts for purchase during the week. Thus, the net position for the "Non-commercial" group of traders increased by 1.5 thousand contracts. This is a very small change even for the British pound. In general, the mood of non-commercial traders continues to be "bearish", and quite strong. We draw the attention of traders to how low the green line of the first indicator is located in the illustration above, which reflects the net position of the "Non-commercial" group. Thus, unlike the European currency, the fall of the pound sterling in recent weeks looks just logical: major players sell off the currency, and it falls. A further fall in the British currency is also now quite likely, but at the same time, we draw the attention of traders to the fact that the green and red lines of the first indicator have moved quite far from each other. This may indicate that the downward trend is drying up. Thus, we get a situation in which the euro currency is not moving down quite logically, and the pound sterling may complete its movement in the near future. Thus, for both major pairs, we recommend waiting for the downward trend to end, but do not start buying until specific buy signals are formed.

There is an extremely small amount of important news and events in the UK this week. Only on Friday, a report on GDP was published, which turned out to be significantly weaker than forecasts, as well as a report on industrial production, which also fell short of forecasts. However, despite these disastrous statistics, at the end of the day, the pound rose in price, although in the first half of Friday it was still declining. However, the report on American inflation quite unexpectedly provoked a drop in the dollar. It seems that the markets no longer consider the growth of inflation in the States as a factor in accelerating the pace of curtailing the QE program or faster rate hikes. Or maybe the downtrend is just nearing its end since the growth factors of the dollar have already been played out several times. Anyway, so far we are talking only about a correction, which may later turn into an upward trend.

Trading plan for the week of December 13-17:

1) The pound/dollar pair maintains a downward trend. Therefore, purchases are still not relevant now. We need to wait for the pair to consolidate above the critical line, or even better - above the Ichimoku cloud. We still assume that the pair may go up 400-500 points in the coming month. But a lot next week will depend on the outcome of the meeting of the Fed and the Bank of England. The fundamental background will be very strong, which we will talk about in the following articles, and the British pound will count on support from the Bank of England.

2) Bears continue to hold the pair below the critical line. The targets for further movement to the South are now the support levels of 1.3094 and 1.2891. However, at least a small upward correction should take place first. If the pair's quotes bounce off the critical line, this may trigger a resumption of the downtrend with the specified goals.

Interesting? Write a comment below.
 Analysis of the trading week of December 6-10 for the GBP/USD pair. New COT (Commitments of Traders) report. A perfect technical
Forward 
Backward 