Dow and S&P 500 opened the US market higher

The Dow and S&P 500 opened the session on Thursday with an increase due to the weight gain of shares of aircraft manufacturer Boeing and travel companies, although the increase in the number of cases of a new variant of the Omicron coronavirus worldwide continues to "nightmare" the markets.

Boeing Co jumped 5.3% in the premarket immediately after the Aviation Administration of China issued a directive on the airworthiness of the 737 MAX, which will help return this model to service in China - after two and a half years. 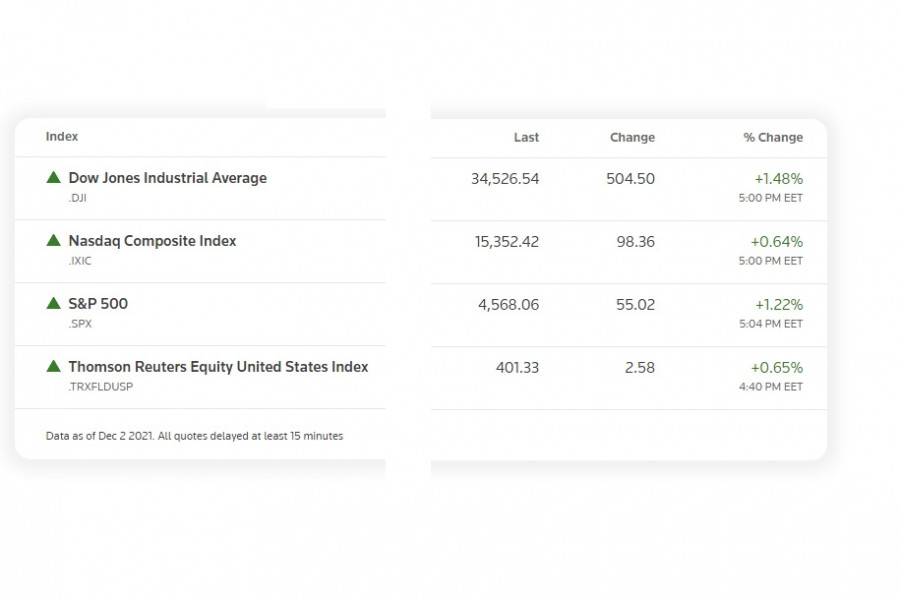 Alas, the traders' estimate for a safe haven in the technology sector did not come true: reducing the overall background of the Nasdaq, Apple Inc shares fell by 3.1%, and shares of suppliers Qualcomm, Skyworks and Qorvo fell by 2.5-3.2%. This was a consequence of the publication of Bloomberg news about the slowdown in demand for Apple's iPhone 13.

The day before, the S&P 500 and Nasdaq closed below their 50-day moving average, while the Dow broke through the 200-day moving average for the first time since July 2020. Experts believe that the reason is the growing concern of investors about the latest version of the coronavirus and the hawkish comments of the Federal Reserve. As a result, investors began to redirect financial flows from the startup sector to companies with strong liquidity and dividend payments.

The United States and Germany have joined countries around the world planning stricter restrictions on COVID-19 as the Omicron variant has rattled markets, fearing it could stifle a tentative post-pandemic economic recovery.

Market participants are already concerned about supply chain congestion and the faster return of global central banks to a pre-pandemic monetary policy to overcome rising price pressures, especially in the US.

While lawmakers are doing their best to avoid a partial government shutdown this weekend, Omicron has ended up in the United States. Now a new strain has been added to the causes of their headaches. And this makes the markets panic.

"This is something like a tendency to buy on the decline," said analyst Sam Stovall from New York. "Uncertainty will persist for the next week or so until scientists conduct more research on the new option. I still believe that investors want to focus on stocks, they just need to be given a reason to do so," he says, referring to the trend of outflow of funds from the capitalization sector that emerged a week ago.

The trading week turned out to be hot, as investors seemed to struggle for deals after each drawdown. And yet, after all the efforts of Wall Street, the three most important indexes sank.

Despite the losses, thanks to the previous brilliant profit and loss reports, as well as strong economic growth, US stocks reached a number of record highs in November: this year the S&P 500 index rose by 20.1%.

A survey of analysts showed that a correction is likely in the next six months. In general, it is expected that the benchmark will grow by 7.5% in the period up to the end of 2022 and will end at the level of 4910.

Among other securities, Delta Air Lines shares rose by 1.8%. Shares of major oil companies ExxonMobil and Chevron Corp rose by 1.0% and 1.5%, respectively, tracking oil prices. Bank of America showed the largest growth among comparable companies, adding 1.1%. The shares of cruise operators are growing after the correction the day before. Facebook shares have moved sharply down after yesterday's congressional hearings on documents provided by Haugen,