EUR/USD analysis on December 17. The week ended without the advantage of the euro currency. 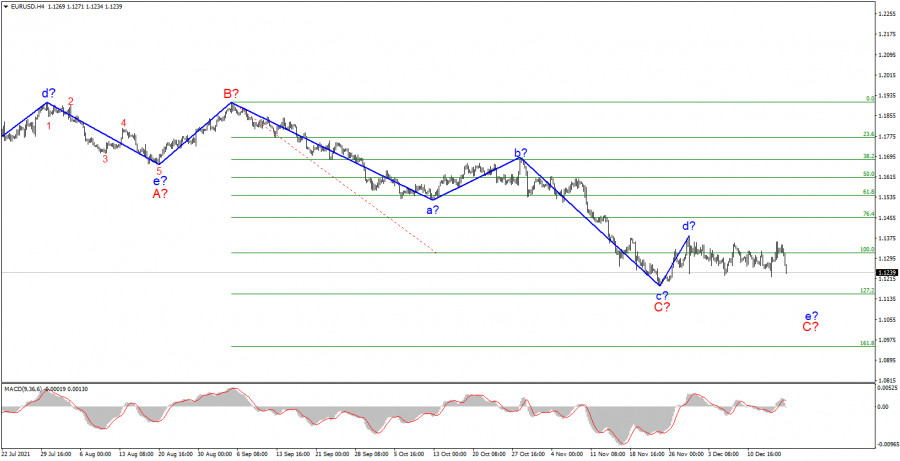 The wave marking of the 4-hour chart for the euro/dollar instrument continues to remain integral and does not require additions. The construction of a descending wave e-C is still questionable, although yesterday's decline in the quotes of the instrument may mean a transition to the construction of this wave. But if this wave does not continue its construction, then wave C will have to be recognized as three-wave and completed. It seems that it should take a five-waveform after all. The wave that originates on November 30 cannot be attributed now either to wave C or to the first wave of a new upward trend segment, if it really is, since neither the peak of wave d-C nor the low of wave c-C have been broken so far. The movement of the instrument is almost horizontal and in the current situation it remains only to wait for the development of the situation. I believe that the euro/dollar and pound/dollar instruments can start building an upward trend section at the same time, but for this you need to determine the wave pattern of the euro currency, since everything looks more or less convincing for the British.

The results of the meetings of the central banks did not quite lead to that movement.

The news background for the EUR/USD instrument on Wednesday and Thursday was very strong, and on Friday it was practically absent. During the entire last day of the week, only the inflation report in the European Union can be noted. However, it had no effect on the instrument, since the markets were acquainted with its value a couple of weeks ago. The consumer price index rose in Europe to 4.9% in November. There was no more news during the day, so the amplitude of 20 basis points would have looked logical if not for a drop of 100 points in the afternoon. If you look at the entire movement of the instrument during the week, you will not even immediately say that many important events took place during this period. The tool went up by 130 points and down by the same amount, but in general it moved more horizontally. In the picture above, this is perfectly noticeable. And horizontal movement does not make it possible to make an unambiguous conclusion about its belonging to any particular wave and trend area. The Fed and the ECB made important decisions, and the euro currency first received market support, and then the dollar. In general, I want to say that the reaction of the markets to the meetings of central banks turned out to be quite strange and did not clarify anything in the wave markup, but rather confused it even more. Thus, in the current situation, it remains only to wait for developments. The year 2021 is coming to an end and market activity may decline in the next two weeks. Therefore, the wave marking can only become more complicated at this time.

Based on the analysis, I conclude that the construction of the descending wave C can be completed. However, the internal wave structure of this wave still allows the construction of another downward, internal wave. Thus, I advise selling the instrument with targets located around the 1.1152 mark, for each MACD signal "down", until a successful attempt to break the peak of wave d. 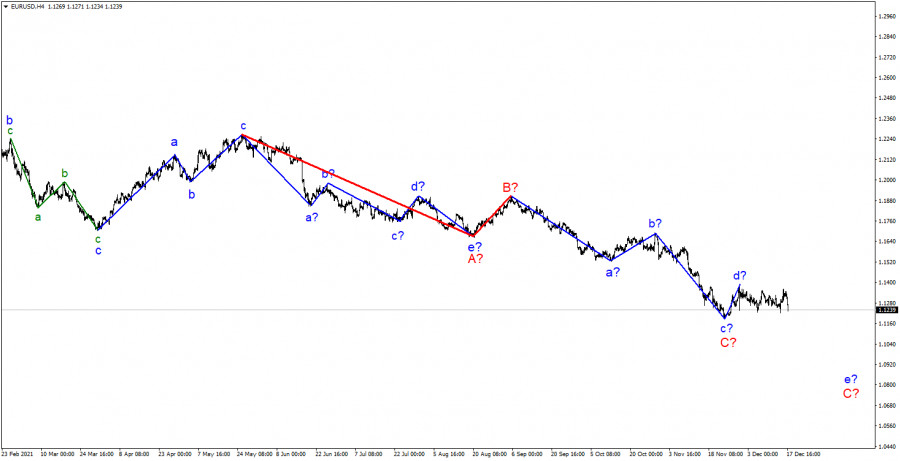 Interesting? Write a comment below.
 EUR/USD analysis on December 17. The week ended without the advantage of the euro currency.
Forward 
Backward 