EUR/USD analysis on December 8. A new default in the US is a week away. 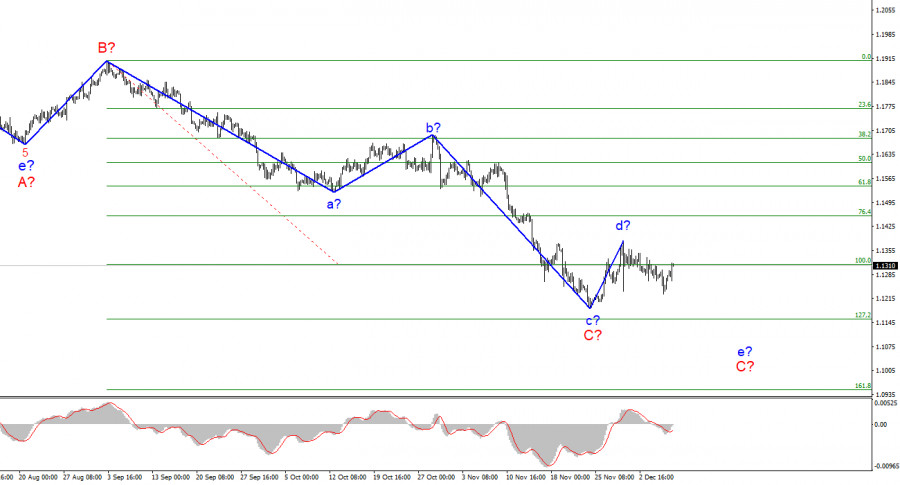 The wave marking of the 4-hour chart for the euro/dollar instrument continues to remain integral and does not require any changes. At this time, the construction of the proposed wave C is continuing, which is likely to take a five-wave form. Presumably, the construction of an upward wave d and C. And, if the current wave marking is correct, the internal wave e and C is being built now, and a successful attempt to break through the 100.0% Fibonacci level indicates the readiness of the markets for new sales of the instrument. Thus, the decline of the instrument may continue this week with targets located near the estimated mark of 1.1152, which is equivalent to 127.2% by Fibonacci, where the entire trend section can complete its construction. I also draw attention to the fact that wave C still takes a corrective form. And the entire downward section of the trend, which originates in January 2021, may take not a three-wave, but a five-wave form A-B-C-D-E. However, this will need to be discussed when at least wave C completes its construction.

The news background for the EUR/USD instrument on Wednesday turned out to be very weak again. In the morning, the European Central Bank President Christine Lagarde and her deputy Luis de Guindos made speeches in the European Union. Both officials said that inflation may continue to rise longer than previously expected, and inflationary pressures remain more serious compared to forecasts. It is difficult for me to say that it is based on these statements that the demand for the European currency increased slightly during Wednesday. This is probably not the case. There may also be corrective waves inside the assumed wave e and C, which do not have to coincide with the corresponding news background. Thus, the increase in the quotes of the instrument on Wednesday may be a pure coincidence. There was not a single important event or report in America on this day. But the lower house of the US Congress approved an increase in the national debt ceiling. Janet Yellen has repeatedly stated over the past month that the Treasury will have enough funds until December 15. Further, a default may follow any day if the Ministry of Finance is unable to pay its bills or make the necessary payments, which will lead to a serious blow to reputation and irreversible consequences for the economy. Now the US Senate, in which seats are equally distributed between Democrats and Republicans, must approve an increase in the "ceiling", but this requires two or three votes, not half. Democrats can bypass this requirement, but for this, they will have to pass another law that will allow them to vote for raising the limit by a simple majority.

Based on the analysis, I conclude that the construction of the descending wave C can be completed. However, the internal wave structure of this wave inclines me more to the opinion that another descending wave e will be built. Thus, I advise selling the instrument with targets located around the 1.1152 mark, for each MACD signal "down". 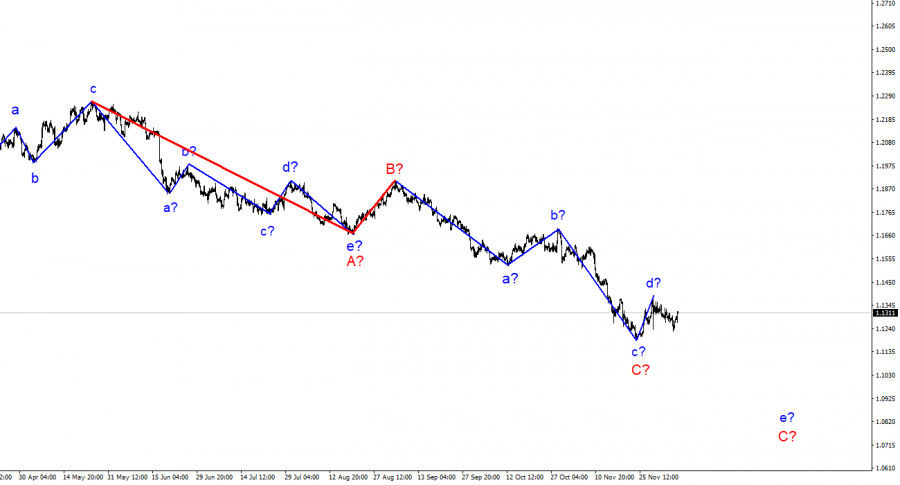 Interesting? Write a comment below.
 EUR/USD analysis on December 8. A new default in the US is a week away.
Forward 
Backward 