EUR/USD: plan for the European session on December 2. COT reports. Euro is stuck in a channel, but bears are aiming for a

Yesterday was not the best day for trading the euro. The generated signals did not bring profit. Let's take a look at the 5 minute chart and see what happened. In my morning forecast, I paid attention to 1.1340, however, as you can see, after its breakthrough, the reverse test from top to bottom led to the bears regaining control over the market. The bulls failed to catch on to the level and protect it. For this reason, I did not enter long positions during the upward correction of the pair. The bears made a false breakout at 1.1340 in the afternoon, which provided a signal to sell the euro, but the downward movement did not take place. Bulls have already tried to protect this level after the breakthrough and consolidation above 1.1340. The test from top to bottom provided an entry point to long positions, but after a 10-point rally, the bulls' initiative quickly evaporated, and the pressure on the pair returned. 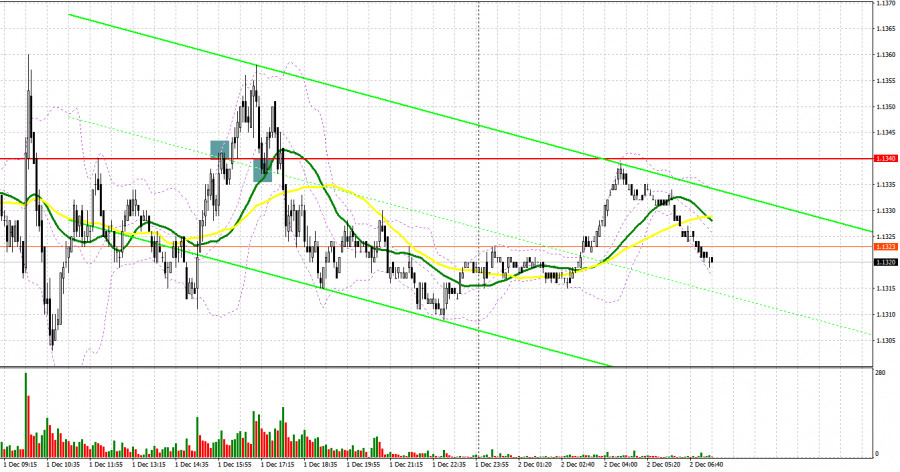 Data on the eurozone producer price index will be released today, which will certainly be higher than economists' forecasts, which may return demand for the euro. Also there is a report on the unemployment rate of the euro area for October this year, which is not of particular interest to traders. The technical picture marginally changed for the first half of the day. It is very important for the bulls to protect the nearest support of 1.1305, as the further upward correction of the pair depends on it. Only the formation of a false breakout there, together with good statistics on producer prices and the unemployment rate, will lead to the formation of the first point of entry into the market. The calculation will be on the continued growth of the pair and the breakthrough of the resistance of 1.1355, formed at the end of yesterday. A breakthrough and a downward test of 1.1355, by analogy with what I analyzed above relative to the level of 1.1340, will provide an excellent entry point to the market with the prospect of a renewal of the 1.1395 high and an exit at 1.1442. The next target will be 1.1514, where I recommend taking profit. In case EUR/USD falls to 1.1305 and we receive weak fundamental statistics for the eurozone, it is best not to rush to buy. I advise you to wait for the next fall in the pair and the formation of a false breakout at the intermediate support at 1.1274, but you can open long positions in EUR/USD immediately on a rebound from 1.1238, which acts as the lower border of a wider horizontal channel. The calculation will be for a correction of 15-20 points within the day.

The bears are not yet pushing to the limit and are not letting the pair go above the important resistance level of 1.1355. The main task for today is to protect this range. A false breakout there, coupled with weak eurozone inflation data for October this year, will provide an excellent entry point for short positions in anticipation of renewed bearish momentum seen this Tuesday after the speech of Federal Reserve Chairman Jerome Powell. The new coronavirus strain will also limit the pair's upward potential. Any news of another rapid spread will bring pressure back on the euro. An equally important task for the EUR/USD bears is to regain control over the support at 1.1305, which was not done yesterday. Its breakdown and a test from the bottom up will lead to the formation of a signal to open short positions with the prospect of a decline to the 1.1274 area. The next target will be the support at 1.1238, where I recommend taking profit. If the euro grows and the bears are not active at 1.1355, it is better to wait with short positions. The optimal scenario will be short positions when a false breakout is formed around 1.1395. You can open short positions immediately on a rebound from the highs: 1.1442 and 1.1514, counting on a downward correction of 15-20 points. 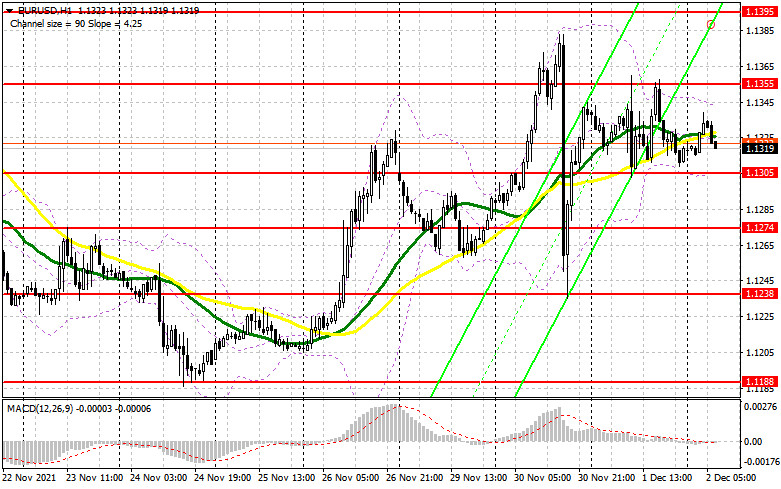 The Commitment of Traders (COT) report for November 23 revealed that both short and long positions increased. However, there are still more of the former, which led to an increase in the negative delta. The data on activity in the manufacturing sector of the eurozone countries provided significant support to the euro last week, but the pressure on risky assets remained. A strong US GDP report and Federal Reserve minutes from its last meeting have boosted the dollar as many traders look forward to more aggressive monetary policy changes as early as December this year. However, all this can be prevented by the new strain of the Omicron coronavirus, the spread of which is actively observed in the eurozone and African countries. This strain has not yet been registered in the US, but it is only a matter of time. Bulls can only wait for hawkish statements from European politicians, which were actively sounded last week, which also supported the euro. The latest November COT report indicated that long non-commercial positions rose from 198,181 to 204,214, while short non-commercial positions also jumped from 202,007 to 220,666. At the end of the week, the total non-commercial net position increased to -16,452 against -3,826. The weekly closing price dropped to 1.1241 against 1.1367.

Trading is carried out in the area of 30 and 50 day moving averages, which indicates the sideways nature of the market.

Interesting? Write a comment below.
 but bears are aiming for a, EUR/USD: plan for the European session on December 2. COT reports. Euro is stuck in a channel
Forward 
Backward 