EUR/USD: plan for the European session on December 10. COT reports. Euro pressure returns ahead of key US Inflation report

Yesterday was a rather interesting trading day, as a result of which several excellent points of entry to the market were formed. Let's take a look at the 5 minute chart and figure it out. In my morning forecast, I paid attention to the 1.1321 level and advised you to make decisions on entering the market. As a result of the absence of important fundamental statistics, and the data on Germany did not lead to a serious surge in volatility, the euro bulls focused on protecting the support at 1.1321. Forming a false breakout at this level led to a good signal to open long positions in continuation of the upward trend observed yesterday. However, as we already know, there was no major growth from this level, and in the afternoon the trade moved below 1.1321. Several unsuccessful attempts to get higher only resulted in forming a signal to sell the euro. As a result, the drop was about 40 points. Today the technical picture has completely changed. What were the signals for the pound? 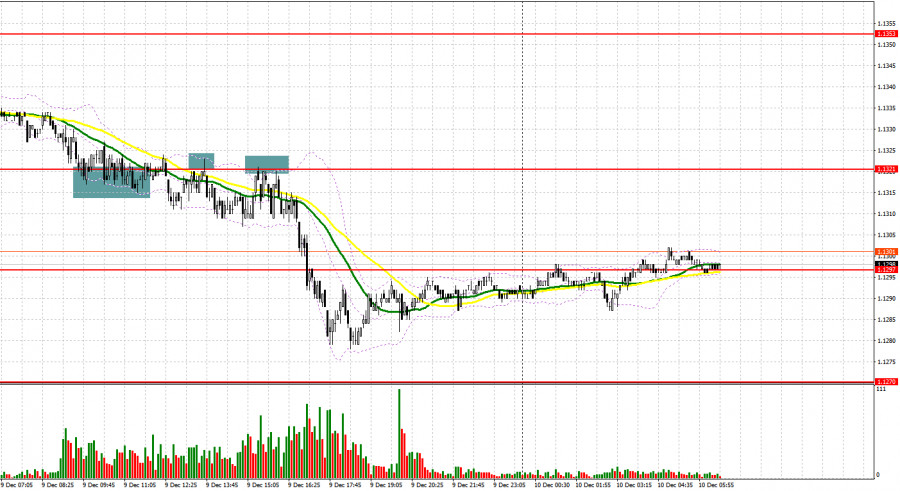 Today the focus will shift to US inflation data, which will set the market direction at the end of the week. However, before the release of a number of reports on the European economy. One of them will be the German consumer price index, which may decline for the second month in a row, confirming the slowdown in the leading European economy later this year. The speech of European Central Bank President Christine Lagarde will be very important today, who in her speech may touch upon the topic of monetary policy, thereby preparing the markets for the meeting, which will take place next week. The hawkish statements will be the catalyst for the euro's growth. If in the first half of the day we observe the return of pressure on the euro, it is best not to rush into long positions. The optimal entry point will be when a false breakout forms at 1.1287 with the prospect of a return to the rather important resistance at 1.1318. The test of this level from top to bottom forms another entry point for buying the euro with an increase to the 1.1353 area. Only the 1.1381 area remains above this level, which is the upper border of a wide horizontal channel - the pair has been in it since November 30. Its breakdown can seriously affect the EUR/USD downward trend, so be very careful at this level. A breakthrough and a downside test of 1.1381 would see a larger advance towards the highs of 1.1415 and 1.1442. The next target will be the 1.1480 level, where I recommend taking profits. If the pair declines during the European session and the bulls are not active at 1.1287, it is best to postpone selling until the larger support at 1.1263. I advise you to buy EUR/USD immediately on a rebound from the 1.1238 low, or even lower - around 1.1214, counting on an upward correction of 20-25 points within the day.

The bears have proven their presence in the market and willingness to act in any of the euro's growth. Today they will wait for strong data on inflation, which should rise well above economists' forecasts, which will only increase the pressure on the euro and lead to the dollar's growth. The main task for the first half of the day is to defend 1.1318, just below which are the moving averages playing on the bears' side. Only the formation of a false breakout there, together with weak data on inflation in Germany, will lead to an excellent entry point into short positions in hopes of maintaining pressure on the pair. The news about the new Omicron strain does not work so well on the markets, since its negative consequences turned out to be less dangerous, so you can gradually forget about it. An equally important task for the EUR/USD bears is to regain control over the support at 1.1287, as they failed to settle below it yesterday afternoon. You can act by analogy with yesterday: a breakthrough and a test from the bottom up at 1.1287 will lead to forming a signal to open short positions with the prospect of a decline to the 1.1263 area. The next target will be support at 1.1238, where I recommend taking profit. If the euro grows and the bears are not active at 1.1318, and it may well be that the bears will let go of the market before entering it after the US inflation data, it is best not to rush to sell. The optimal scenario will be short positions when a false breakout is formed in the 1.1353 area. Selling EUR/USD immediately on a rebound is possible from the highs: 1.1381 and 1.1415 while aiming for a downward correction of 15-20 points. 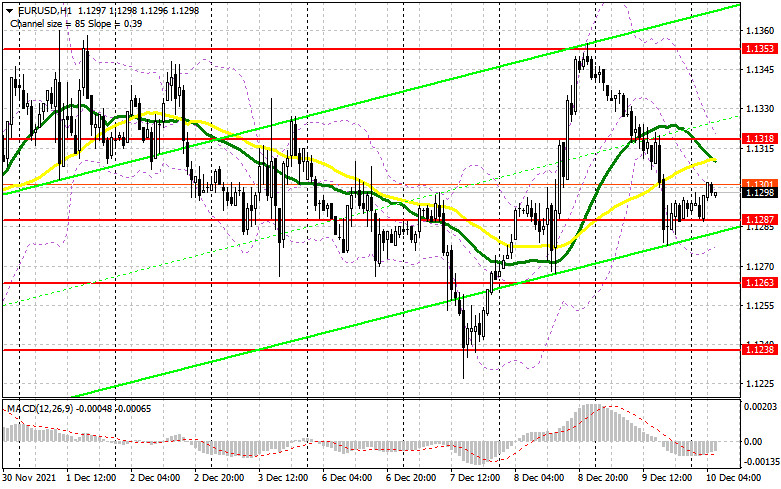 The Commitment of Traders (COT) report for November 30 revealed a decrease in both short and long positions. However, the reduction of long positions still remained higher, which led to an increase in the negative delta. Last week there were a lot of speeches by Federal Reserve Chairman Jerome Powell, who in his comments spoke enough about the expected changes in monetary policy towards its tightening. The reason for this is rather high inflation, which has grown from "temporary" to permanent, which creates many problems for the central bank. The second problem was a new strain of the Omicron coronavirus, which will slow down the global economy at the end of this and early next year, which also restrains the demand for risky assets from bulls. The Fed will hold a meeting next week, at which a decision will be made on the bond purchase program, so demand for the US dollar is expected to remain in the shorter term. The latest November COT report indicated that long non-commercial positions declined from the level of 204,214 to the level of 191,048, while short non-commercial positions fell from the level of 220,666 to the level of 214,288. At the end of the week, the total non-commercial net position increased to -23,240 against -16,452. The weekly closing price, on the contrary, rose much to 1.1292 against 1.1241.