EUR/USD: plan for the European session on December 16. COT reports. Euro has retained its position after the Fed meeting.

Quite a lot of signals to enter the market were formed yesterday. Let's take a look at the 5 minute chart and understand the entry points. In my morning forecast, I paid attention to the 1.1276 level and advised you to make decisions on entering the market. The data on inflation in the eurozone countries, released in the first half of the day, did not give the expected effect, as they coincided with economists' forecasts. As a result, the euro stalled around the 1.1276 level. Several false breakouts of this range resulted in forming signals to open short positions. As a result, the downward movement was about 20 points, after which bulls began to actively defend the support of 1.1255. False breakouts at this level formed good entry points to long positions, however, this happened before the Federal Reserve meeting, so there was no particular demand for the euro. The sharp collapse of EUR/USD after the announcement regarding the monetary policy was stopped by the support of 1.1230, where the formation of a false breakout led to a good signal to open long positions. As a result, the growth amounted to about 70 points. And what were the deals on the pound yesterday? 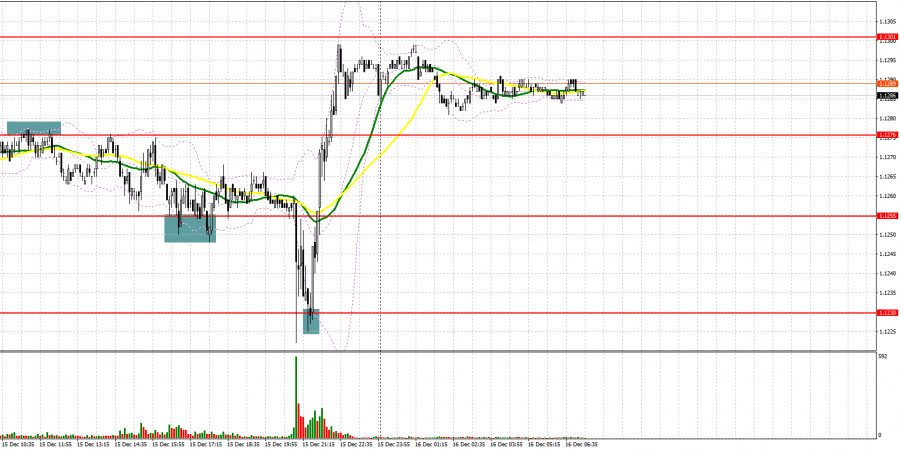 Today we have another important day. Traders will be watching the outcome of the European Central Bank meeting at which some changes are expected to take place towards the future tightening of monetary policy in the euro area. If ECB President Christine Lagarde speaks about high inflation, the demand for the European currency will only increase, as one can expect an earlier increase in interest rates by the ECB next year. From the point of view of bulls, the optimal entry point into long positions will be when a false breakout forms in the 1.1276 area, which was formed at the end of yesterday. An equally important task is to return to a rather important resistance at 1.1301, which has not yet been overcome. Strong data on activity in the manufacturing and services sectors of the eurozone countries will lead to a breakthrough and test of this level from top to bottom, which will form an additional entry point for buying the euro with the prospect of a return to 1.1323. Only the area 1.1353 remains above this level, which is the upper border of the wide horizontal channel. Its breakdown can seriously affect the EUR/USD downward trend, so be very careful at this level. A breakthrough and a downside test of 1.1353 would open the door for larger gains towards the highs of 1.1381 and 1.1415. The 1.1442 level is a more distant target, but only along with a very hawkish policy from the ECB. I recommend taking profit there. If the pair declines during the European session and the bulls are not active at 1.1275, and there, by the way, there are moving averages playing on their side, it is best to postpone long positions until the larger support at 1.1255. I advise you to buy EUR/USD immediately on a rebound from the 1.1230 low, where the pair reversed upward yesterday, or even lower - around 1.1208, counting on an upward correction of 20-25 points within the day.

The bears did their best yesterday, but they failed to get their hands on the market ahead of the ECB meeting. A lot depends on it today. The US dollar is expected to weaken, so be careful with short positions on the pair. The main task in the first half of the day is to protect the 1.1301 level. Forming a false breakout there, together with weak data on activity in the service sector and the manufacturing sector of the eurozone, will lead to an excellent entry point to short positions, counting on the pair being under pressure after the ECB meeting. An equally important task for the EUR/USD bears is a breakthrough of the intermediate support at 1.1276, which was formed at the end of yesterday and where the moving averages are, playing on the side of the bulls. A breakthrough and a test from below 1.1276 will provide a signal to open short positions with the prospect of a decline to the 1.1255 area. The 1.1230 level is a more distant target, where I recommend taking profits. If the euro grows and the bears are not active at 1.1301, it is best not to rush to sell. The optimal scenario will be short positions when a false breakout is formed around 1.1323. Selling EUR/USD immediately on a rebound is possible from the highs: 1.1353 and 1.1381, counting on a downward correction of 15-20 points. However, all this is valid only until the ECB announces its decision on interest rates. 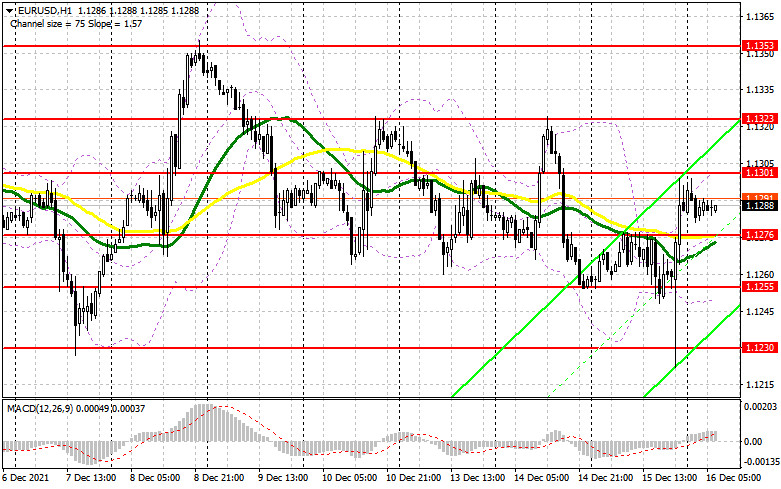 The Commitment of Traders (COT) report for December 7 revealed that short positions decreased and long ones slightly increased, which led to a decrease in the negative delta value. Many traders have been preparing for the central bank meetings this week. Very serious changes are expected in the monetary policy of the Federal Reserve, as well as the European Central Bank. The inflation data is forcing the management to act more aggressively, but knowing which path it will take is rather difficult. Last week, there were several speeches by Fed Chairman Jerome Powell, who in his comments talked enough about the expected changes in monetary policy towards tightening. The Omicron coronavirus strain is also keeping Europeans and Americans awake, dampening demand for risky assets amid uncertainty over the ECB's future policy. The latest November COT report indicated that long non-commercial positions rose from 191,048 to 194,869, while short non-commercials fell from 214,288 to 203,168. important events in the conditions of the formed horizontal channel. At the end of the week, the total non-commercial net position decreased its negative value from -23,240 to -8,299. The weekly closing price, on the contrary, did not change due to the horizontal channel - 1.1283 against 1.1292.

Trading above the 30 and 50 day moving averages indicates an attempt by bulls to take control of the market.

Interesting? Write a comment below.
 EUR/USD: plan for the European session on December 16. COT reports. Euro has retained its position after the Fed meeting.
Forward 
Backward 