EUR/USD. Preview of the new week. After a crazy week, a very boring Christmas week awaits us. 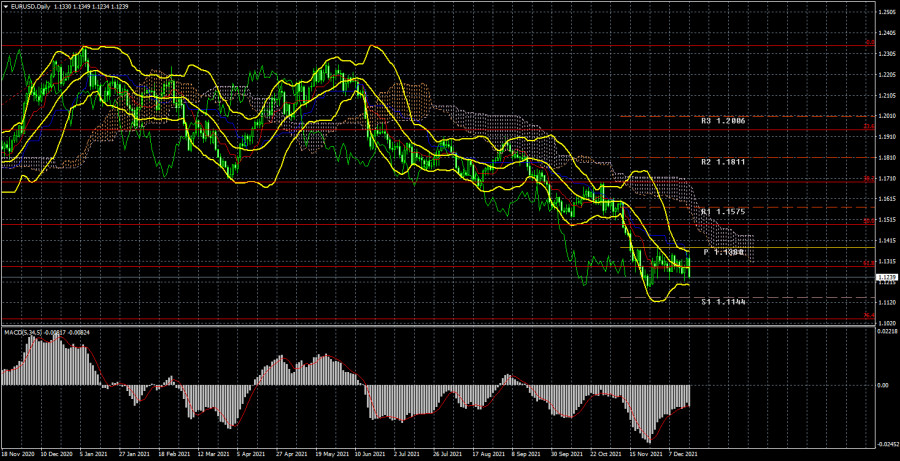 Christmas Week begins, and New Year's Week will immediately follow. Thus, the activity of the markets may begin to decline, and the euro/dollar currency pair may smoothly move to a sideways movement. Although, if you switch to a lower timeframe, for example, a 4-hour one, it is clear that the sideways movement has already begun a few weeks ago. It may not be pronounced, but quotes have been located between the levels of 1.1236 and 1.1360 since November 30. That is three weeks already. Thus, two festive weeks are unlikely to be trending. Of course, it is impossible to be 100% sure of this assumption, but we believe that this will be the case. At the same time, the pair continues to remain near its annual lows. Consequently, the downward trend persists. This means that the downward movement can resume at any moment. The most important thing is that this week the technical picture has not changed at all. Although the meetings of the ECB and the Fed could affect the pair much more than they did in the end. However, even after quite important decisions were made, traders have not yet found grounds for new sales of the pair or new purchases. Although there may be another possible option. After all, this week ended with a fairly strong fall, although no important macroeconomic statistics were published on Friday and there were no important events. Thus, it is quite possible that after a pause of several weeks, bears are now becoming more active. After all, the downward trend persists.

Next week, Friday will be practically a day off. That is, formally, the foreign exchange market will be open, but neither Europeans nor Americans will be on it on this day, since Christmas will be celebrated all over the world. In the European Union, no important events or publications are planned for next week at all. In principle, nothing can be expected from Christine Lagarde right now. Only a couple of days ago, the results of the ECB meeting were summed up and Lagarde had the opportunity to say everything necessary. Thus, even if the ECB head's speech takes place in the new week, it is unlikely to have at least some impact on the market. In the case of the USA, the situation is approximately the same. On Wednesday, a report on GDP for the third quarter will be published, but not in the first estimate. Accordingly, traders are already familiar with the value of this indicator, so a reaction is unlikely to follow. The consumer confidence indicator, unless it fails, as the consumer sentiment index did a few months ago, also has very little chance of affecting the euro/dollar pair. The report on orders for long-term goods, which was once very important, now has almost no weight in the eyes of traders. Data on personal income and expenses of Americans - similarly. So it turns out that there will be practically no important events during the next week, and everything will end with the early start of the weekend. Thus, we do not expect anything extraordinary from both major currency pairs. Most likely, the movements will be as boring as possible. By the way, the British pound showed a fairly high degree of correlation last week with the euro currency. Both pairs continue to be near their annual lows. And even the Bank of England did not save the pound from the final fall. Therefore, it can be assumed that bears continue to dominate in both major pairs. Consequently, it's not even the weakness of the euro or the pound, but the strength of the US dollar, although the British currency has reasons to fall. Thus, it is too early to say that the factors of the growth of the US currency have already been won back by the market. As you can see, market participants continue to pay a lot of attention to the actions and plans of the Fed, which continues to provide strong support to the US dollar. 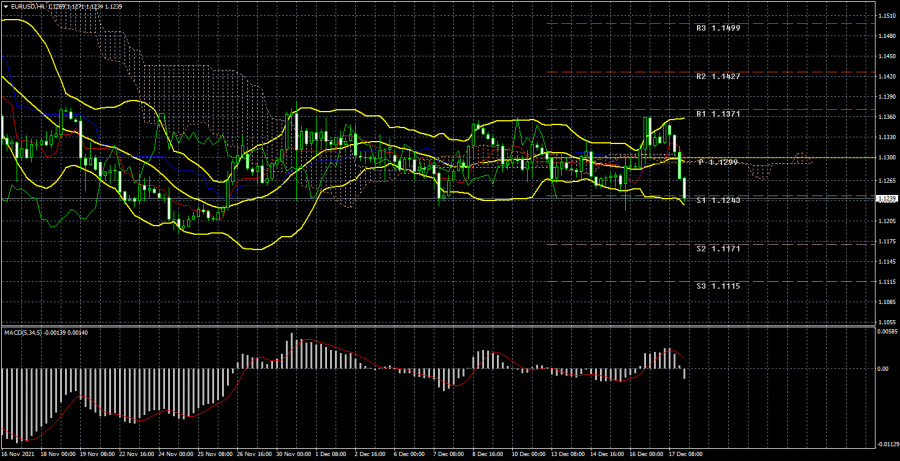 The technical picture of the EUR/USD pair on the 4-hour chart according to the Ichimoku strategy looks extremely eloquent. Bollinger bands have been directed sideways for most of the last three weeks, which signals a flat. The pair is located between the levels of 1.1236 and 1.1360. This week there were two fairly strong movements of the pair, about 130 points each, but even they did not lead to the pair leaving the side channel. Thus, it is not possible to draw any conclusions now, since the Ichimoku indicator is a trend indicator. On an older timeframe, it is clear that the downward trend will continue. Since the 4-hour TF is now flat, then you need to trade either the older timeframes or the younger ones.

Price levels of support and resistance (resistance /support), Fibonacci levels - target levels that are targets when opening purchases or sales. Take Profit levels can be placed near them.