Forecast and trading signals for EUR/USD on December 3. Detailed analysis of the pair's movement and trade deals. Another 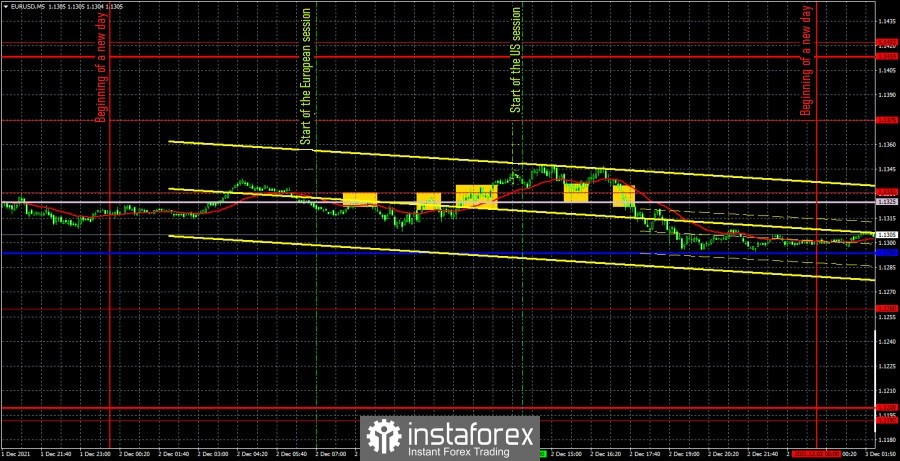 The EUR/USD pair moved mainly sideways again during the penultimate trading day of the week. The total volatility of the day was about 50 points, which, of course, is very small even for the euro. There was a slight spike in activity in the afternoon, but it was not triggered by any major events or reports. Yesterday there was very little important information. Yes, the calendar contained several interesting events. For example, a report on unemployment in the European Union or a report on claims for unemployment benefits in the United States. However, this data has long since caused no reaction from the markets. The same applies to the speech of the US Treasury Secretary Janet Yellen. It's interesting, but markets rarely react to it. Thus. It remains for us to consider only the "technique". And it should be noted that there is not much to consider here. The main thing that traders had to do on Thursday was to determine the flat in time. As you can see, both linear regression channels are directed almost sideways. All trading signals of the day were formed near the Senkou Span B line and the adjacent extremum level of 1.1331. And this is exactly the sign of a flat. However, traders had to work out at least one signal. The first sell signal, like all subsequent ones, turned out to be false. After its formation, the pair managed to go down only 12 points, which was not enough even to place a Stop Loss order at breakeven. Thus, the deal ended up closing at a loss of about 17 points, when the pair crossed the Senkou Span B line. It was already clear at that time that the pair was in a flat, and nothing would change in the US trading session. All subsequent signals should not have been processed. 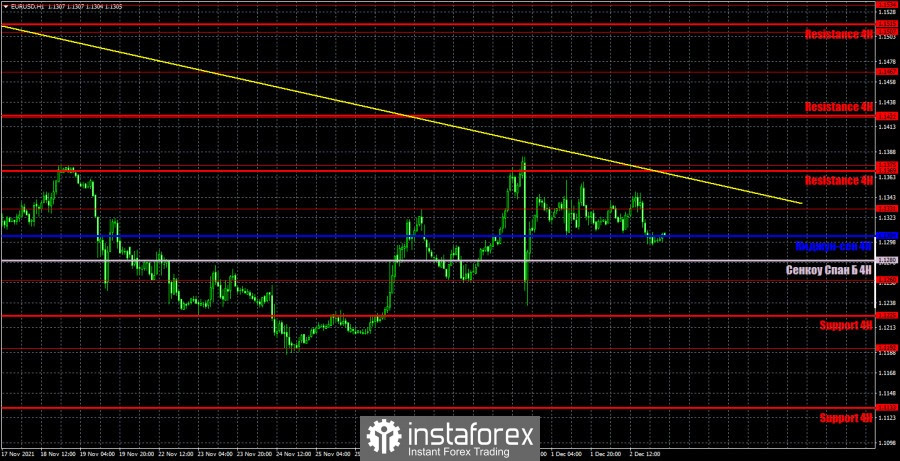 On the hourly timeframe, the flat of the last two days is even better seen. Formally, the downward trend persists, as evidenced by the downtrend line. Thus, if traders manage to consolidate the pair back below the Kijun-sen and Senkou Span B lines, then the euro may resume to fall in the medium term. We highlight the following levels for trading on Friday - 1.1192, 1.1260, 1.1331, 1.1375, 1.1422, as well as the Senkou Span B (1.1280) and Kijun-sen (1.1304) lines. The Ichimoku indicator lines can change their position during the day, which should be taken into account when looking for trading signals. Signals can be rebounds or breakthroughs of these levels and lines. Do not forget about placing a Stop Loss order at breakeven if the price moves 15 points in the right direction. This will protect against possible losses if the signal turns out to be false. The European Union will host a speech by European Central Bank President Christine Lagarde on December 3, as well as the publication of an index of business activity in the service sector and a report on retail sales. However, more important events are planned in the United States, where the unemployment rate, NonFarm Payrolls and data on changes in average wages will be published. And also the index of business activity in the service sector ISM, which is also quite important.

Overview of the EUR/USD pair. December 3. The omicron strain - all over again... There is no exact information, but the whole world is in a panic.

Forecast and trading signals for GBP/USD for December 3. Detailed analysis of the movement of the pair and trade deals. 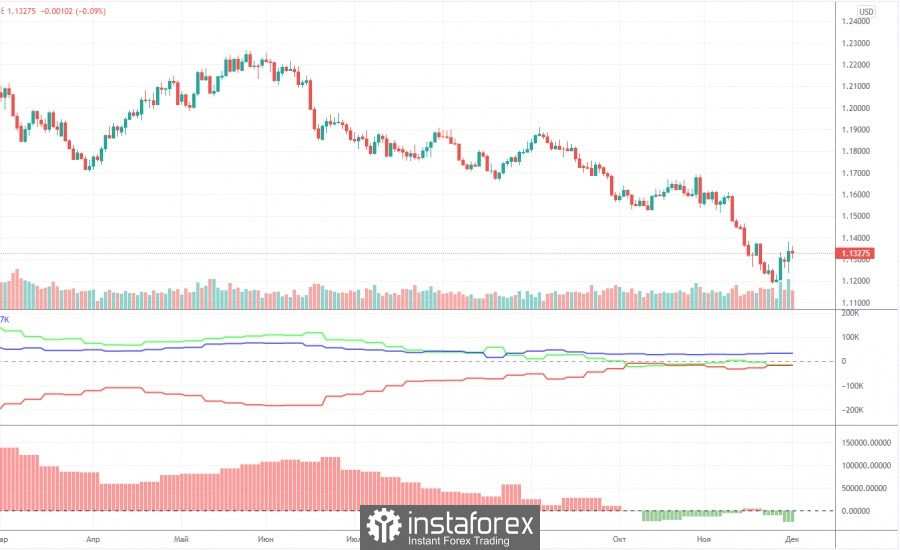 The mood of non-commercial traders has changed quite a lot during the last reporting week (November 16-22). A group of "non-commercial" traders opened 6,000 buy contracts (longs) and 20,500 sell contracts (shorts) during the week. Almost the same as the week before. However, if you look at the chart above, it becomes clear that in fact the changes in the last two months are not so big. The most important thing to understand is that the net position of non-commercial traders almost does not change. This is eloquently shown by the green line of the first indicator, which spends almost all the time near the zero level. And the zero level signals a neutral mood of traders. Consequently, according to the euro currency, the most important group of "non-commercial" traders is now in the most neutral mood, since the number of open contracts for buying and selling is almost the same – 206,000 versus 229,000. For example, 100,000 more buy contracts were opened in June. Thus, despite the fact that the euro/dollar pair is near its annual lows, commercial traders are in no hurry to continue selling euros. Perhaps because the dollar has already risen quite well this year. Perhaps because traders are waiting for the Fed's last meeting this year, which will show whether Federal Reserve Chairman Jerome Powell is ready to move from words to deeds and start fighting rising inflation by leaps and bounds. We believe that the market is now in a wait-and-see position.

Interesting? Write a comment below.
 Forecast and trading signals for EUR/USD on December 3. Detailed analysis of the pair's movement and trade deals. Another
Forward 
Backward 